‘Rahul should take decision instead batting from behind’ 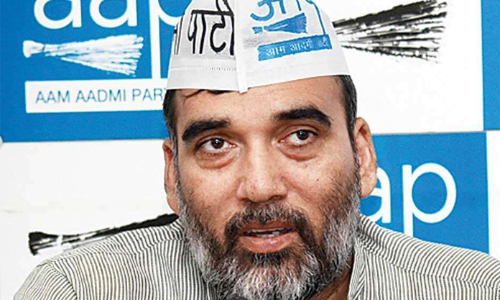 Amid a flipflop over alliance with the Congress to take on the BJP in the Lok Sabha polls, the AAP on Thursday said Rahul Gandhi should take a decision about the seatsharing with it considering the national situation, instead of batting from behind his partys Delhi unit

New Delhi: Amid a flip-flop over alliance with the Congress to take on the BJP in the Lok Sabha polls, the AAP on Thursday said Rahul Gandhi should take a decision about the seat-sharing with it considering the national situation, instead of “batting from behind” his party's Delhi unit.

“The AAP took an ideological decision for alliance, keeping in view the need to save the democracy and to strengthen the voice of Delhi people in the Lok Sabha, although objections were raised within the party,” AAP’s Delhi convener Gopal Rai said.

The comments come after Gandhi this morning said that the Congress’ State unit does not want an alliance with the AAP. “I feel Rahul Gandhi is either not comprehending the national situation or he is unable to make his party organisation understand it.

Instead of batting from behind his state unit, Rahul should take a decision (on alliance),” Rai said. “Our workers do not want alliance. Many leaders are personally against it. But, the decision for alliance was taken in favour of the national interest,” he added.

Talking to reporters, Rai said it is a different matter what Delhi Congress says about the alliance but Gandhi should “responsibly” take a decision in this regard considering challenges faced by the country like the “dictatorship” of the BJP government at the Centre.

Lok Sabha election is not for Delhi alone, it will decide the future of the country. Its duty of national president of a party to think over and take decision according to the situations faced by the country, he said. “It is Rahul Gandhi's responsibility to make his state unit understand it.”

Meanwhile, on Wednesday the Congress had claimed that nine MLAs of the AAP were in touch with it and wanted to change sides. The remarks came after suspended AAP MLA and former minister in the Kejriwal’s government, Sandip Kumar visited the Delhi Congress office on Tuesday and met Dikshit.