India on the cusp of smart age 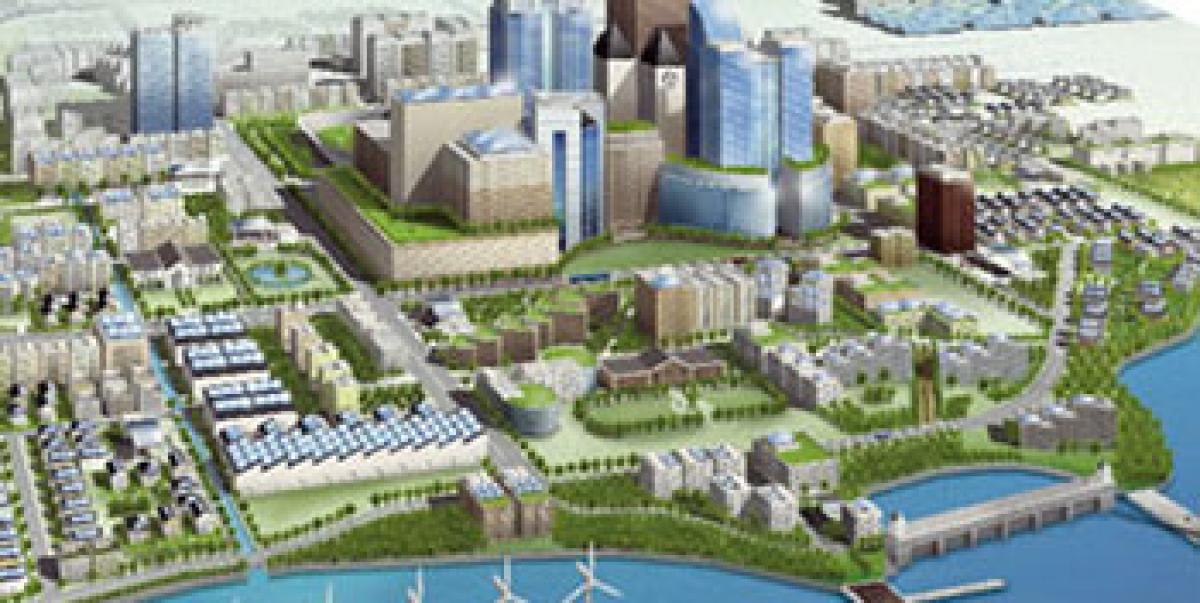 India has become more vibrant than ever now-a-days. It is undergoing what is hitherto an unknown phase of internal churning. Age-old beliefs,...

New Urbanism is focused on design, which is critical to the function of communities. The size and shape of a plaza will help determine whether it is consistently alive with people or windswept and vacant. The organisation of buildings in a neighbourhood will help establish its character. Combining appropriate design elements makes places that are greater than the sum of their parts. It is holistic, too

India has become more vibrant than ever now-a-days. It is undergoing what is hitherto an unknown phase of internal churning. Age-old beliefs, practices, values and traditions – good, bad and the ugly ones – are all being questioned by ordinary people. Men, women and children are raising their voices all across the nation on varied issues. The quest to reach new frontiers of modernism is breaking several barriers.

Rules, norms and practices are being contested in one corner of the country or the other every day. Discrimination, both social and gender, is making headlines. Just look at the way, the eating practices that have become live national debates! Clash of ideas is peaking up.

People are just demanding their share of the pie in everything – from religion to resources. This 'neo-civil disobedience' being witnessed in the country is not a tamasha as being described by some. It is regrettable that some prefer to say so.

The Indian democracy is in full bloom. All this churning is more in the nature of assertion of rights by groups and individuals. (Of course, when it comes to questioning religious canons, many are bound to say "if only this were to be about Islam would you dare to? Come on, would you stop reforming yourself and thus refine one’s outlook just because the others are not poised to do so?).

I see in all these not just identity (don't add politics to this, please) but only their aspirations and dreams. There is nothing illusory about any of these. The march towards modernity is bound to happen at one stage or the other. For long, we, Indians, have lived smugly in our own cloistered world of casteist patriarchal societies, unmindful of the strides that some societies are making with the help of forward-looking ideas and technologies.

It is always good to be looking inwards. Still better, if we start questioning ourselves. It is only then that a new India emerges. This process also needs a churning on a different plane. As we embark on a journey towards modernity, our living spaces have to change accordingly. It is not just about good roads and modern rapid transport systems.

It is all about incorporating rapidly changing technology into our lifestyles. Because this technology has the potential to fill the gaps in our psyches. Technology bridges even the unfathomable gaps in the society as nothing else could.

It is in this context that I was eagerly looking forward to the announcement of the winners of the meritorious Smart City competition conducted by the Union Ministry of Urban Affairs. What are the planners dreaming to design in smaller cities and towns of India?

How are they going to make technology touch the lives of people on an experimental basis in some corner or the other of their urban centres? As mentioned earlier, city planning is not all about just amenities. It is all about how a city plans to engage its citizens all along.

Bhubaneswar in Odisha which topped the list of the first 20 smart cities scoring more than 73 per cent points is dreaming of creating a model of sustainable urbanisation based on new urbanism principles that have the transformative potential to provide citizens with prosperity, safety and equity. The Odisha capital topped the list perhaps to this fact that it is the only city that conceptualised New Urbanism as a tool for change.

New Urbanism is a planning and development approach based on the principles of how cities and towns had been built for the last several centuries: walkable blocks and streets, housing and shopping in close proximity, and accessible public spaces. In other words: New Urbanism focuses on human-scaled urban design.

The principles, articulated in the Charter of the New Urbanism, were developed to offer alternatives to the sprawling, single-use, low-density patterns typical of post-WWII development, which have been shown to inflict negative economic, health, and environmental impacts on communities.

The Congress for New Urbanism (based in Chicago) believes that these design and development principles can be applied to new development, urban infill and revitalisation, and preservation. They can be applied to all scales of development in the full range of places including rural main streets, booming suburban areas, urban neighbourhoods, dense city centres, and even entire regions.

New Urbanism wants to see those human-scale neighbourhoods return by creating tools to reform zoning and street design and develop diverse neighbourhoods. It advocates for villages, towns, and cities consisting of neighbourhoods designed around a five-minute walk from center to edge. These ideas are fundamental to New Urbanist thinking.

When implemented properly, Bhubaneswar would be witnessing placemaking and public space a high priority of its project. Though it has envisaged only 985 acres of smart city in this phase centred around main railway station in the heart of the capital, its streets would be designed for people — rather than just cars — and accommodate multimodal transportation including walking, bicycling, transit use, and driving with daily interaction of public life places like plazas, squares and sidewalks.

Bhubaneswar plans to become a child-friendly city providing accessible, safe, inclusive and vibrant public places while nurturing a resilient, clean, green and healthy environment. It proposes to have a regional economic centre attracting knowledge-based enterprises and sustainable tourism activities by leveraging and empowering its institutions, local businesses and informal workforce.

The state-of-the-art intelligent city operations and management centre will be at the core of its pan-city proposal (replicable model). It would help provide digital platform for integrating multiple city sub-systems of traffic management, parking, bus/para-transit operations, common fare card, emergency response and city incident management along with seamless integration of Bhubaneswar Town Centre District's utility operations requirements. All this comes with a price and it is going to cost Rs 4,537 crore for this to happen.

New Urbanism is pragmatic. Great design is not useful if it can't be built. New Urbanists work with and include production builders, small developers, traffic engineers, appraisers and financial institutions, public officials, citizens and others with influence over the built environment to come up with implementable solutions as envisaged by the Congress for New Urbanism.

New Urbanism is focused on design, which is critical to the function of communities. The size and shape of a plaza will help determine whether it is consistently alive with people or windswept and vacant.The organisation of buildings in a neighbourhood will help establish its character. Combining appropriate design elements makes places that are greater than the sum of their parts. It is holistic, too.

However, all scales, from the metropolitan region to the single building, must be related. A building that is connected to a transit stop will help the region function better, and well-organised region benefits the buildings within it. Streets that rely only on engineering tend to move automobiles and little else; all disciplines related to the built environment must work together to create great places.

In the next four years, if Bhubaneswar could do this (because this is the only city that has envisaged integrating New Urbanism concept) it would set an excellent example. An example, let us hope the Amaravati planners, too, would replicate in Andhra Pradesh.

Such cities blur several lines that divide people and help integrate them. Such urban spaces would be more democratic in nature offering equal access to the joy of living to all. In the cry for gender parity on the streets of Shani Singnapur in Maharashtra to the dream of urban planners in Bhubaneswar, the aspirational India is waking up. Welcome to the New Age!