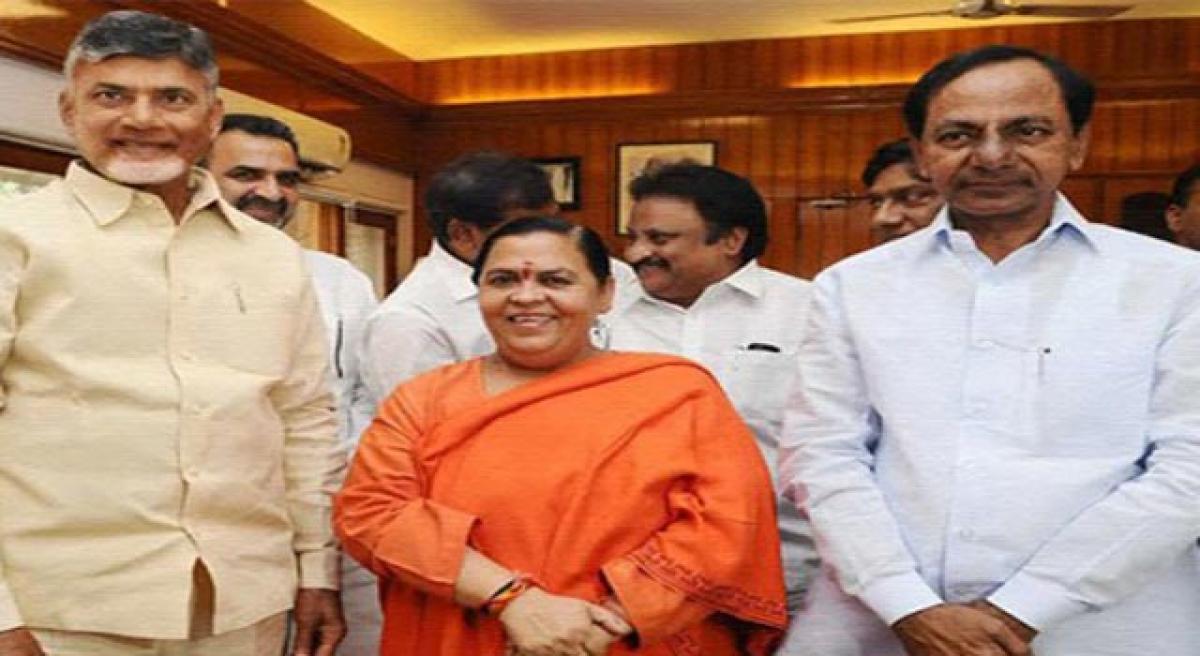 The Chief Ministers of the two Telugu-speaking States, have knowingly or unknowingly seem to have established a fine precedent, or thereabouts, for...

The Chief Ministers of the two Telugu-speaking States, have knowingly or unknowingly seem to have established a fine precedent, or thereabouts, for Karnataka and Tamil Nadu on resolving thorny inter-State issues considering the bad blood that has spilled between the States over sharing of Kaveri waters.

Both the Telangana State Chief Minister K Chandrasekhar Rao and his Andhra Pradesh counterpart N Chandrababu Naidu proved that long pending problems can be handled amicably provided the parties concerned have the political will to solve the issue, if not for anything at least to bring respite to the people of their respective States.

Better sense has prevailed eventually, which is a welcome development considering the fresh row that erupted between Telangana and Andhra Pradesh over the execution of Palamuru Ranga Reddy lift irrigation project and Dindi balancing reservoir. Tempers ran high in parts of Telangana after objections were raised by the Naidu government.

What precipitated the controversy was a letter from the Central Water Commission (CWC), seeking clarification from the Telangana government on the two projects. Andhra Pradesh Irrigation officials shot-off a missive to the CWC against the projects. The officials sought CWC to prevail upon the Telangana government to submit detailed project reports (DPRs) of the Palamuru-Ranga Reddy and the Dindi Lift Irrigation schemes.

However, Telangana Irrigation Minister T Harish Rao pointed out that both projects had been granted all required permissions before the bifurcation of Andhra Pradesh. The administrative approval for Palamuru-Ranga Reddy project was given in 2013 while Dindi’s came in 2007.

“It is ironical that a necessary follow-up action was not taken on the two important projects contemplated to meet the justified requirement of the people in Mahabubnagar, Ranga Reddy and Nalgonda districts,” the minister lamented.

The Palamuru-Ranga Reddy project is designed to lift 90 TMC ft flood water from the foreshores of the Srisailam reservoir at the rate of 1.5 TMC ft per day for 60 days. It is proposed to irrigate seven lakh acres in Mahabubnagar, 2.7 lakh acres in Ranga Reddy and 0.3 lakh in Nalgonda, besides providing 20 TMC ft water for drinking and industrial needs in Hyderabad.

The TS government claimed that it is a backward state and the cultivation areas under projects were very less. Hence, the compelling need for expediting works and rendering justice to the perennially ignored region.

They also said that these projects were conceived during the undivided Andhra Pradesh days, which meant that they could not be treated as new projects. The TRS government felt that all these disputes could have been resolved in the combined state but the then ruling Congress party lacked the largesse to resolved the disputes as it pertained to Telangana.

In the backdrop of this situation the Centre intervened and convened the apex council meeting that was held in New Delhi recently in the presence of the Union Minister for Water Resources Uma Bharathi. That provided a platform for both the leaders to discuss and come to an agreement. Both the governments were armed with their own objections over certain irrigation projects.

There were arguments and counter arguments but what finally clinched the issue was a well calculated move by the TS government. According to insiders when the Union Minister was seeking more information about the Palamuru Ranga Reddy project, the TS government played a CD of the speech of Prime Minister Narendra Modi before the elections in which he had said that this project would help the State in a big way.

At this point, Uma Bharati exhorted both the Chief Ministers not to precipitate the crisis in true-blue ‘live and let live’ gentlemanly approach. Both of them exhibited statesmanship qualities and agreed to do so and came up with certain suggestions like fixing of telemetry system and constituting a committee to monitor water sharing.

However, the quantum of Krishna waters used by Andhra Pradesh could yet be a bone of contention. Here is where a second round of win-win political wisdom has to be displayed by KCR and Naidu.