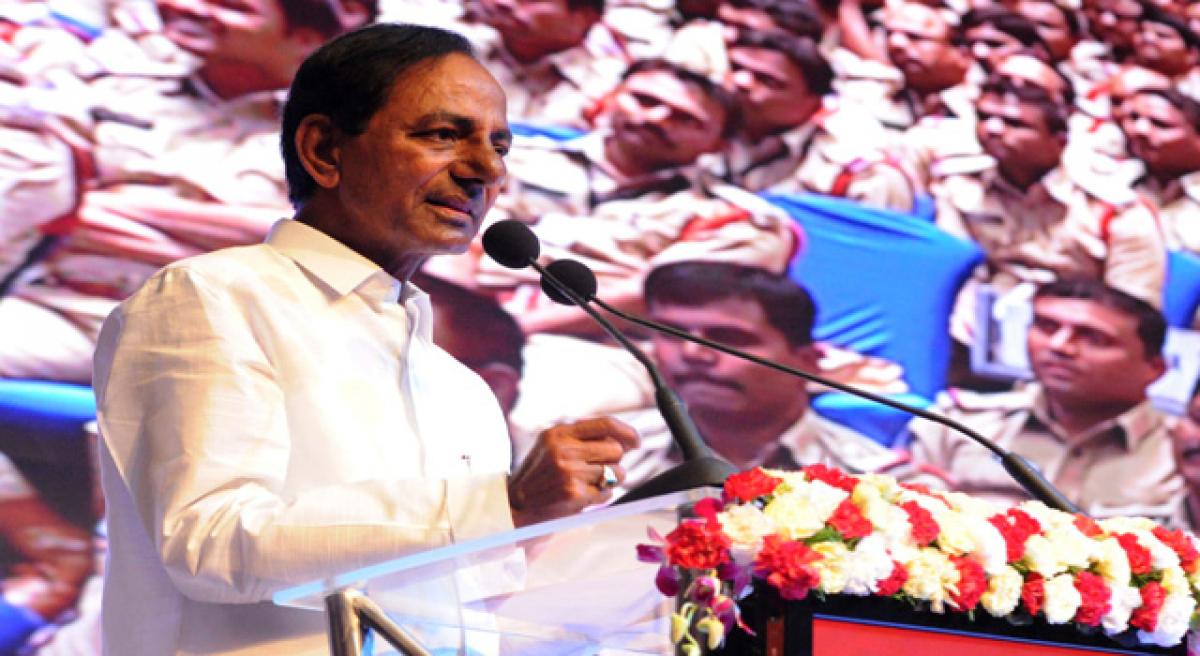 Chief Minister K Chandrashekar Rao has set a new and perhaps a good precedent to interact with over 1,500 police officers.

Chief Minister K Chandrashekar Rao has set a new and perhaps a good precedent to interact with over 1,500 police officers. Notwithstanding the criticism that after the Chief Minister left the venue, none of the lower level officials was involved in the group discussions that took place, the meeting has sent a clear message to the people in uniform that the government not only gives high priority to law and order but also would stand by them and provide necessary technological backup.

KCR heaped praise on the police officers for the good service they are rendering. He assured them that his government would solve all their problems and provide all equipment to make them more efficient. He floored he officials with his oratory. SI to DGP felt that they were important, at least till the CM left the venue.

He not only lauded their role in the struggle for separate Telangana but also gave them full marks for the success of TRS in GHMC elections. While this might have made the police very happy, it definitely sends a wrong signal that the government might use police in future elections which is not good for democracy.

The government, of course, deserves a pat for having succeeded in ensuring good law and order situation in the new state and it had certainly done a good thing by providing 4,000 new vehicles and necessary weapons. KCR’s speech was a great pep talk. Not only did he mention the problems of police, he also assured them that he would solve them. He also said that his government would be sanctioning Rs 500 crore to procure more modern vehicles for police force.

The dynamism shown by top police brass and creation of SHE teams have undoubtedly shown good results. But then it does not mean that there has been total transformation of the police. Yes, the police stations have become modern with special counters but when it comes to being people-friendly, they need to go a long way.

The police are primarily responsible for the maintenance of public order, prevention and detection of crimes in the state. They protect the life, liberty and property of the people. Hence, the role of the police has become more important than before. Without the police, there would be chaos in the society and the people would live in Hobbesian state of nature in which life would be, "solitary, poor, nasty, brutish and short."

The police play an important role in the administration of justice. In theory, one's safety and liberty depend upon the law and constitution, but, in practice, the laws and judicial decisions are enforced by the police. Thus the police are the saviours of modern civil society. All this would be possible if there is no or very little political interference and the police top brass also do not try to overdo things to please the people in power.

Small incidents like the one that was witnessed on May 15 when the opposition gave a call for ‘Capture Dharna Chowk,’ where a local inspector and team of SIs were caught in civil dress holding placards need to be avoided. The statement made by the Home Minister denying the role of SI and commenting that the SI had taken took the placard to control the disruptive situation and media in their enthusiasm took the photo of it was contradicted by the manner in which the police made her scapegoat – it exposes the vulnerability of the men in uniform.

There is no dearth of dynamism among the officials but the mindset of lower rung officers needs to change a lot. Newer strategies to emerging problems like increasing road accidents and other such incidents need to be evolved. Of late, many instances of police getting involved in civil disputes and corruption have been widely reported. Besides measures necessary to get the best out of police force, there is a need for behavioural change in their functioning and attitude to remain responsive to the needs of common man.