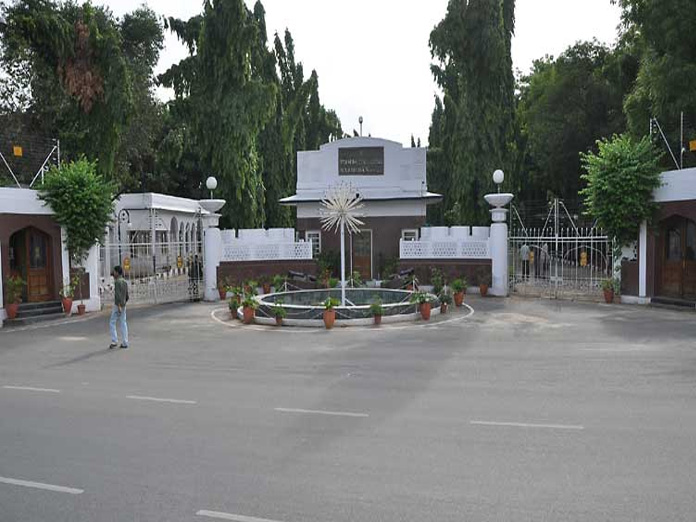 The plush lawns of Raj Bhavan, were clean and wellkept Piled on tables all around were the most inviting dishes waiting to be sampled And as one...

The plush lawns of Raj Bhavan, were clean and well-kept. Piled on tables all around were the most inviting dishes waiting to be sampled. And as one surveyed, the invitees - a literal who‘s who of the State and the city gathered in small groups, waiting for the Governor, the mind travelled back in time and many recollections flashed before its eyes. Some four decades ago, this columnist entered these premises, having been appointed as the Secretary to the then Governor (the charming and gracious Mrs. Sharda Mukherjee).

1977. The Janata government had just taken over at the Centre, although, true to its form, the Congress returned to power in Andhra Pradesh State. Mrs. Mukherjee was enthusiastic and amazingly energetic, eager to serve the people of the State, especially in the wake of the cyclone that had ravaged the coastal areas. Though the stint in the Governor’s office was a far cry from the breathless activity of the field, the experience proved memorable in many ways.

While the proximity to ground-realities was missing, the perspective which the view from the top offered many compensations – especially one of meeting many distinguished, persons. ...One of the first such opportunities arose when Bhagwan Sai Baba accepted the invitation to dine with the Governor. I was the only other person present at the meal. The conversation naturally centred around the spiritual and the religious and I was mesmerised by the simple but earthy profundity of the philosophy Saibaba articulated.

Of quite a different genre was the meeting with HM Patel (then the Union Minister of Finance). Patel had concluded the day’s engagements and was all by himself in the guest house. And the Governor asked me to keep him company for his customary evening drink before dinner. Perhaps she was constrained to do this as, while she was a fairly modern person in terms of social behavior (being the wife Subroto Mukherjee who was the first Indian Air Chief).

She had Prime Minister Morarji Desai breathing down her neck, brushing important things aside, and always wanting to know about things like whether cigarettes or liquor being served in the Raj Bhavan! It was indeed a heady and rewarding experience for a young greenhorn to spend an hour with one of the most illustrious civil servants the country has produced – and one who had risen to such a high position.

As one looked around, every nook and cranny of the place brought back memories. The elevated veranda joining the main house and the lawns served as the platform for swearing in ceremonies, the first of which I saw was K C Abraham being sworn in as the Governor after Sharda Mukherjee had been transferred to Gujarat. As required by protocol, I had earlier travelled to Cochin to fetch him to Hyderabad.

The taste of the delectable chicken stew, and “appams”, served for breakfast at his place still lingers in the mouth! My first act after his taking over was to request the Governor to relieve me, as I had not been a willing candidates for the job even initially, and only joined out of respect Mrs Mukherji‘s wishes.

Abraham, predictably, was unwilling to let go of me, and we entered into a pact - that I would stay for one year, and then return to the field. He was as good as his word and let me go after the agreed period, though with tears in his eyes. Thus, ended my association with a great freedom fighter whose principled stand had led to the historic vertical cleavage in the Congress, setting the stage for a number of dramatic consequences.

My eyes moved next to the main entrance leading to the Darbar Hall. That was where Mrs Mukherji and Dr M Channa Reddy (the then Chief Minister) had the first of their face-offs, with yours truly being the victim of an unfortunate misunderstanding. Channa Reddy had arrived late for a banquet hosted by the Governor. After receiving him, I tried to guide him towards the High Table where the meal had already begun (he himself was no stranger to the fact that events of that nature followed a pre-set minute to minute programme).

But he picked up a plate in the outer room where other guests were dining. The Governor rushed down and led him his appointed place. The Chief Minister was perhaps hurt by the incident (although the Governor was not really at fault). It was weeks later when, after one of the CM’s visits to Raj Bhavan, I was seeing him off, when he made a comment about my contributing to disharmony between the Governor and the government, taking me by surprise. Before I could reply, his Special Assistant, also with the CM in the car gestured me to let the matter rest there.

It was only a long time later that I learnt the fact that the CM was under the impression that I had failed in my duty to persuade the Governor not to go to attend the inaugural function of the Eenadu newspaper in Vijayawada. Firstly, I was away at that time, attending to a personal matter in Delhi. Secondly, it is only up to a point that the Governor seeks advice in matters relating to attending functions. And, in any case, I would have found nothing wrong with her attending the said event.

In any case, that was only one of many interesting encounters which I had with Dr Channa Reddy who from the beginning to the end of our relationship, reflected a love-hate relationship. But, then, Channa Reddy (whose birth centenary, incidentally, falls this year) was a unique and striking personality in many ways. His tenures in the Raj Bhavans of (the then) Uttar Pradesh, Rajasthan and Tamil Nadu were replete with instances which left a permanent impression on the administrations of those States.

While he demanded, and was given, every bit of the respect due to the gubernatorial office when he was the Governor, it was completely in keeping with his personality that, upon becoming the Chief Minister of Andhra Pradesh State for the second time, his attitude was no different from those who maintain that the Governor’s post is no longer relevant in the changed context of our country’s political realities!

Recollections of the days with Sharda Mukherjee took the mind back to her sending me to Anand to study the Amul pattern of dairy cooperatives, and the delicious lunch I had with the legendary Verghese Kurien and his charming wife. In fact, that meeting very nearly resulted in my getting recruited into the National Dairy Development Board, of which Kurien was then the Chairman, a tempting offer which only my commitment to the service made me refuse.

Thoughts also went back to Dr MS Swaminathan releasing my book “Forgiving Earth” (The Dynamics of Policy Support Reforms for the Millennium Farmer in the Asia Pacific Region) again in the Darbar Hall, in the presence of the then Chief Minister YS Rajasekhar Reddy, I was jolted out of my reverie as the band played the last few notes of the anthem and the invitees began slowly to disperse. I looked at my good friend and batchmate in service ESL Narasimhan, the present incumbent of that glorious mansion. The only four-month stint he did as a Superintendent of Police of a district in the State of Andhra Pradesh was in Ongole where I was posted as the Sub Collector.

Young, and enthusiastic, we spent some happy and exciting days together, before his departure to Delhi for a posting in the Intelligence Bureau, where he spent the rest of his illustrious career. I also recalled with pleasure and pride the effective warmth with which he referred to his relationship with me while releasing my book “Trekking Over Pebbles - Life Through a Hyderabadi’s Looking Glass”. And so it was, back to the world of today’s reality - of frustrations and fulfilment, of disappointments and hope.