Wider screen and new technologies ? Who is attracted to it more ? Kids or adults ?? 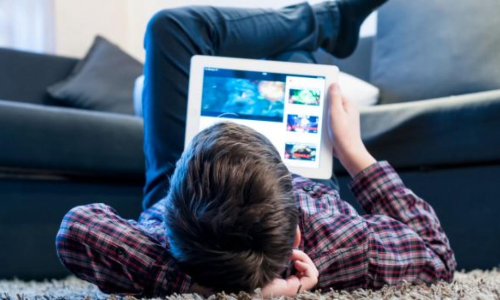 Jen Bjorne a US paediatric speech pathologist said while it\'s quite unrealistic for many families to totally do away with screen time, balance is key she recommends using visual schedules that toddlers can understand to set limits.

Yes! Is the feel what one gets when they know that a new gadget has been launched with a wider screen and a new technology. But did you ever think of who is getting prey to this new technology? None other than your kids aged 8 and below they spend about 48 minutes a day on the cellphones.
But experts say no need to fret about this.

Parents of young children have long been hearing about the perils of screen time and with more wider screens and technology coming up the message gets louder and louder. However plenty of parents feel guilty about it some experts say it might be the time to relax a bit. While overall numbers have held a steady in recent years kids are shifting to mobile devices and other new technologies just as their parents are.

The survey found that kids spend an average of 48 minutes a day on mobile devices up from 15 in 2013. Kids are also getting exposed to voice activated assistants. Virtual reality and internet connected toys for which guidelines exist because they are so new.

Jen Bjorne a US paediatric speech pathologist said while it's quite unrealistic for many families to totally do away with screen time, balance is key she recommends using visual schedules that toddlers can understand to set limits.