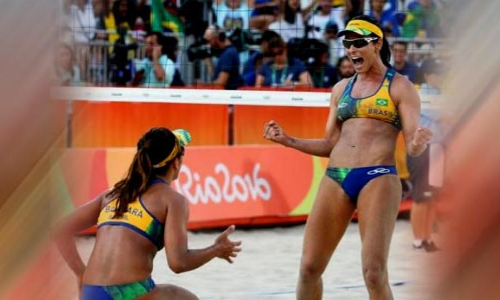 In what might well become the defining image of Brazil\'s Olympics, the beach volleyball competition opened on Rio\'s iconic Copacabana beach on Saturday to the cheers of hundreds of fired-up Brazilian fans.

In what might well become the defining image of Brazil's Olympics, the beach volleyball competition opened on Rio's iconic Copacabana beach on Saturday to the cheers of hundreds of fired-up Brazilian fans.

With the Atlantic Ocean glistening behind the 12,000-strong purpose-built arena, Brazilians revelled in having one of their favourite sports played on one of the world's most famous beaches.

"It's like a spoon to sugar. The perfect pairing," exclaimed shirtless bartender Wilson Pucci, 40, from the vertiginous stands as he watched local male favourites Alison Cerutti and Bruno Schmidt win their match.

Cheers, chants of "Brazil", and blaring Latin American pop hits filled the arena. For those who had flown in from afar, the vibe was unbeatable.

"When you feel like there is nowhere else in the world that is better to be than right here, right now, that's a great feeling and that's what I've got today," said Dan Rookwood, 38, visiting from New York.

"It's a massive bucket-list item ticket," he said above the roars.

With past Olympic beach volleyball games played at parks, on royal parade grounds, or even next to car parks, the Rio beach venue was a godsend for players too.

"When I walked in, I actually got a little bit emotional," said Italy's Adrian Carambula, 28, who with his partner Alex Ranghieri beat Austria's Alexander Horst and Clemens Doppler in the first match.

"I was expecting it, I embraced, and I play with it."

But another notorious facet of Brazilian life was on display as scores of fans were stuck in long queues that stretched along the Rio beachfront, leaving athletes initially competing in front of many empty seats.

Games organizers blamed the snafu on a lack of coordination between various groups of security personnel, including the police, Games staff and private security firms.

Most beach volleyball seats were filled by midday though, and spectators said they had no problems attending the afternoon games.

"I got in easily. It took about half an hour," said Hilda Mendonca, 60, clad in a sparkling yellow top featuring the Brazilian flag as she cheered from the stands.

"It's marvellous. This is a performance, a show, and that's how it's going to be until the end!"