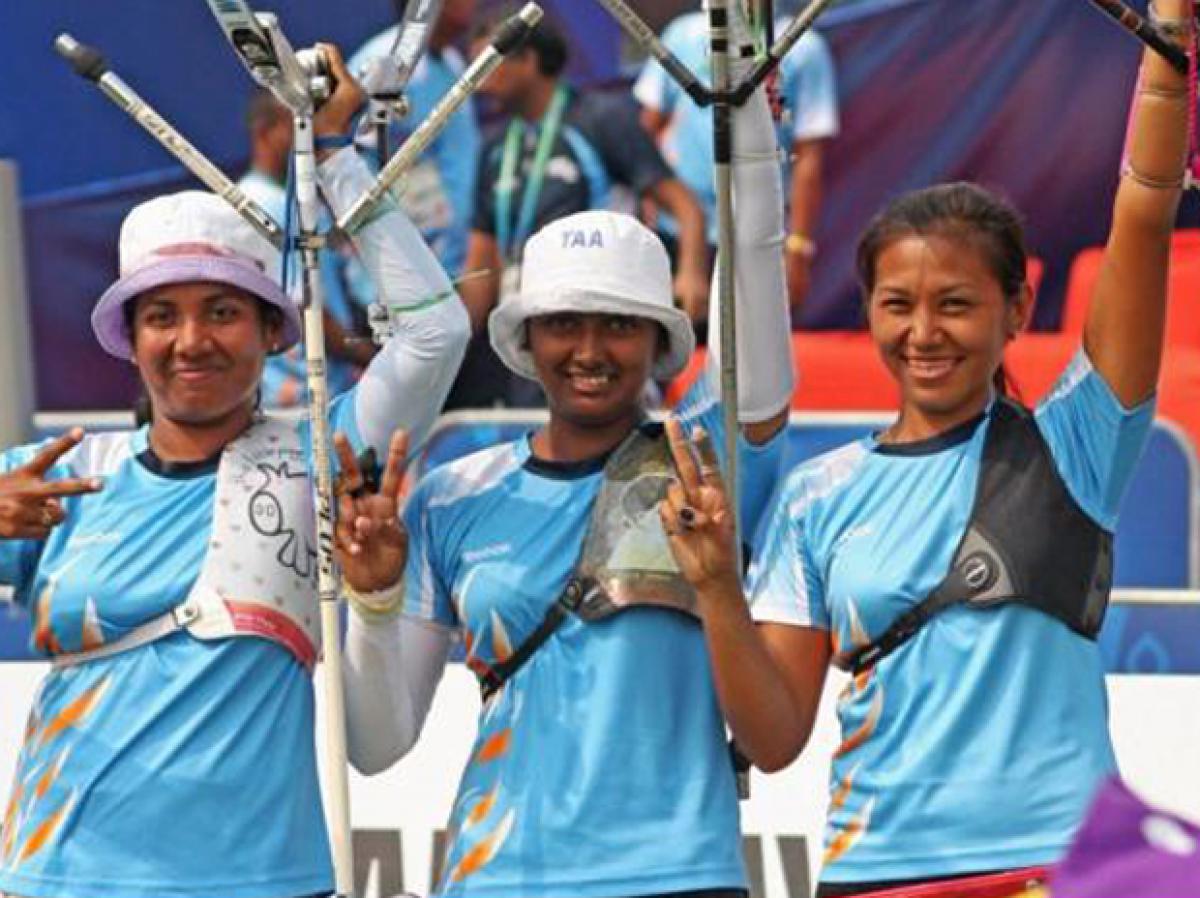 Rio de Janeiro:The Indian women\'s archery team crashed out of the Rio Olympics after losing to Russia in the quarter-finals at the Olympic archery stadium here on Sunday. The Indians, who had clinched a silver in the 2015 World Championships, turned in an inconsistent show to lose 23-25 in the shoot-off after both teams were locked 4-4 on points, having won two sets each.

Rio de Janeiro:The Indian women's archery team crashed out of the Rio Olympics after losing to Russia in the quarter-finals at the Olympic archery stadium here on Sunday.

The Indians, who had clinched a silver in the 2015 World Championships, turned in an inconsistent show to lose 23-25 in the shoot-off after both teams were locked 4-4 on points, having won two sets each.

The Russians, who had won the World Championships last year, will take on Italy in the semi-finals.

Laishram Bombayla Devi was the best performer on the day with a series of consistent attempts. Her efforts, however, went in vain as teammates Laxmirani Manjhi and Deepika Kumari were a tad too inconsistent.

Bombayla Devi later said that "when a gust of wind comes, you have to go ahead and shoot, you cannot wait or you may do much worse."

Deepika Kumari got a bit riled when a journalist asked her that had she hit the perfect score of ten, the Indian team could have won. "You should come and see at the spot. We want to hit a ten every time," she said.

Manjhi in particular was not in the best of form and registered poor scores at crucial junctures that ultimately cost the Indians the match.

Head Coach Dharmendra Tiwari said that strong gusts of wind at least twice before the Indian team's turn may have been a strong factor in the loss. "The girls have not practiced much against strong winds, and in archery that plays a very important role," Tiwari told IANS after the match.

He said it was commendable that they had held the World Champions to a shoot-off, but a little bit of inconsistency problem in the end did not help. Hopefully, in the individual events we will do well. "I have very high hopes from the girls," he said.

But Rajiv Mehta, Secretary-General of the Indian Olympic Association said that overall performance of Indian contestants had been patchy so far. "The girls did well in between but they could not meet up to the expectation in the end. There's no point in blaming any particular factor for the loss," Mehta told IANS.

Minister of Youth Affairs and Sports, Vijay Goel, who witnessed the match said that "there was no point in getting disappointed so early in the Olympics. We expected the girls to do well, but in the end they could not match up to the Russians. We should look forward to other competitions," Goel said.

Among the Russians, Ksenia Perova was the standout performer with Inna Stepanova and Tuiana Dashidorzhieva also coming up with consistent performances.

The Russians enjoyed the better start, taking the first set 55-48. The Indians hit back immediately, narrowly winning the second set with a 53-52 margin.

They took the lead soon after by winning the third set 53-50. But the Russians held their nerve to pull level by clinching the fourth and final set 55-54 despite a strong fight back by India to take the issue into the shoot-off.

Earlier, the Indians progressed to the quarter-finals, beating Colombia 205-197.

The Indian trio started well leading the first set 52-51 with one inner 10 while Colombia managed to hit the bull's eye twice.

In the second set, the Colombian trio of Carolina Aguirre, Maria Ana Rendon and Natalia Sanchez bounced back well to draw level with the scoreline reading 50-49. The set witnessed both the sides scoring three 9s.

The third set witnessed stiff competition from both the sides and ended 52-52. Both sides managed to hit the bull's eye once while India hit three 9s in reply to Colombia's four 9s.

India came out fighting in the final set with four 9s to total 52 before Colombia panicked under pressure to manage only 44, giving India passage to the last-16 stage.