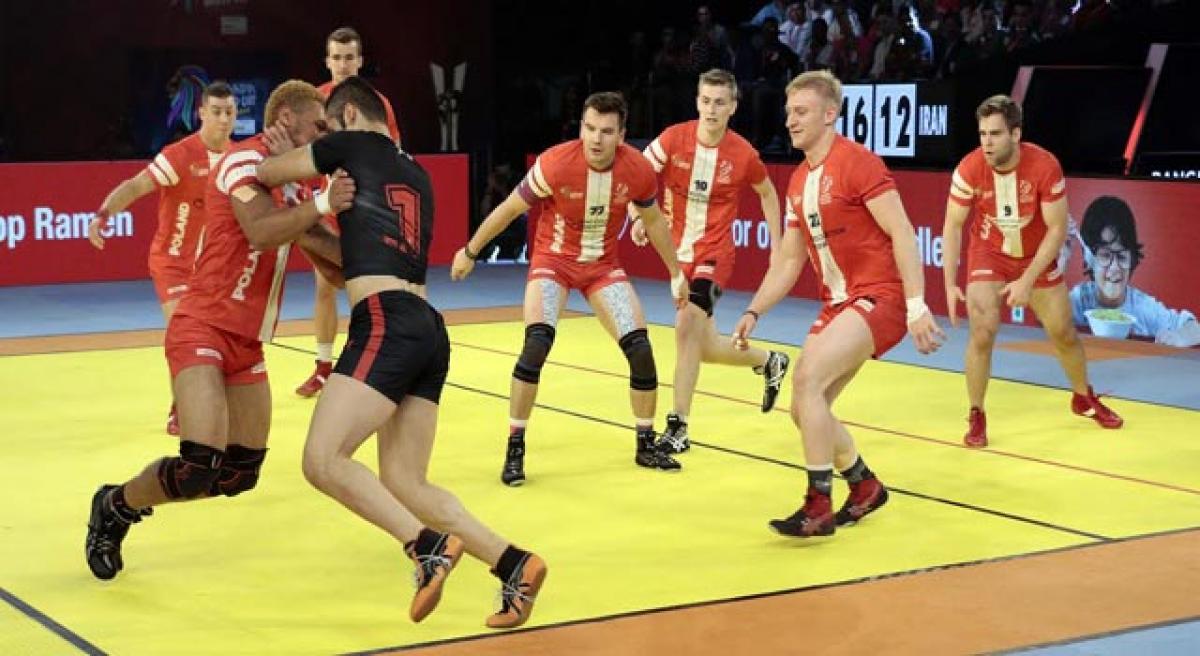 Poland produced a terrific performance to score an upset win as they beat Iran 41-25, which paid a heavy price for complacency even as the as the crowd cheered for the underdog on Monday.

​Ahmedabad: Poland produced a terrific performance to score an upset win as they beat Iran 41-25, which paid a heavy price for complacency even as the as the crowd cheered for the underdog on Monday.

Captain Michal Spiczko led from the front and scored 12 points to lead Poland to a memorable victory. Iran’s mighty defence had a bad day at the office as they scored just six points only two in the second half and were made to pay by the Polish raiders. Iran were below par but that shouldn’t take any credit away from Poland who outclassed them in all departments.

Poland made a good start as Piotr Pamulak scored with a two point raid in the third minute to give Poland a 4-2 lead. Iran leveled the game at 5-5 in the seventh minute. Poland were better than Iran in the first 10 minutes and weren’t intimidated by the Iranian defence. Michal Spiczko scored three raid points as Poland led 9-7 after 10 minutes.

Jan Baranowicz scored with a two point raid in the 14th minute as Poland led 13-9 and Iran were reduced to just three men. Iran forced a super tackle in the 15th minute to trail 11-13. Iran’s defence uncharacteristically made too many silly errors and Poland capitalized on them to lead 16-13 after 18 minutes. Spiczko, Baranowicz and Pamulak scored five points each for Poland in the first half. Iran just scored four tackle points in the half as they trailed 14-17 at the break.

Poland inflicted the first all out of the match in the 23rd minute to lead 23-15 as Spiczko scored two more points. Iran’s defence scored their fifth tackle point in the 25th minute as Poland led 25-16. Iran’s misery got compounded when Fazel Atrachali was forced off the court because of a shoulder injury.

Poland continued their impressive performance in the second half and extended the lead to 10 points after 30 minutes. Iran’s captain Meraj Sheykh scored just one point as their defence continued to flounder with Poland leading 32-21 in the 34th minute. Pamulak scored his ninth point of the match as Poland led 36-21 after 37 minutes.

Poland inflicted the second all out in the 38th minute to complete Iran’s humiliation as they led 40-21. Pamulak scored nine points and Baranowicz contributed eight raid points as Poland wrapped the game 41-25 to score the biggest upset of the 2016 Kabaddi World Cup.