Watch:Kuznetsova hacks off her own hair before saving match point and beats Radwanska 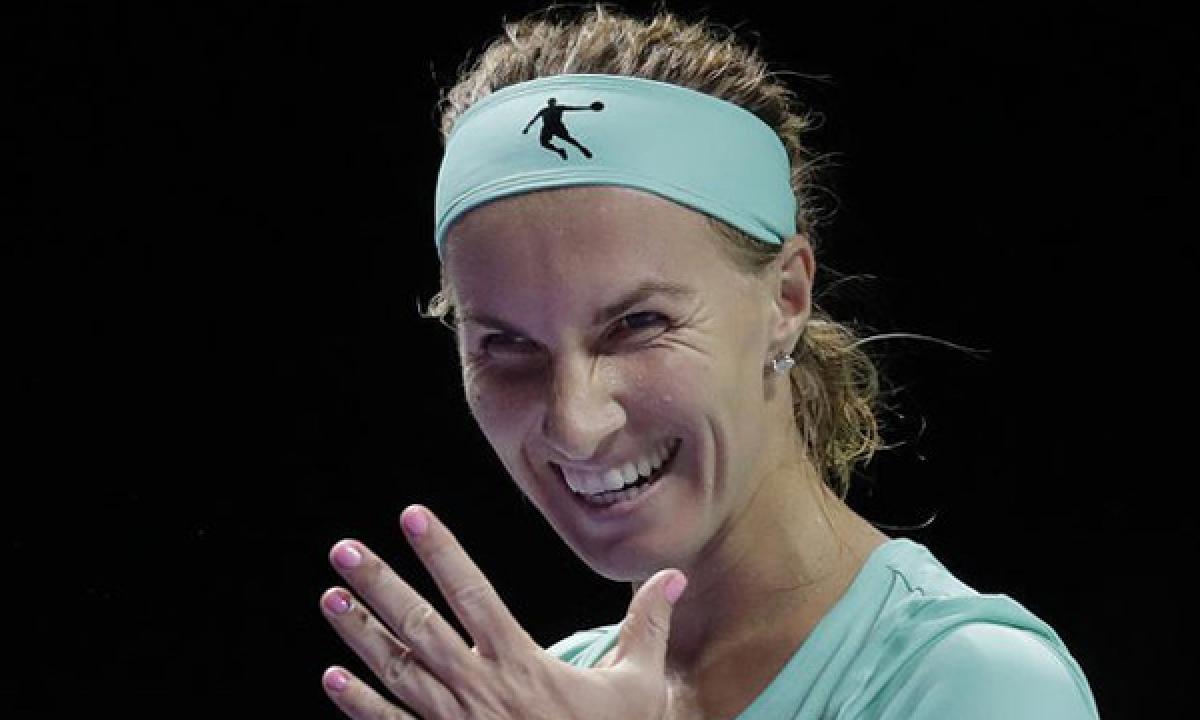 Svetlana Kuznetsova hacked off her own hair with a pair of scissors and burst into tears before saving a match point and beating the defending champion Agnieszka Radwanska 7-5, 1-6, 7-5 at the WTA Finals on Monday. Despite appearing on the verge of exhaustion and close to breaking down, Kuznetsova somehow summoned up the energy to win her opening round-robin match in dramatic fashion, less than 48

Singapore:Svetlana Kuznetsova hacked off her own hair with a pair of scissors and burst into tears before saving a match point and beating the defending champion Agnieszka Radwanska 7-5, 1-6, 7-5 at the WTA Finals on Monday.

Despite appearing on the verge of exhaustion and close to breaking down, Kuznetsova somehow summoned up the energy to win her opening round-robin match in dramatic fashion, less than 48 hours after she qualified for the prestigious end-of-season championship.

Spectators at Singapore's Indoor Stadium looked on in stunned disbelief when the Russian gave herself an impromptu haircut early in the deciding third set, asking the umpire to get her a large of pair scissors before proceeding to chop off the end of her ponytail and tossing the loose strands onto her seat.

"It was bothering me a lot. I was trying to put it behind my headband, but my hair is very thick and heavy," Kuznetsova explained.

"When I was hitting the forehands every time I would hit a good shot...it would hit my eye every time and I had (to) struggle.

Radwanska said she didn't even realise her opponent had cut off her locks during the match.

"I didn't even know that," she told reporters. "Good thing she didn't cut her anything else. I think hair is not very important."

'Have to stay tough'

Later, at the next change of ends, Kuznetsova returned to her seat and began to cry, sobbing into her towel before she regained her composure, wiping the tears from her cheeks and returning to the court to continue a gruelling contest which lasted almost three hours.

Her efforts looked to have been in vain when she dropped her serve to fall 5-4 behind and Radwanska got to match point but the Pole, who blew a 4-1 lead in the opening set, squandered her lone opportunity and Kuznetsova reeled off the last three games to register one of the bravest wins of her career.

"It's what you have inside of you, something comes from the heart," Kuznetsova said. "I always work very much and then being on the court, I knew I have to stay tough. You always have a chance to come back.

"I was trying as much, as hard as I can to fight and just be there."

A two-time grand slam winner, Kuznetsova was appearing in the WTA Finals, restricted to the world's top eight players, for the first time since 2009 but the physical and emotional effort of qualifying appeared to take its toll.

The 31-year-old needed to win the Kremlin Cup in Moscow on Saturday to leapfrog Britain's Johanna Konta for the last spot in the field then had to fly straight to Southeast Asia just to be ready to play her opening match.

The Czech Republic's Karolina Pliskova, appearing in the tournament for the first time after reaching the US Open final last month, also saved a match point in her 6-2, 6-7 (4-7), 7-5 win over French Open champion Garbine Muguruza.

"I'm very happy I made it, this does not happen every day," said Pliskova.

Pliskova trailed 5-2 in the deciding third set after Muguruza had come from a set and a service break down to get on top, but rediscovered her form in the nick of time and won the last five games on the trot to take the victory after two and a half hours.

"Obviously I had my opportunities at the match point but I didn't play the best on that point," Muguruza said. "I'm a little bit disappointed obviously because I had my chance but I will take it hopefully next time."

When you cut your hair in-play because it's getting in the way (and you go & break back) ✂️🇷🇺 #WTAFinals https://t.co/QvzIGBxsy4