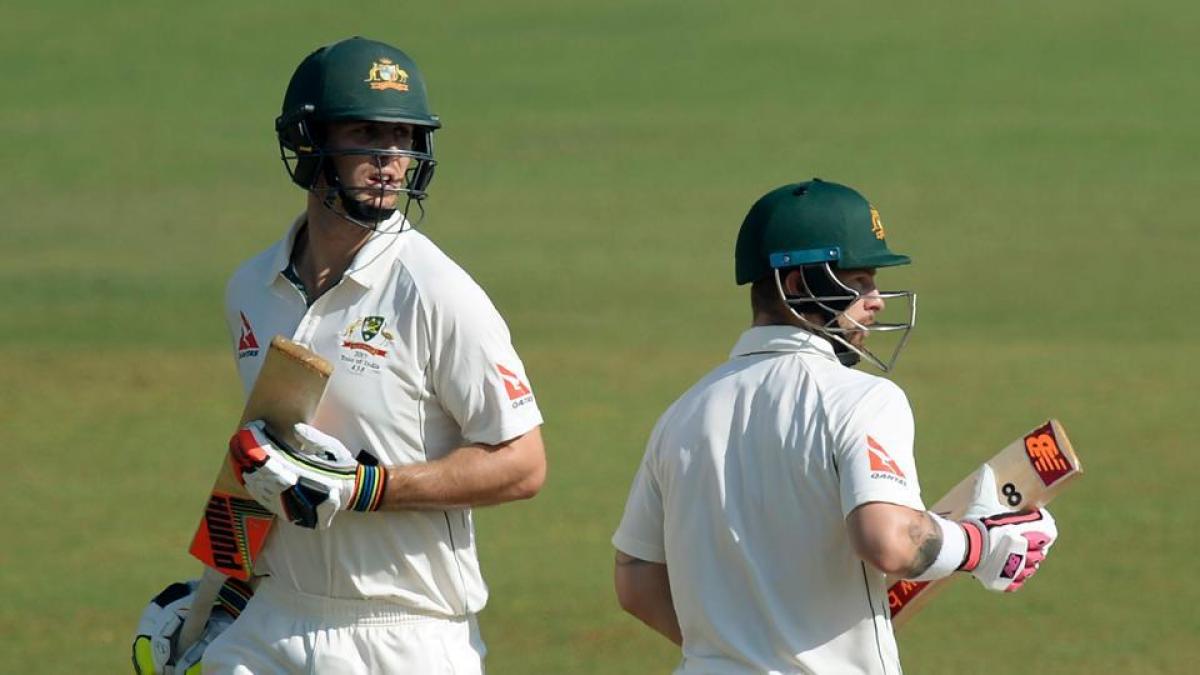 Mitchell Marsh and Matthew Wade completed individual half centuries as Australia added another 100 plus runs against India A reaching a commendable 436 for 6 at lunch, on the second day of the warm-up game.

Mumbai: Mitchell Marsh and Matthew Wade completed individual half centuries as Australia added another 100 plus runs against India A reaching a commendable 436 for 6 at lunch, on the second day of the warm-up game.

Marsh was unbeaten on 64 off 135 balls in company of Glenn Maxwell batting on two. Wade was slightly more attacking than Marsh scoring 64 off 89 balls with 9 boundaries before being dismissed by part-time off-spinner Akhil Herwadkar.

Marsh-Wade duo added 129 runs for the 6th wicket in 33.5 overs, hardly facing trouble from home team bowlers. Wade, the lone batsman to be dismissed in the morning session, was caught behind off Herwadkar for 64.

Earlier, Australia, who had resumed at the overnight score of 327 for five, added 109 runs in 26 overs in the first session of play. The tourists started cautiously as Marsh and Wade preferred to wait for the loose deliveries during the first hour of play. Both Marsh and Wade started to open out in the second hour's play.

The first hour produced only 33 runs in 13 overs with Wade, not out 7 last evening, striking two fours and Marsh just one - an off-drive on the 27th ball he faced this morning. The two raised the 50-run partnership in 94 minutes and then accelerated in the second hour to herald the 100 of the stand in 149 minutes and 184 balls.

Later, Marsh - who was unbeaten with 16 yesterday - started to play a few more shots and struck Navdeep Saini, who had taken two wickets yesterday morning, for two fours in the bowler's seventh over after he had bowled economically in his first six overs. Wade, who had started with a streaky shot for four off Hardik Pandya in the morning, later square cut and then off drove the A team captain handsomely for fours when the bowler over-pitched.

Marsh, whose brother Shaun had scored a century yesterday along with visiting team's captain Steve Smith before both retired to the pavilion, reached his half century after two and a half hours' stay with a pulled tenth four off Ashok Dinda, the misfield by Ankit Bawne helping him in the process, in 103 balls. The toothless India A bowling attack could do hardly anything worthwhile to disturb the sixth-wicket duo's poise.

They were also a bowler short with Krishnappa Gowtham, who suffered a hamstring injury after lunch yesterday and limped off the field, was off the field in the morning session. Left-arm spinner Shahbaz Nadeem came on to bowl after the first hour, but he could hardly get any purchase out of the track to trouble the batsmen and Wade punched him off the back foot square of the wicket for two fours.

Marsh also smacked him straight to the roof of the stadium. Wade smashed Shreyas Iyer, who bowled full tosses, twice in as many balls to the cover boundary, forcing Pandya to bring on Herwadkar who succeeded in breaking the stand by having the left handed Wade caught behind by Rishabh Pant off a top-edged sweep shot. Wicketkeeper Ishan Kishan had gone in during the first break for drinks after handing over his wicket-keeping duties to Pant.