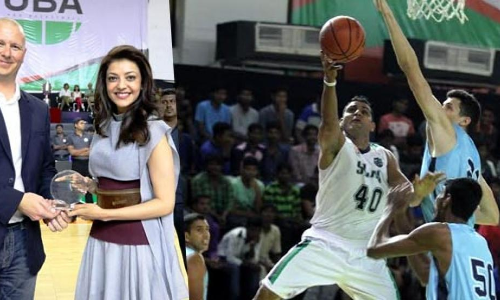 In a back and forth encounter, Hyderabad Sky overcame a balanced attack from Chennai Slam as they raced out for an 83-79 win.

Hyderabad/Chennai: In a back and forth encounter, Hyderabad Sky overcame a balanced attack from Chennai Slam as they raced out for an 83-79 win.

Playing in front of their home crowd, Chennai raced out to a 5-0 lead behind quick conversions from Cammy and Rikin. Hyderabad tied the game at 7 behind Tevin Kelly halfway into the quarter. Telly drew the second foul on Agu but the latter stayed on the court. Joginder halted Chennai’s run with a three and Kelly ended the first quarter with a buzzer beating three as Chennai led Hyderabad 19-17 to end the first quarter.

Chennai opened the second half by rotating the ball for good looks and Hyderabad responded with a couple of buckets from Kelly and Mahesh. Neither team could open up a comfortable lead as the momentum shifted like a pendulum in this tightly fought contest. The teams exchanged leads as Hyderabad pulled away to a slim 67-63 lead over Chennai at the end of the third quarter. Besides Mahesh, Kelly and Joginder, no other player for Hyderabad had more than 5 points through the first three quarters.

Chennai opened the fourth quarter by charging ahead to tie the game at 67 as they raced out for easy baskets in the open court. Hyderabad tied the game at 73 off a putback from Mak Boskailo. Kelly’s three pointer with 5:10 left gave Hyderabad a three point lead and Mahesh streaked inside to extend the lead to five. Cammy answered for Chennai but Manu dropped in two from up close to extend Hyderabad’s lead to 82-75. Ram Kumar hit a long two to bring Chennai within 83-77, but they were unable to mount a comeback as Hyderabad edged away to a 83-79 win.