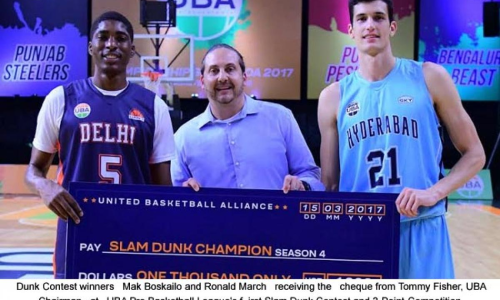 It would have been a clean sweep for Hyderabad Sky during the UBA\'s very first Slam Dunk Contest and 3-Point Competition held on 15th March, 2017.

India: It would have been a clean sweep for Hyderabad Sky during the UBA's very first Slam Dunk Contest and 3-Point Competition held on 15th March, 2017. The show was telecast on Ten Sports Network on 16th March at 6:30 PM. The 3-point shootout was won by Mahesh Padmanabhan of Hyderabad Sky as he outshot Jairam Jat and Agu, both from Chennai Slam, in the final round. He took home $1000 as his prize. His teammate Mak Boskailo tied with Ronald March of Delhi Capitals in the final round of the Slam Dunk Contest as both Mak and Ronald won $1000 each as the prize.Each team wasn’t represented by participants as the selection was based on choosing the best players in the league for the respective events.

The three-point shootout was a closely contested affair with the shooters playing string music on the net. Each player shot from five racks containing five balls each, with each makes counting for one point and the last ball in each rack counting as a money ball for two points. The players had 60 seconds to go through the racks. Here's a look at how close the first round was:

Mahesh, Jairam and Agu moved to the final round where Mahesh took home the honors with his remarkably consistent sharpshooting. Agu finished with

The one-of-a-kind All-star exhibition contest featured a never-before-seen collection of talent on one basketball court. Fifteen best players from the UBA North Division took on the fifteen best from the South Division in an exciting and flashy contest.

Player of the All star Game: Ronald March