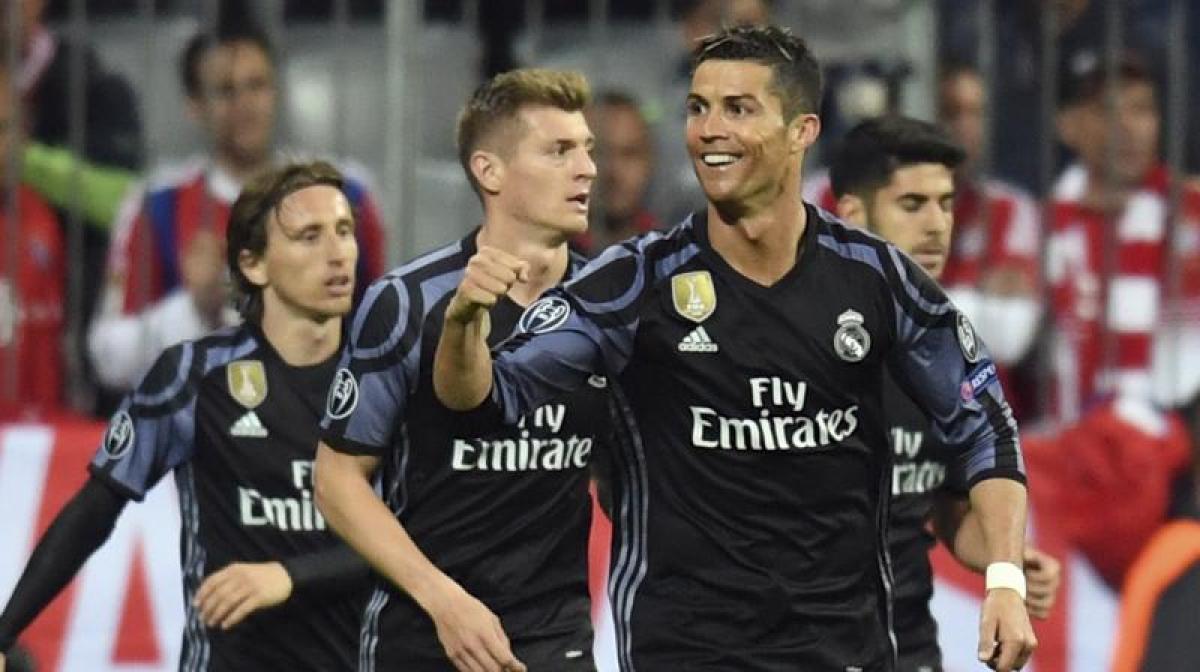 Cristiano Ronaldo scored twice for Real Madrid to beat Bayern Munich 2-1 in the first leg of their Champions League quarterfinal on Wednesday, ending the German side\'s tournament record of 16 straight wins at home.

Cristiano Ronaldo scored twice for Real Madrid to beat Bayern Munich 2-1 in the first leg of their Champions League quarterfinal on Wednesday, ending the German side's tournament record of 16 straight wins at home.

Ronaldo's second-half goals saw him become the first player to score 100 goals in European club competition. The Portuguese star ensured Madrid came from behind - after Arturo Vidal's 25th-minute header for Bayern - to put the defending champions on course to reach the semifinals for a seventh successive year. The second leg takes place in Madrid on Tuesday.

"We are still alive," said Bayern coach Carlo Ancelotti after losing to his former side.

Also Wednesday, Antoine Griezmann converted a first-half penalty for Atletico Madrid to beat Leicester 1-0 at home, and Borussia Dortmund lost 3-2 at home to Monaco in the quarterfinal that was rescheduled from Tuesday, when three explosions targeted the German team's bus.

Bayern was without club top-scorer Robert Lewandowski after he failed to recover from a knock to his right shoulder. But it had not been beaten at home in the competition since April 2014, when it lost 4-0 to Ancelotti's Madrid in the semifinals. Madrid went on to win the title.

Ancelotti's successor at Madrid, Zinedine Zidane, is bidding to become the first coach to lead a side to back-to-back titles in the Champions League era.

"We suffered here but all-in-all it's not easy to play here. They have a great team and great players," Zidane said. "We needed patience to decide the match. I think it's a good result for us. The key was patience."

Bayern forced several corners early on and the sixth finally paid off when Vidal headed home through Keylor Navas' fingers.

Madrid displayed none of the initiative shown by Bayern in the first half. While Arjen Robben, Franck Ribery, David Alaba and Thiago Alcantara were running and forcing the game, the visitors appeared static, waiting for chances to present themselves. They weren't forthcoming.

Bayern should have been 2-0 up at the break, but Vidal sent his penalty well over the bar after Dani Carvajal was adjudged to have handled the ball. The Madrid defender was booked though TV replays showed Ribery's shot had hit his upper body.

"It happens in football. It's not the first time and it won't be the last," Ancelotti said of the missed penalty, calling it one of the "small details" which decided the game.

Ronaldo scored two minutes after the break with one touch to Carvajal's cross.

It ensured Madrid extended its Spanish record of scoring in 53 consecutive games.

Zidane had evidently made good use of the interval as Madrid appeared a different side in the second half. Bayern was dealt a blow with a half-hour to play when Javi Martinez was sent off with two yellow cards within three minutes for fouls on Ronaldo.

"The sending off was the turning point," Bayern captain Philipp Lahm said.

But Madrid had already forced the home side back. Navas had little to do and Manuel Neuer was by far the busier 'keeper.

Neuer denied Karim Benzema, then Ronaldo from point blank, but he couldn't stop the ball from squirming between his legs from Ronaldo's shot after Asensio crossed in the 77th to give Madrid the clear advantage.

It could have been worse for Bayern - Sergio Ramos had a goal ruled out late for offside.