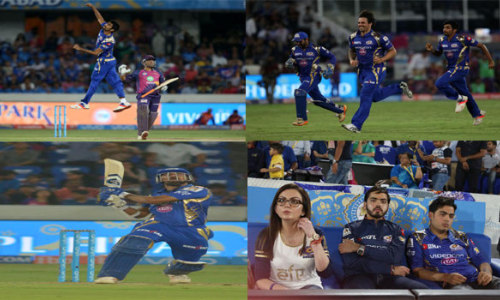 Hyderabad: Fantastic climax! That in a nutshell describes the tenth edition of Vivo Indian Premier League (IPL) that ended on a fabulous note The entire Rajiv Gandhi International Cricket Stadium (RGICS) went into raptures following the sensational win scripted by Mumbai Indians, who seemed to have lost the plot till Mtchell Johnson brought the turnaround in fortunes with a brilliant last over in what was a low-scoring but high-voltage match befitting the slam-bang variety. No match is decided till the last ball is bowled was best demonstrated on this super Sunday.

Mumbai Indians became the first team in IPL history to win the tuitle for a third time when the defeated Rising Pune Supergiant by the proverbial whisker-one run.Pune seemed to be going right for as long as skiper Steve Smith was in the middle. His exit and Johnson's terrif showing sealed the fate of Pune, which will cease to remain in the IPL from the next edition.

Earlier, batting first Jaydev Unadkat, Adam Zampa and Daniel Christian, who each claimed two wickets, helped restrict the two-time champions to 129 for eight wickets.Mumbai began on a disasterous note with the top order failing to stay in the middle.

They were in dire straits at the end of 15 overs with scoreboard reading 79 for the loss of seven wickets. Had it not been for a quick-fire 47 from 38 balls by all-rounder Krunal Pandya, Mumbai would have found it difficult to cross the three-figure mark. Pandya struck three hits to the ropes and two over the fence.