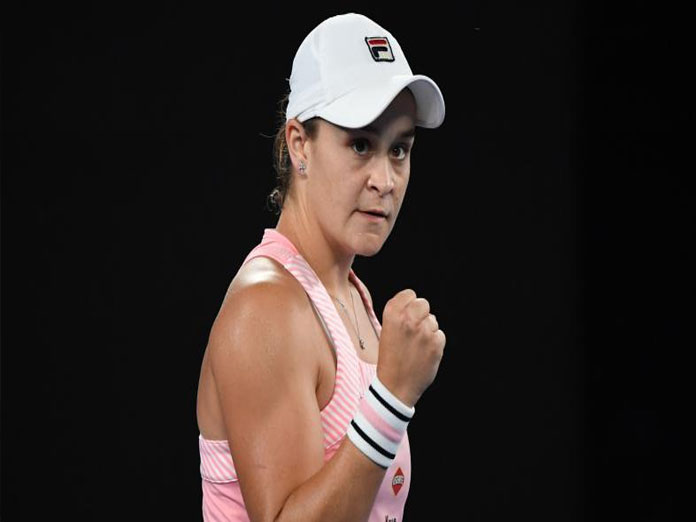 Ashleigh Barty stunned Maria Sharapova to become the first hometown hope in a decade to reach the Australian Open quarterfinals on Sunday, creating a frenzy in a nation desperate for Grand Slam success

Melbourne: Ashleigh Barty stunned Maria Sharapova to become the first hometown hope in a decade to reach the Australian Open quarter-finals on Sunday, creating a frenzy in a nation desperate for Grand Slam success.

Roared on by a fiercely parochial crowd, 15th seed Barty held her nerve in the face of a late fightback from the Russian five-time Grand Slam champion for a 4-6, 6-1, 6-4 win.

Australia's Prime Minister Scott Morrison was in the stands cheering for Barty, along with tennis legend Rod Laver in the centre court arena that bears his name.

The venue erupted when 22-year-old Barty finally sealed match point with an ace after Sharapova set Australian hearts racing with a surge towards the end of the third set.

"The crowd were unbelievable. I've never quite played in Rod Laver when it's been that full," said Barty, joking "that was a little bit close, wasn't it?" after allowing Sharapova back into the match.

The pressure on Barty was immense and will only intensify ahead of Tuesday's last-eight clash with Czech Petra Kvitova in a tie involving two of the sport's form players.

Australian sporting history is littered with legendary tennis players who own multiple Grand Slams, including Margaret Court with a record 24, Roy Emerson with 12 and Laver with 11.

But the country's last female Slam champion was Samantha Stosur, who claimed the US Open in 2011, and the last major won by a male was Lleyton Hewitt's Wimbledon victory in 2002.

No Australian woman has won at their home Slam since Christine O'Neil in 1978 and no man since Mark Edmondson in 1976.

Jelena Dokic was the last Australian to reach the quarter-final in 2009 and players such as Stosur have spoken publicly about how huge expectations have inhibited them at their home Grand Slam.

Locals are so hungry for success that foreign players who have looked like succeeding Down Under found themselves adopted at Melbourne Park and referred to as "Aussie" Kim Clijsters and "Aussie" Ana Ivanovic.

Barty is familiar with Australia's craving. She took a break from tennis in late 2014 to pursue experiences away from the tour, including playing professional cricket.

"I needed to take that time away. I feel like I came back a better person on and off the court, a better tennis player," she said.

Barty said she had talked with her team and felt ready to cope with the pressure of a deep run at Melbourne Park.

"One of the goals we set out that we wanted to go deep into slams and I feel like that was the next step for me," she said. "It's amazing that it's happening in Australia.

Barty showed her ability to maintain a cool head against Sharapova.

After losing a tight first set, she went on a nine-game winning streak to take the second before holding off the Russian in the third.

Barty praised the fighting qualities of Sharapova, who was seeded 30th this year as she tries to rejoin the game's elite after returning from a 15-month doping ban in 2017.

"She is an absolute champion," Barty said of the 31-year-old, who dumped defending champion Caroline Wozniacki from the tournament in the previous round.

"She was never going to go away. I knew I had to keep chipping away."

Barty's next opponent Kvitova is on a nine-match winning streak including defeating the Australian in a tight three-setter to decide the final of the Sydney International warm-up.

However, Barty has won seven from eight in 2019 and will be keen for revenge against Kvitova.