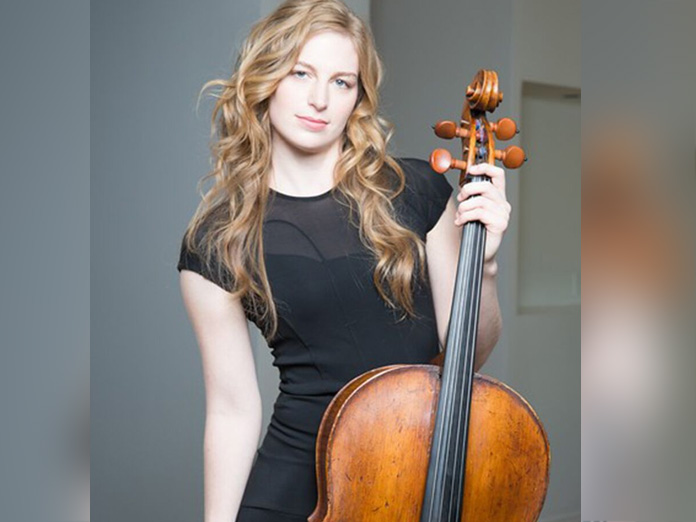 Cellist Sarah Rommel recently mesmerised the audience at SOTA Resonance Festival presented by British Airways at the Trident The fest had two unique programmes, The Berlin Concert and The Vienna Concert Sarah began cello at age 12 and is a graduate of the Curtis Institute of Music, where she studied with Peter Wiley She recently graduated from the USC Thornton School of Music where she stu

Cellist Sarah Rommel recently mesmerised the audience at SOTA Resonance Festival presented by British Airways at the Trident. The fest had two unique programmes, ‘The Berlin Concert’ and ‘The Vienna Concert’. Sarah began cello at age 12 and is a graduate of the Curtis Institute of Music, where she studied with Peter Wiley. She recently graduated from the USC Thornton School of Music where she studied with Ralph Kirshbaum.

Sarah is a top-prize winner of the 2014 George Enescu International Cello Competition in Romania. She is the recipient of several grants and awards including a Williamson Foundation Grant, Frank Huntington Beebe Fund Grant, and Jack Kent Cooke Young Artist Award. Sarah has actively participated in the Piatigorsky International Cello Festival, Academie Musicale de Villecroze, and IMS Prussia Cove and has worked closely with such professors as David Geringas, Gary Hoffman, and Frans Helmerson.

What was your aim to achieve by this collaboration with ‘State Of The Art’ (SOTA)?
I was looking forward to meeting new musicians and make music with them. I was also looking forward to seeing my friends, Timothy and Shruti! The most important thing liked to achieve, however, was to spark curiosity and interest of classical music in Hyderabad, to make this music accessible and fun, and to establish a relationship with the community that resonates in an impactful way.

What inspired you to associate with SOTA?
The biggest inspiration is Timothy, of course! I met him in 2015 at a music festival in Vermont. SOTA, at the time, was just an idea beginning to develop, but his passion and commitment to making it happen were contagious and I immediately expressed an interest in taking part. To be associated with a music festival from its inception is a rare opportunity and I wanted to be a part of the journey and development of bringing Western classical music to India through SOTA.

You must be travelling across the globe to perform for your concerts. Could you tell us what motivates you?
Learning and continuous development motivate me. Making music is a life-long pursuit, and the opportunities that arise to make music with many different collaborators means constant changing and adapting. The same can be said when you travel to a new country or experience a new culture! So, music making and travelling often go hand-in-hand.

What is your opinion on Indian music culture? Do you have a favourite artist/band that stands out?
I’m embarrassed to admit that I don’t know much about Indian music culture! And, I wish to know more. I think cross-culture collaborations are successful when both sides are able to offer and share what they’re proud of, so I want to encourage our audience members, and anyone impacted by SOTA, to share their favourite Indian artists and musicians with me.

Which destination is at the top of your bucket list to visit it next?
My partner and I love to travel, so both of our bucket lists are quite long. We have, however, decided on where we’d like to travel this year: Slovenia and Central Asia. Both are off the beaten path destinations and culturally very interesting, not to mention very beautiful!

What are your top five destinations of all time?
Aside from India, of course, I’d love to go to the Faroe Islands, Morocco, Kenya, and see all of the National Parks in the United States.