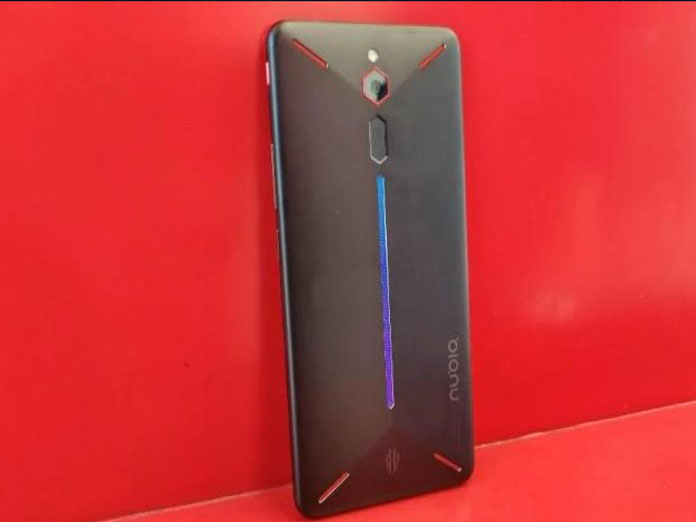 With great build quality and fast performance in running games like PUBG Mobile, the Red Magic shows Nubias prowess But with older specifications and an unpolished software, it is hard to recommend this otherwise good smartphone

With great build quality and fast performance in running games like PUBG Mobile, the Red Magic shows Nubia's prowess. But with older specifications and an unpolished software, it is hard to recommend this otherwise good smartphone.

In the year 2018, after the online multiplayer games such as PUBG MOBILE and Fortnite proved to be extremely successful, the mobile industry took mobile gamers seriously. Asus came up with ROG Phone, a smartphone dedicated for mobile gaming with a tweaked Snapdragon 845 chipset. Later many brands from China came up with dedicated gaming smartphones. Xiaomi also came up with the BlackShark and Poco brands for catering to two distinct groups of consumers. Soon after Nubia also launched the Red Magic and followed it up later in 2018 with the Red Magic Mars.

Nubia wanted a noticeable re-entry In India. So, instead of coming up with a sub-Rs 20,000 smartphone, the company preferred the gaming sector and launched the Red Magic. Priced at Rs 29,999 with the variation that has 8GB RAM and 128GB storage, it undercuts the fan-favourite OnePlus 6T by a huge margin. However, when you consider its specifications, especially the older Snapdragon 835 chipset, it does struggle to appeal when you consider that Xiaomi sells the Poco F1 for at less.

Now the question is, does the Red Magic make sense at present when the world is gearing up for the ultra-powerful next-generation Snapdragon 855-powered smartphones? It's surely fast and runs the games well. But still, the answer will be no. And that's a disappointment because we do find that the Red Magic pretty good in some areas and would like to recommend it. So, read on to find out.

While all the smartphone manufacturers are using the fragile glass as the primary material for building the bulk of a phone, the Nubia Red Magic is heading in the opposite direction. The Red Magic is a metal unibody phone, and this means the phone can be used without snapping bulky and ugly case on it. Amazing! Metal is also more durable than any glass smartphones since it hides scratches and wear-and-tear better.

When compared to other metal-body phones, the Red Magic opted for an unconventional design, a design that no other manufacturer would have the courage in today’s highly competitive market. The drawback of this is the hint of impracticality. You can’t use the Red Magic while it is placed flat on a table without wobbling it every time you tap on it.

Keeping this aside from the phone's unique pyramid-like shape with a central ridge that features a massive RGB LED light. It surely makes the gamer glee in you.

Not only this, Nubia opted for four red-coloured accents for the heat vents and the speaker, which is undeniably cool. Even the camera is housed in a trapezoidal module surrounded by red accents. The fingerprint sensor matches the rest of the theme. The subtle Red Magic branding and the Nubia logo towards the bottom complete this extremely excitable rear panel.

Miserably, after all that excitement that rear of the phone delivered, the front part will disappoint you. The front is dominated by a large 6-inch display with an aspect ratio of 18:9. This translates to bigger bezels on the top and bottom. There’s no hint of a gaming phone here -- no red accents, no graphics, no RGB lighting – there is nothing!

The side flaunts the usual array of buttons and a OnePlus-style slider. However, the slider is only used in enabling or disabling of the GameBoost mode. In precise, the design of the Red Magic is quite exciting. The front could have been much better, or else, the phone looks cool and different.

One of the most important areas that a gaming smartphone needs to impress with is its display. After all, a display is the only way powerful specifications can show their efforts. Since the Red Magic was launched in early 2018, it has an 18:9 display with a thick forehead and chin. The design is better than a botched implementation. But the impressions end with this.

A 6-inch IPS LCD display with full HD+ picture resolution isn’t bad by any means. However, the panel’s colour rendition is just average. The LCD panel produces dull colours with average contrasts. Sunlight legibility is decent while viewing angles are reasonably wide. There are better LCD displays at this price point or even in phones that are priced way cheaper than this one. Nubia was unable to impress here.

When the Red Magic was launched, we were wondering whether a gaming smartphone would keep up with the modern slew of Snapdragon 845-powered smartphones with its old Snapdragon 835. After reviewing the phone, we were able to load the Red Magic with most of the high-resolution graphics-intensive games such as PUBG MOBILE, Fortnite, Asphalt 9, Freefire, F1 Mobile Racing and Need for Speed: No Limits. And sure enough, as expected, the Red Magic deals with them all magically.

The Snapdragon 835, despite being the past in the eyes of geeks and gamers, still holds itself well in managing whatever the latest gaming titles can throw at it. PUBG Mobile came at a time when the Snapdragon 835 was in its heyday, hence it ran on the highest graphics settings. Asphalt 9, is a slightly modern title, compromised the frame rates while Fortnite chose to stay comfortable in medium settings. Gameplay was smooth most of the time, thankful to the overclocked 2.45GHz Snapdragon 835 processor and 8GB RAM.

There is one more factor that helps with the smooth performance, stock Android interface. Yes, instead of loading their custom Red Magic interface, Nubia knew enthusiasts in India value stock Android over everything else. Therefore, they took the AOSP launcher and added their performance modifications to it. With probably lesser load from the operating system, the phone could dedicate entire resources to what’s on priority. Nubia also made several under-the-hood optimisations to make sure the software supports the hardware when consistent peak performance is needed.

The GameBoost mode claims to kill background processes and boost performance. However, the Gameboost slider also puts the phone in Do Not Disturb mode. This disables all notifications, which improves concentration. The Gameboost mode also activates the RGB light show on the rear. There are four lighting patterns available to choose from. While playing, the light show keeps going on. This gives a very gaming-laptop-like vibe.

The audio performance is rationally good. The single loudspeaker at the back is very loud and manages to cover a wider range of frequencies, with distortion happening only on the loudest volume levels. Audio through the 3.5mm headphone jack was impressive.

Sadly, the same cannot be said when I wasn’t gaming. Optimising a stock Android interface for gaming is good, but tuning it for basic smartphone usage is also necessary. It is 2019 and the Red Magic is running on Android Oreo 8.1. What irks, even more, is that the security patch if from August 2018. Therefore, you are left helpless in terms of security.

The operating system also lacks proper optimisation and has many bugs. One needs to resort to rebooting the phone at least three times a day. The sound profile would weirdly go into DND mode, even after selecting the Ring mode. The interface is also unpolished, especially with an unbalanced grid on the home screen.

The biggest issue with the software part is that it’s very boring for a gaming smartphone. It may stock Android boosts performance, but would have preferred a customised interface with exciting wallpapers, themes and sounds -- something similar to OnePlus Oxygen OS. The dull interface doesn’t differentiate it from any other budget smartphone with a stock Android Oreo interface. Maybe an Android Pie update could sort things in the future, but don’t see a promised update in the foreseeable future considering the security patch is still stuck 6 months ago.

The Red Magic flaunts a 24-megapixel rear camera with an F1.7 lens and phase-detect autofocus. Unlike the trend of putting dual cameras, there’s only a single sensor at work for the rear. With slight AI enhancements at work, the camera shoots some decent looking photos. In the daylight, the Red Magic’s camera is up there with other phones in its price segment. Images contain bright and vivid colours while contrasts are impressive in daylight scenarios.

In low light ambience, the camera starts losing details because of aggressive noise suppression. Exposure management also falls drastically. Pictures clicked at night barely catch anything. Video recording is capped to 2160p@30fps. The quality is rather average and with lack of any stabilisation, it leaves a lot to wish.
The 8-megapixel front camera is average at its best. The colours are ok but the images aren’t sharp. The selfie camera is good enough for video calls -- not useful for anything more than that.

Nubia Red Magic battery: You will exhaust before it does

A gaming smartphone needs a big battery to keep up with the demands of power users. With a 3800mAh battery, the Red Magic can easily last for an entire day, considering close to two hours of gaming, frequent music streaming, texting, video streaming and occasional selfie sessions.

On the days when not used for gaming, the Red Magic stood at 50 per cent of stamina before one retire for the day. There’s an equivalent of Quick Charge 3 fast charging mode available (Nubia doesn’t mention Qualcomm’s branding anywhere) that tops up the battery from 50 per cent to 100 per cent within an hour. When the battery falls under 10 per cent, it can reach 60 per cent under 40 minutes.

Should one go for Nubia Red Magic?

If your inner 9-year-old prefers to flaunt a flashy device with RGB lighting and exciting design for no reason other than putting a smile on your face, the Red Magic is the best for you.

It’s the most exciting smartphone seen in recent times. If the design isn’t your sole reason to spend money on this one, the raw performance is what deserves your money. Even with an older Snapdragon 835 chipset, the gaming optimisations make sure you will be good to go for at least another two years before you are in dire need of an upgrade.

The Red Magic has its own set of flaws that can’t be overlooked. The display is average, the camera performance is sub-par and the gaming-focussed design is impractical to live with on a daily basis. The biggest issue though is the unpolished, unsecured and bug-riddled software that makes this otherwise great phone not usable at times.

The elephant in the room is also the price of Rs 29,999. At this price, you can also get Asus ZenFone 5Z with a Snapdragon 845, 8GB RAM and 256GB storage. Xiaomi offers the Poco F1 with the same hardware like the Asus but with added liquid cooling, a bigger battery and more practical kevlar body. We have seen these phones perform at the very threshold of what’s possible in the world of mobile gaming on Android.

Therefore, it becomes difficult to recommend the Nubia Red Magic over the others. Maybe the Red Magic Mars with a Snapdragon 845 and capacitive touch triggers should have been the phone Nubia should have brought to India at this stage. Nonetheless, It’s a good start for Nubia and expects them to compete with the established ones more assertively.