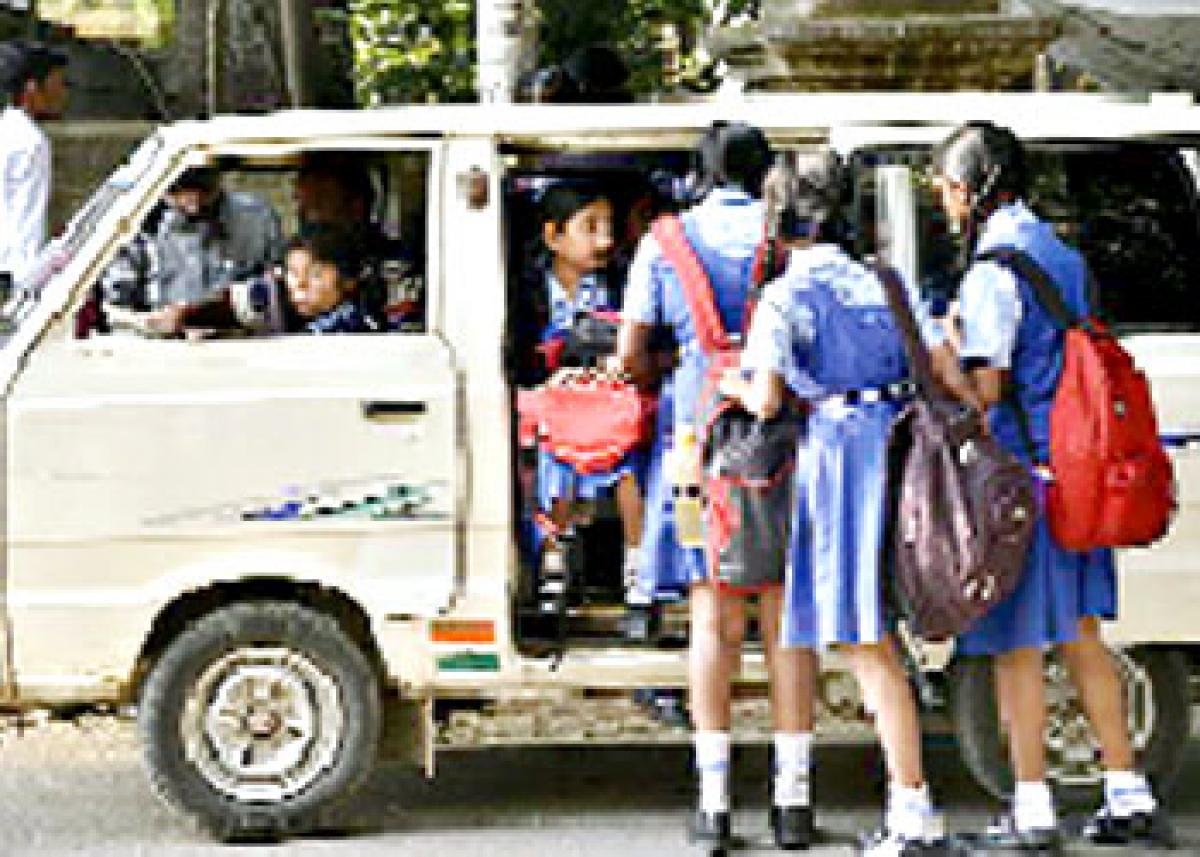 With school managements not providing transport facility to all the areas, parents are opting for private Omni vans to send their kids to schools putting their lives in danger

** With school managements not providing transport facility to all the areas, parents are opting for private Omni vans to send their kids to schools putting their lives in danger
** Most of these vehicles do not have first aid and are running on domestic LPG gas in violation of rules

Hyderabad: Due to alleged connivance of some RTA authorities, who are turning a blind eye to the violations by private Omni van owners, lives of toddlers ferried by unfit vehicles are put in grave danger. Parents are forced to go to the private operators as the school managements do not provide proper conveyance.

There has been spurt in the number of school-going students opting for these Omni vans in the recent times because of the laxity of school managements who are not providing transport buses for the school children. Security of the children is at a great risk because of various reasons like more number of children being carried than the permissible capacity, non-maintenance of first aid kits and drivers without driving licences operating these vans. Most of these vehicles are run on domestic LPG gas and provide services at cheaper rate. They do not pay the quarterly tax amount and therefore do not apply for the school transport permit resulting in the violation of rules.

It may be mentioned here that a Maruti van used to ferry school children caught fire due to leakage in the gas cylinder fixed in the van at Moghulpura during last October. Fortunately, there were no casualties since the children had been already dropped at the school when the mishap happened.

As per the rule, the educational institution buses should be registered with the RTA along with details of the buses and also the driver with proper driving licence. However, the vans, which are having capacity less than 25 seats, do not fall under the category of ‘educational institution’ vehicle.

As per the rules, the school buses must display the name of the institution, its address and telephone number and must identify itself as ‘school/college bus’ prominently in the prescribed format. The rule also mentions that the vehicle should have a first aid box with necessary medicines apart from fire extinguisher. The windows should have three iron bars to prevent students from slipping out. The bus should also provide bag racks under the seats. Every bus should have at least one attendant who along with the driver must wear a uniform prescribed by the transport authorities.

As far as the registered educational institution buses are concerned, the RTA authorities developed an app through which the parents can know the details such as which driver is driving the bus on a particular day. The authorities take up checks frequently and take action for different violations like not having valid driving licence, not maintaining fire safety equipments and others.

Under the Education Institutions category, there are about 1,600 buses in Hyderabad and close to 6,000 buses in Rangareddy district.

The situation of the parents has been tricky as they know their wards are put to risk but with no proper conveyance by the school authorities is forcing them to go for the alternative ways.

“The school authorities said that there are not many children from my area and asked me to make alternative arrangement,” says parent of a class VII student who wished not to be named.

Joint Transport Commissioner (Vigilance) B Venkateshwarlu said that on an average RTA officials seize about 15 vehicles in a day that do not follow rules. The Omni vans culture has picked in the recent times due to several reasons. Our officials had taken up study in Maharashtra where Omni vans were permitted. When asked whether the Omni vans would be taken under the purview of educational institution category, the JTC said that there is no proposal with the department. He said that the department would consider if a representation comes.