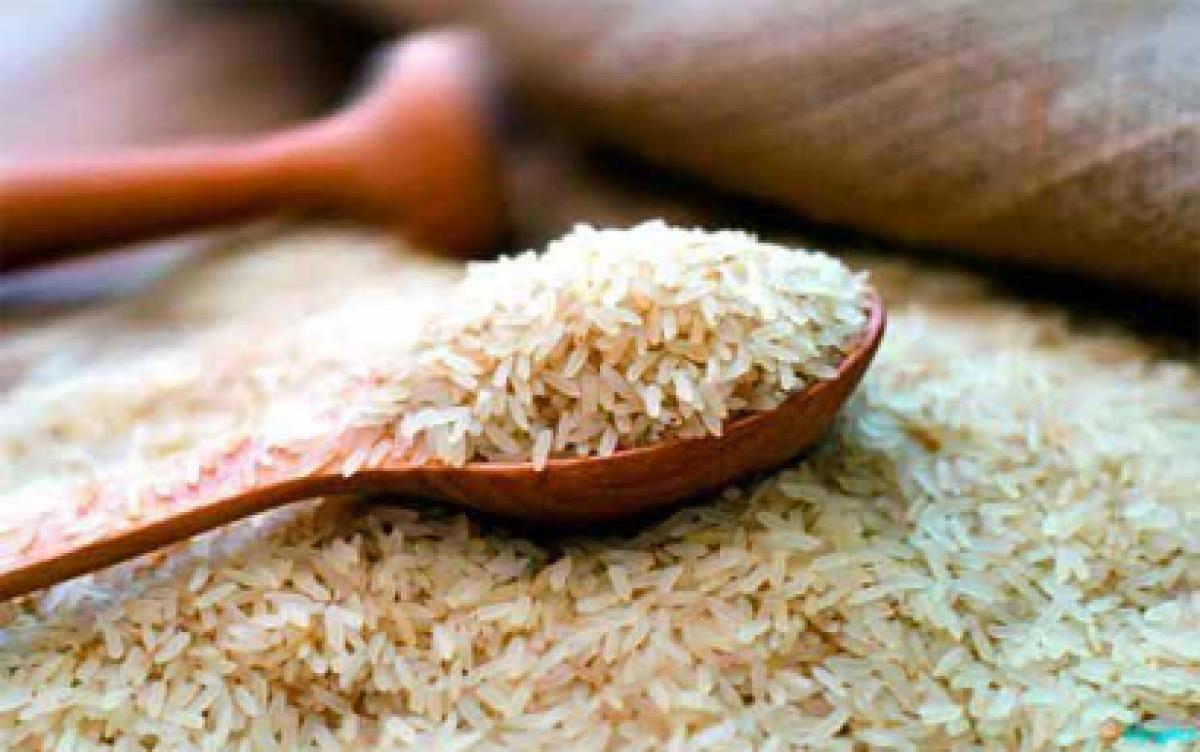 Consequent to bifurcation and formation of Telangana State, the beneficiaries were identified for issue of Food Security Cards covering all priority groups with an objective to provide subsidized food grains and other Essential Commodities to the eligible households under implementation of the National Food Security Act, 2013.

Consequent to bifurcation and formation of Telangana State, the beneficiaries were identified for issue of Food Security Cards covering all priority groups with an objective to provide subsidized food grains and other Essential Commodities to the eligible households under implementation of the National Food Security Act, 2013.

The income limit for the eligibility of the BPL families (priority households) has been increased for rural areas to Rs. 1.50 lakhs and to Rs.2 lakhs in urban areas. The ceiling on holding of land has also been increased to 3.5 acres of wet land and 7.5 acres of dry land. However it was specified that income on land will be taken as criteria for issue of BPL cards.

The latest statement showing the number of beneficiaries of Food Security Cards is enclosed.All the FSC beneficiaries are supplied with 6 kg. rice per person without any ceiling on number of members in the family and 35 kgs. per AAY (AFSC) card per month at Re.1 per kg. from 1st January, 2015 onwards.

Aadhaar Seeding:
The entire data of all the persons identified for Food Security Cards has been digitized, seeded with Aadhaar numbers, Aadhaar authenticated and maintained in Public Domain.

The seeding of Aadhaar in the ration card data through e-PDS is helping the Department to remove duplicate / bogus units in the name of non-existing/dead/ migrated persons. The National Informatics Centre has also provided security measures to keep the information strictly and confidentially.

The following bogus Units were eliminated from May to September 2015 with the help of Aadhaar data as indicated below:

All the above units have been deactivated in the database which has resulted in a savings of about Rs.31.27 crores per month.

FP Shop Automation with ePoS devices:
The ePoS devices work with Aadhaar based biometry wherein the biometrics (finger prints of the members of the ration card) will be captured at the time of drawal of ration and once they are matched, ration will be delivered to them. The devices will not accept the finger prints of person attempts to draw ration other than the members of the family and reject the delivery of stocks.

ePoS implementation will not only provide ration to the genuine beneficiaries but also results in saving of essential commodities both in quantity and resultant subsidy to the Government. With e-POS, a minimum average saving of about 21% of rice and other essential commodities and the resultant subsidy of both the Govt. of India and the State Government could be achieved.

The State has been implementing the NFSA, 2013 from 1st October, 2015 onwards and under its implementation, the FP Shop Automation is also a condition required to be fulfilled. The Government has decided to implement FP Shop automation with ePoS devices initially in 1545 FP Shops in GHMC area and to roll out in the entire State by March, 2015. Accordingly, the selection of System Integrator Agency i.e. M/s Linkwell Telesystems Pvt. Ltd. has been completed and work order has also been issued for implementing ePoS initially in 1545 FP Shops in GHMC area. Accordingly, training was given to all the 1545 FP Shop dealers, devices handed over to them. In the 18 FP Shops, ePoS devices of the System Integrator have been installed and on stabilizing, it is planned for rolling out in all the remaining FP Shops in the State.

End-to-end Computerisation of Targeted Public Distribution System:
Under End to End Computerisation of Targeted Public Distribution System (TPDS), NIC has developed “ePDS” software under End to End Computerisation of TPDS which is an online software application that helps the Civil Supplies Department in allocating Essential Commodities to FP Shops, digitize the ration card data, seeding the ration card database with Aadhaar so as to eliminate bogus / dead/ migrated/ duplicate cards/units or ineligible persons and also to carry out mutations received from the beneficiaries through Mee Seva.

In Telangana State all the 10 districts are under the cover of ePDS which has become the main source of information pertaining to Fair Price Shops, particulars of the Card holders, Aadhaar particulars and useful in the generation of Dynamic Key Register, online allocation of essential commodities to the districts by the Commissioner of Civil Supplies, from the districts to the Mandals / Circles by the DSOs and from there to the FP Shops by the Tahsildars/ASOs. The remittances towards the cost of commodities by FP Shop dealers is being implemented through Mee Seva / eSeva centres, generation of online Release Orders for release of stocks to the FP Shop dealers has also being implemented under end to end computerisation.

Under Supply Chain Management, the movement of essential commodities from FCI godowns / buffer godowns to MLS Points and from MLS Points to the doorstep of FP Shops is being done. The closing balances of Essential Commodities are uploaded in the ePDS website which is also being closely monitored and basing on the CBs, the online allocation is being made.

The requests of cardholders through Mee seva for different mutation services are also now made available. This is helping the changes getting reflected in the database immediately after approval by the concerned ASO / Tahsildar.

ePDS also has a provision for making available the reports in public domain such as Master Key Register, Dynamic Key Register, Card position details, FP Shop-wise Card position, Allotment Particulars, Kerosene Oil DKR etc., which will bring more transparency. With ePDS website all the activities of the Department are decentralized and the public have been given the provision to search their ration card application status / FSCs. ePDS is also enabling the Department to ensure that the field level functionaries are made more accountable to bring more transparency in Public Distribution System.

Grievance Redressal Mechanism:
Toll Free No. 1967 as required under the NFSA, 2013 and another Toll Free No. 1800 425 00333 under Consumer Affairs are operational for receiving complaints / enquiries /queries from the public / cardholders and which are being forwarded to the concerned officers for redressal.

In order to ensure adequate food security to the BPL families of the State, rice is supplied at 6 Kgs of rice per person per month at subsidized rate of Rs. 1/- per Kg w.e.f. 1st January, 2015, without any limit on the numbers of members in the family. The AAY card holders will also get 35 Kgs of rice per month per family at Rs. 1/- per Kg. National Food Security Act, 2013 is implemented in the State w.e.f. 01.10.2015. The State Government is supplying rice at 6 kgs per unit for 28637441 persons at Re.1/- per kg as against the Government of India coverage of 191.696 lakh persons at 5kg per unit under NFSA, 2013.A quantity of 1.80 lakh MTs of rice per month is being released.

Redgram Dal:
Government makes Redgram Dal available for distribution to BPL families at subsidized rates through Civil Supplies Corporation under PDS. Redgram Dal is being supplied @ 1kg per family to all BPL cardholders at Rs. 50/- per kg. A quantity of 50,357 MTs of Redgram Dal has been distributed in Telangana State through PDS, since its inception i.e. June’2014.

The scheme is being run by the State Government at a subsidy i.e. reimbursement of differential amount between the Economic Cost (i.e. purchase cost with all expenditures incurred by the Corporation) and the End Consumer price as fixed by the Govt. i.e. Rs. 50/- per kg. In the present quarter (i.e. Oct’2015-Dec’2015), the subsidy per kg packet is Rs. 108.50/- . the monthly off-take of Dal in the present quarter is about 5500 MTs.

Free-Flow Iodized Salt:
Government makes Free-Flow Iodized Salt available for distribution to BPL families at subsidized rates through Civil Supplies Corporation under Public Distribution System. Iodized Salt is being supplied @ 1kg per family to all BPL cardholders at Rs. 5/- per kg. A quantity of 21,039 MTs of Iodized Salt has been distributes in Telangana State through PDS, since its inception i.e. June’2014.
The scheme is being run by the State Government at a subsidy i.e. reimbursement of differential amount between the Economic cost (i.e purchase Cost with all expenditures incurred by the Corporation) and the End Consumer price as fixed by the Govt. i.e. Rs. 5/- per kg. In the present quarter (i.e. Oct’15-Dec’15), the subsidy per kg packet is Rs. 0.20 ps. The monthly off-take of Iodized Salt in the present quarter is about 1200 MTs.

Kerosene:
The Government of India is allotting 14544 KLs of Kerosene Oil is being allocated for distribution to all the BPL cardholders and the same is being re allocating to the districts to both LPG and Non-LPG connection holders as per the following scales w.e.f. December’ 2011.

Deepam Scheme:
Objective :
With a view to reduce dependence on forest for firewood, improve their health status, remove drudgery due to conventional cooking and improve the general environment of the State by paying the cost of LPG cylinder and regulator as per the rate of the Oil Companies in force from time to time the Govt. issued orders for sanctioning of Deepam connections to Women belonging to the poor sections of the society duly paying the security deposit to Oil Companies.

The Government have sanctioned an amount of Rs.100.00 Crore for the year 2014 -15 for sanction of LPG connections under Deepam scheme for distribution to the women belonging to poor section. Thus, 6.25 lakh connections have been released with the amount. Details of the district-wise allotment is as follows:

The Government have also sanctioned an amount of Rs.50.00 Crores for the year 2015-16; for allotment of 3,12,500 LPG connections under Deepam Scheme for distribution to the women belonging to poor section. Necessary allocation and selection of beneficiaries are under process.

The Minimum Support Price for Paddy, Maize and Pulses during KMS 2015-16 is as follows:

Bonus of Rs.200 per quintal is payable over thee above the MSP.

It is informed by Government of India that with a view to ensure payment of remunerative prices to farmers at MSP or above and to improve outreach of procurement system to the farm gate for their better coverage, it was decided that the State Governments should not impose any levy on millers from 1st October, 2015.