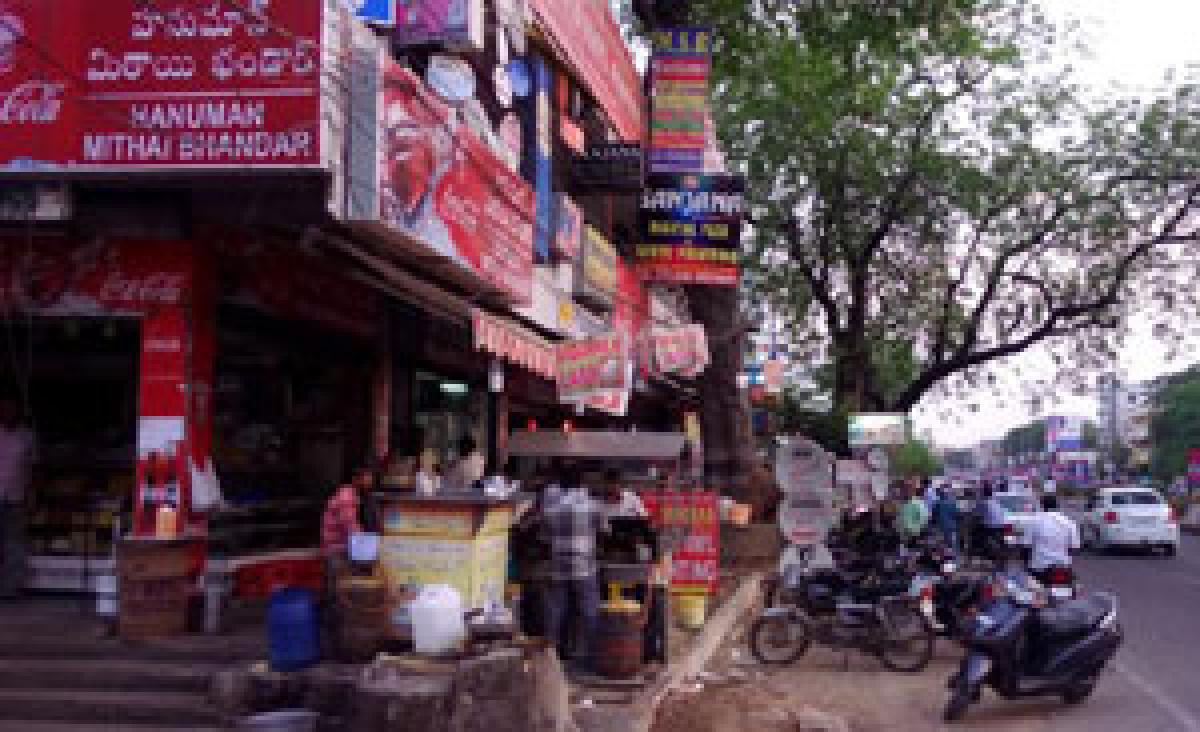 Traders are using footpaths in the name of their small brethren. They are thriving as the Town Planning department officials are allegedly turning a blind eye towards the issue after receiving ‘mamools’.

Warangal: Pedestrians are finding it difficult to walk on footpaths on the main roads spread over 18 km in Warangal, Hanamkonda and Kazipet following their encroachment by traders. Consequently, there is a ‘question mark’ over the safety of people using the path meant for walkers.
Traders are using footpaths in the name of their small brethren. They are thriving as the Town Planning department officials are allegedly turning a blind eye towards the issue after receiving ‘mamools’. There are also allegations that the staff openly demands money from traders for looking the other way. Right from a tea stall owner to a big trader are allegedly paying Rs 2,000 each as bribe to the Town Planning staff. As a result, there is hardly any space for the road users to walk in place abutting roads, at a time when there is a steep growth in vehicular traffic throughout the day.
With Warangal becoming the second largest city in Telangana, 20- 40 vehicles pass the main thoroughfares every minute, most of the time scaring the passers-by. Residents are worried that if they walk on roads they may get hurt in accidents.
A representative of the Forum for Better Warangal, Pulluri Sudhakar, while speaking to The Hans India, expressed anguish that none is bothered to check encroachment of footpaths by traders. “There are no footpaths left to use by the town residents,” he pointed out. Sudhakar threatened to launch a legal battle to free footpaths from the clutches of encroachers.
According to him, footpaths in Hanamkonda have been occupied by huge shopping malls, which use them for parking. Residents of the three cities want the ruling party in Greater Warangal to respond to the problem of encroachment.
City Planner A K Reddy admitted that footpaths to the extent of 18 km in the greater limits have been occupied. He claimed that notices have been issued to traders for encroachment. Reddy stated that the hawker’s zones were to be built for their benefit. The department would take back control of footpaths and make them fit to use by pedestrians, he asserted.