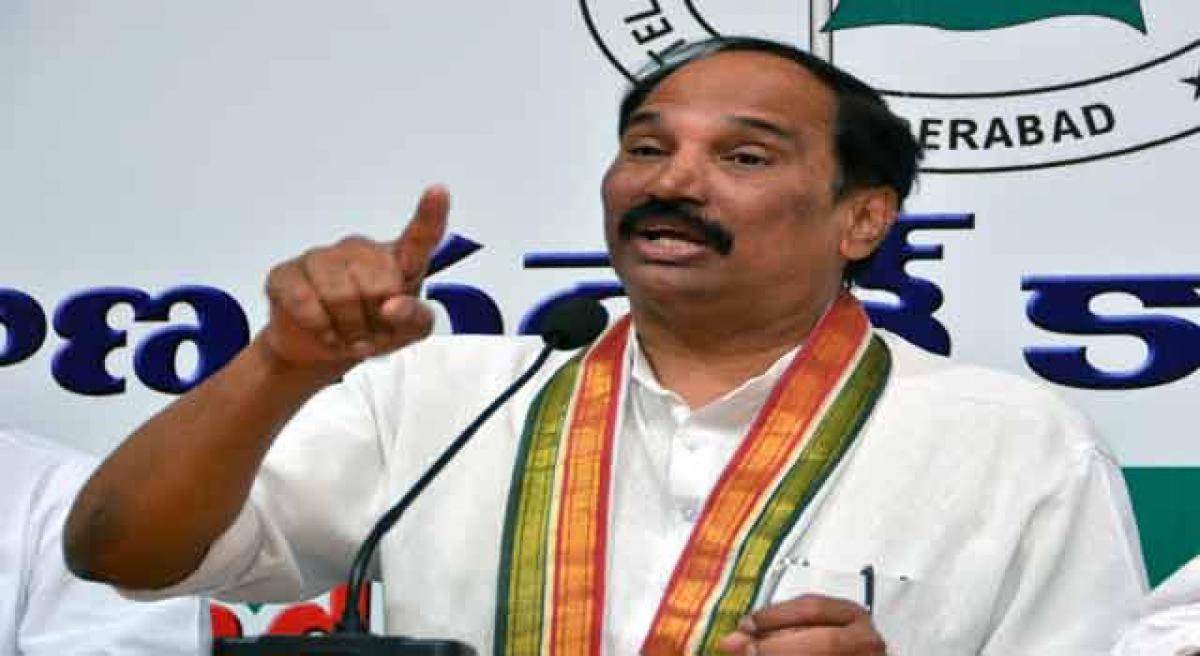 Making it clear that the Congress would extend support to construction of irrigation projects in the State, the Telangana Pradesh Congress Committee (TPCC) asked the Telangana Rashtra Samithi (TRS) government to construct the projects without any irregularities and ‘golmals’ in tenders process.

​Hyderabad: Making it clear that the Congress would extend support to construction of irrigation projects in the State, the Telangana Pradesh Congress Committee (TPCC) asked the Telangana Rashtra Samithi (TRS) government to construct the projects without any irregularities and ‘golmals’ in tenders process.

Speaking to the media at Gandhi Bhavan here on Saturday, TPCC president N Uttam Kumar Reddy, along with vice president Mallu Ravi said the Congress was ready to go anywhere for anything regarding the projects. “Irrigation Minister T Harish Rao was asking the Congress’ stand on Irrigation projects.

We extend our full support to the projects which provide drinking water and irrigation water to the people of the State,” he said. Reminding the Andhra Congress leaders’ obstructions to the formation of separate Telangana State, Mallu Ravi said Harish Rao would not have been the Minister had the Telangana Congress supported creation of Telangana State.

“The ruling party should not forget the Telangana Congress leaders’ efforts in the creation of separate Telangana State. The Chief Minister’s position to K Chandrashekar Rao was due to the Congress’ efforts only,” he said. He also explained that the previous Congress government had allocated Rs 7.5 crore for the survey and DPR of Palamuru Lift Irrigation Scheme.

It was not correct on the part of Harish Rao to criticise the Congress without realising the facts. The Congress government had almost completed four projects by spending thousands of crores of rupees and they would be completed with the allocation of hundreds of crores.

But the TRS government was not releasing such small amounts, he said alleging that the government was keeping aside those projects and passing time while indulging in politics in the name of new projects. He made it clear that the Congress would not keep quiet if the ruling party tried to loot thousands of crores of rupees in the name of projects.

Speaking on the allegation of involvement of Gandhi family in the AugustaWestland scam, he said the NDA government was making baseless allegations against the Gandhi family only to cover up its failures during its two-year rule.

Uttam said the NDA government was raking up AugustaWestland helicopters issue only to sidetrack its failure. He alleged that some section of the media too was indulging in propaganda against the Gandhi family. He alleged that the BJP was resorting to vilification campaign against the Gandhi family, which made sacrifices for the sake of the integrity and unity of the nation.

Reminding that the BJP-ruled States Rajasthan and Chhattisgarh too purchased AugustaWestland helicopters, he said the NDA government, which failed in all sectors came up with Digital India and Make-in-India which had became flop shows.

He said people were keenly observing all the conspiracies hatched by the BJP government and they would teach a fitting lesson to it.