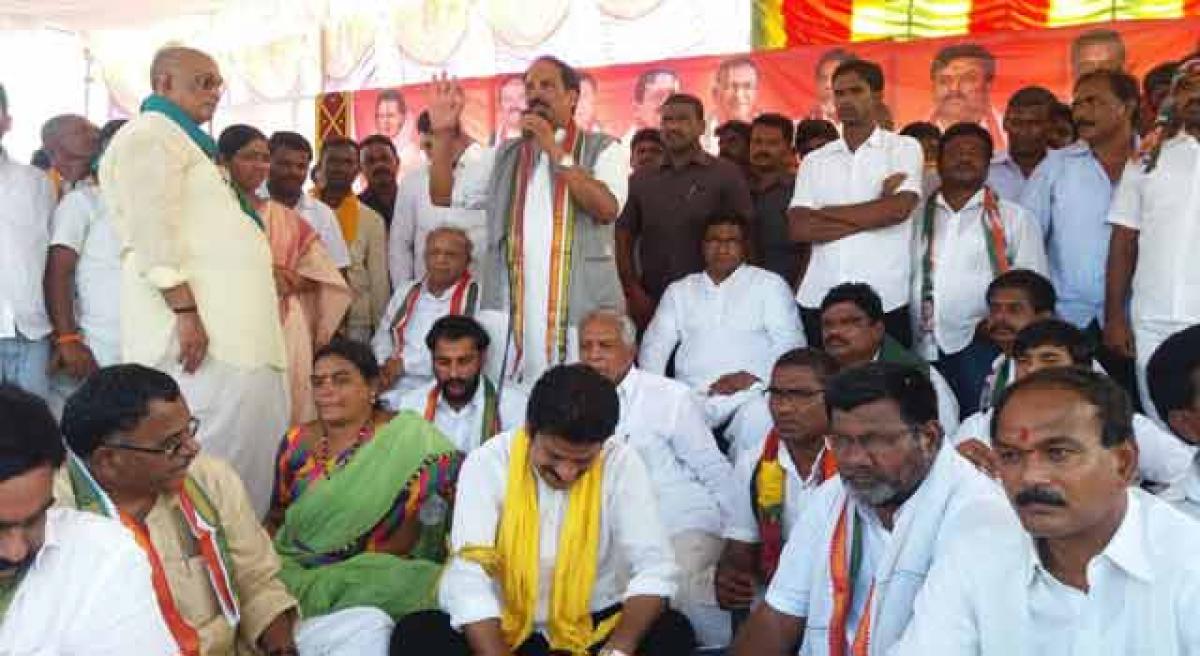 Telangana Congress Committee president N Uttamkumar Reddy said on Monday that he would meet Karnataka Chief Minister Siddaramaiah to solve the Rajolibanda Diversion Scheme (RDS) and speed up its works and also help solve the problems being faced by the locals.

​Mahbubnagar: Telangana Congress Committee president N Uttamkumar Reddy said on Monday that he would meet Karnataka Chief Minister Siddaramaiah to solve the Rajolibanda Diversion Scheme (RDS) and speed up its works and also help solve the problems being faced by the locals.

Speaking during the one day fast of Alampur Congress MLA Sampath Kumar near Sindhur in Aija mandal, demanding completion of RDS and Thummilla projects , along with other TPCC leaders, Reddy alleged that the TRS government was resorting to ‘unprecedented corruption’.

He claimed that the Palamur lift irrigation scheme had been entrusted to Andhra contractors at ‘90 per cent higher rate for securing commission’. Telangana CLP leader K Jana Reddy accused the government of causing anxiety among farmers, while pointing out that it was bound to fulfill the people’s aspirations.

He alleged that the government was working for the benefit of the ruling party, while ignoring public interest. Reddy described the decision to take up the Palamur scheme as ‘illogical’. Former minister D K Aruna warned the government that if it failed to find a solution to the RDS issue by June 2 she would be prepared for any sacrifice.

She claimed that there was a move to cut the cost of the Thummilla propject. Aruna wanted the project to be taken up at the original cost of Rs 835 crore. Alampur Congress MLA Sampath Kumar challenged Chief Minister K Chandrasekhar Rao to stay put at the RDS site to complete its modernisation works.

He alleged that KCR had repeatedly blocked the RDS work ‘for securing commission in collusion with the contractors’. He charged KCR with going back on his assurance of overseeing the RDS work.

The MLA threatened to unseat KCR, expressing resentment towards the government’s indifference to the RDS project. Sampath Kumar alleged that because of the Seemandhra pressure only 28 per cent of the second RDS package and 14 per cent of the first package have been completed.