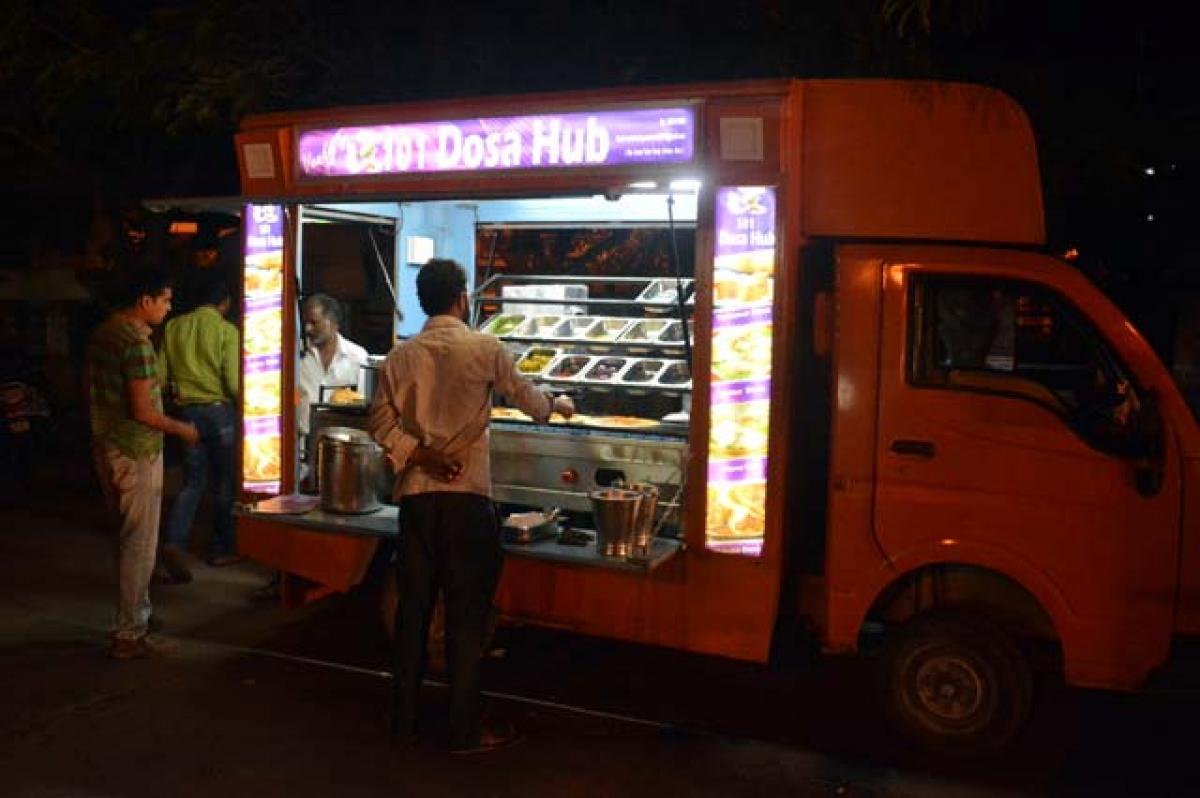 That dosa has been a favourite for Hyderabadis is well known but the way in which it has taken over as everyone’s toast in the recent past, edging out idli, vada and other Udipi fare is something that is baffling even food aficionados.

Hyderabad: That dosa has been a favourite for Hyderabadis is well known but the way in which it has taken over as everyone’s toast in the recent past, edging out idli, vada and other Udipi fare is something that is baffling even food aficionados.

Some attribute the crispiness and golden hue the batter takes in a matter of minutes as the reason, while others say the ease with which one can innovate makes it a winner. Whatever the reason, the Mysorean delight is king and Hyderabadis have taken to it like never before.

In spite of the police imposing restrictions on dosa carts a few days ago to wind up before midnight, the business is thriving. “It is soul food and the mid-way snack before one reaches home. It cannot and should not stop,” said Swetha an IT professional.

Though Ram ki bandi at MJ market comes to mind even before one utters dosa, a recee from 3 to 6 am on Thursday from Tarnaka to Hitec City, Gachibowli to Nampally show that there were close to 100 dosa carts open from 2.30 am each taking home Rs 1500- Rs 8,000 profit every day. Priced between Rs 30-Rs 100, each dosa cart caters to about 100-1000 customers.

The popularity of dosa is also gauged by the number of carts with imaginative names that have sprung up in the city. Interestingly, the traditional dosa with potato filling has made way for other variants such as cheese, butter, paneer, masala, onions and even chicken. The egg dosa too is popular.

But when did the dosa take over the upma, vada and idli and why we asked Raghav, a frequent visitor to the dosa carts, he said “the variety of ingredients that one can use and innovate with the dosa make it a go to, one cannot use cheese and paneer with a vada. Also, it’s crispy and is made then and there.”

By 2.30 at midnight, dosa carts and brightly lit mini vans dot the skyline from Hitec city to Gachibowli. The real business is between 3 am and 4.30 am says Rakesh of Mr Dosawalla at Basheerbagh and the same applies to 99 dosa and 101 dosa at Hitec City.

Software employees while returning from their graveyard shift stopover at these carts for a nibble and zoom off. Mallik, a software professional says, “DLF street at Gachibowli is vibrant thanks to the dosa and other carts, else this place would look deserted. It is the food that is available, always piping hot that makes the day for all of us.”