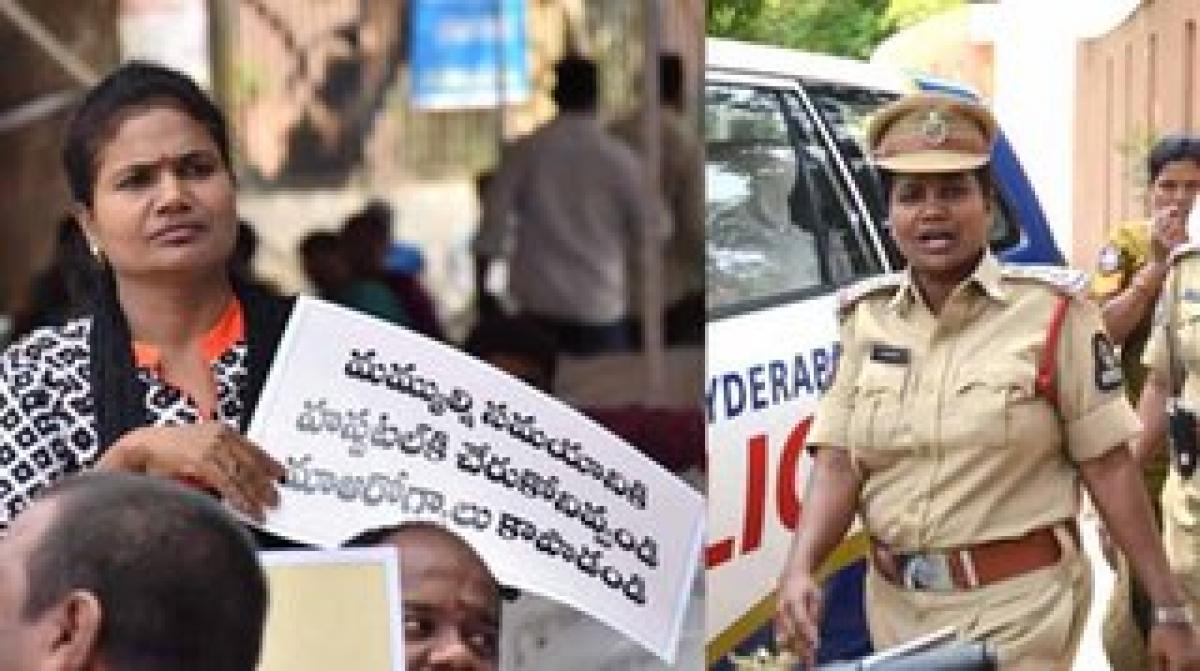 The Hyderabad police have ordered an inquiry in connection with a woman inspector seen holding a placard at a demonstration by locals in support of the Telangana government’s move to shift the ‘Dharna Chowk’.

Hyderabad: The Hyderabad police have ordered an inquiry in connection with a woman inspector seen holding a placard at a demonstration by locals in support of the Telangana government’s move to shift the ‘Dharna Chowk’.

A video of the incident, that went viral on social media and local TV channels, purportedly showed police inspector K Sreedevi and some other women police personnel in plain clothes holding placards during the protest at Dharna Chowk yesterday.

The placards, in Telugu, read “please allow us to reach hospital on time, please save our health”.

Deputy Commissioner of Police (Central Zone) D Joel Davis said today that police personnel, including some in civil clothes, were yesterday deployed at the Dharna Chowk, a popular protest site in the city.

In this regard K Sreedevi, the inspector at Lake police station, was deployed on surveillance duty in civil clothes to keep a watch on any anti-social elements near the protest site.

“It has come to our notice that during the bandobast, Sreedevi was found holding a placard among the protesters (those favouring the shifting of Dharna Chowk),” the DCP said adding an inquiry has been ordered in this regard.

“….pending inquiry she has been withdrawn from the duty of inspector of police at Lake police station with immediate effect and attached to the central zone’s control room,” he said.

A protest against the TRS government’s decision to shift the ‘Dharna Chowk’ had turned violent yesterday.

The opposition Congress, TDP, BJP, Left and others supported the ‘Save Dharna Chowk’ protest organised by the Telangana Joint Action Committee (TJAC).

However, the residents of the surrounding areas and Indira Park Morning Walkers Association backed the government’s move, saying the protests at the place caused traffic jams and inconvenience to them.

The police have registered four cases in connection with yesterday’s violence though no one has been arrested.

A couple of months ago, the TRS government disallowed protests at the chowk, saying they caused inconvenience to the residents. But an alternative site is yet to be finalised.