Officials on mission to clear forest of plastic heaps 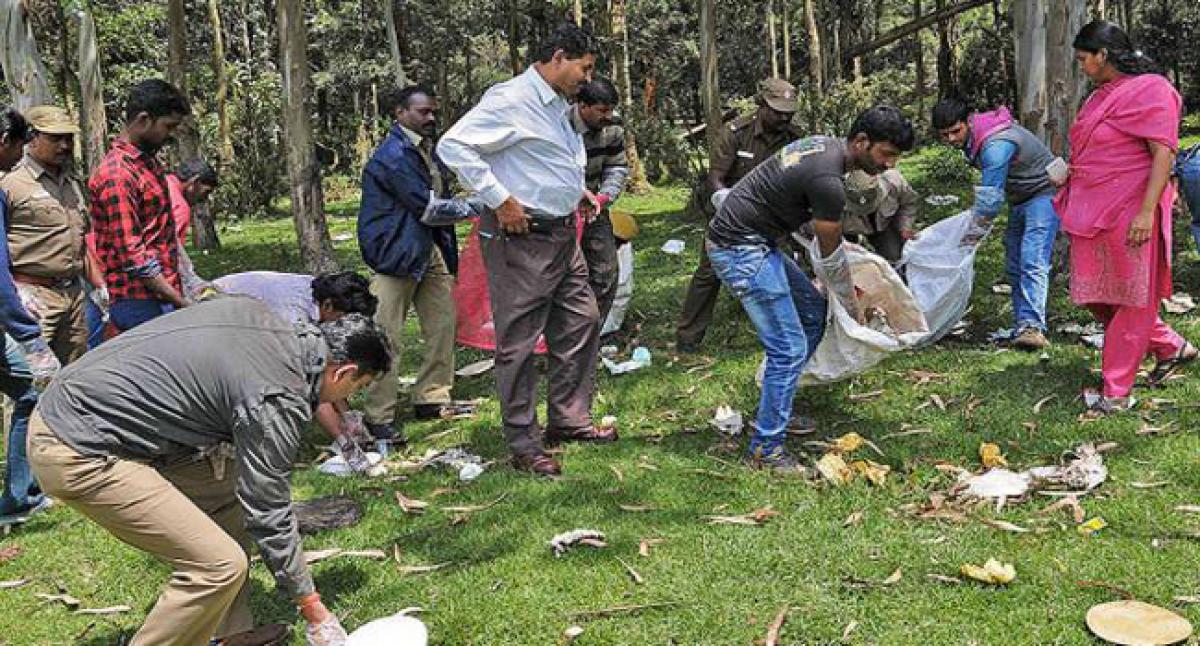 Plastic, which the most environmental hazards, is endangering wild life in Nallamalla forests To overcome this menace, the Nallamall Forest Range officials have embarked on a mission to eradicate plastic and save the wild life in Nagarkurnool district

Nagarkurnool: Plastic, which the most environmental hazards, is endangering wild life in Nallamalla forests. To overcome this menace, the Nallamall Forest Range officials have embarked on a mission to eradicate plastic and save the wild life in Nagarkurnool district.

Plastic is regarded as the most dangerous and serious environmental hazard in urban areas is now creeping into the forest regions and causing a big concern for the Nallamalla Forest officials. The Nallamalla forest regions of Achampet, Amarabad and Srisailam reserve forest areas in Nagarkurnool district are cluttered with plastic waste.

“Every year millions of tourists are traversing across Hyderabad-Srisailam highway. During their travel many stop mid-way to have lunch, or spend some time in the forest. It is during this time many tend to dump plastic in the forest areas. Particularly the plastic litter is found more as the tourists use plastics to carry food, water and other items.

Because of this, the entire forest regions along the highway areas are littered with hazardous plastics. The monkeys, deer and other wild animals in the forest are falling prey to the plastic and many have even lost their lives due to consumption of plastic. To overcome this, we have banned the midway parking of tourists in the forest and strictly banned use of plastics,” said Vinod Kumar, Forest field Director of Amrabad Tiger Reserve Forest.

There have been many wild animals in the forest that have reportedly found dead after feeding on the plastic waste Deer, rabbits, peacocks, monkeys are falling victims of the dangerous plastic litter in the forest.

To stop the menace of plastic in Nallamalla reserve forest areas, the officials have now banned the parking of vehicles along the National highway. For people who wish to spend time in the forest are permitted to halt at only nine spots, where the officials have made elaborate arrangements.

They are Mannanur village under Amrabad mandal to Domalapenta Check post near Srisailam along the stretch of 45 kilometres in the Nallamalla forest. “we have made elaborate arrangements along the 45-kilometre Hyderabad-Srisailam highway at nine points” said the forest officer.