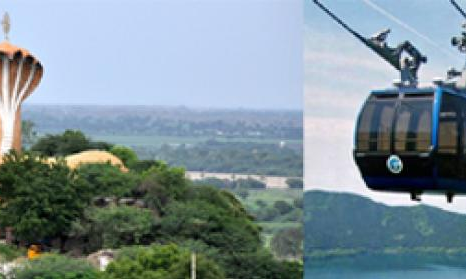 Vemulawada that hitherto flourished as a famous pilgrimage centre will be turned into a tourist destination as well with the proposed ropeway project at Nampally Gutta hillock, the abode of Lakshmi Narasimha Swamy temple, is set to take off soon

Vemulawada (Rajanna-Sircilla): Vemulawada that hitherto flourished as a famous pilgrimage centre will be turned into a tourist destination as well with the proposed ropeway project at Nampally Gutta (hillock), the abode of Lakshmi Narasimha Swamy temple, is set to take off soon.

Nestled on the 116-acre hillock next to Karimnagar-Sircilla highway, 3 kms from Sri Raja Rajeshwara Swamy temple in Vemulawada, the shrine and its precincts offer a serene and spiritual ambience. Since 2015, there has been a proposal to harness its tourism potential by installing a cable car facility to the peak of the temple.

Although representatives of a private ropeway company visited the site and offered proposals to the Tourism Department, the move didn’t get along thereafter. The plan also included construction of a guesthouse that offers a majestic bird's-eye view of the Mid Manair reservoir and Rajanna temple.

The authorities constructed a ghat road to the temple Dharma Gundam (pond) in 2002. From there, it’s a bit difficult for the visitors to climb the steepish steps to reach the main temple.

Against this backdrop, in a recent meeting held with the Vemulawada Temple Area Development Authority (VTADA), Endowments Minister A Indrakiran Reddy has finally given a go-ahead for the project. It was also decided to give 5 acres temple land located near Anupuram road to facilitate ropeway station.

There will be an intermediate station at Dharmagundam level before the cable car moves up to main temple area. The length of the ropeway is said to be one kilometer.

Speaking to The Hans India, VTADA secretary V Bhujanga Rao said: “Although the Rs 5 crore project is formally approved by the minister, the modalities are yet to be chalked out.

The Kolkata-based Ropeway & Resorts Private Limited has expressed its willingness to install the cable car facility.” It’s learnt that the company is ready to take up the work either on Build Operate and Transfer (BOT) mode or Public Private Partnership (PPP) model.

Vemulawada MLA Chennamaneni Ramesh said: “MA&UD Minister KT Rama Rao is keen to turn Vemulawada a tourism hub. Once the modalities are finalised, the authorities will call for tenders. It likely to take three months to complete the tender process.” Work on development of the temple, Koneru, gnana mandapam and cottages will also be initiated soon, he added.