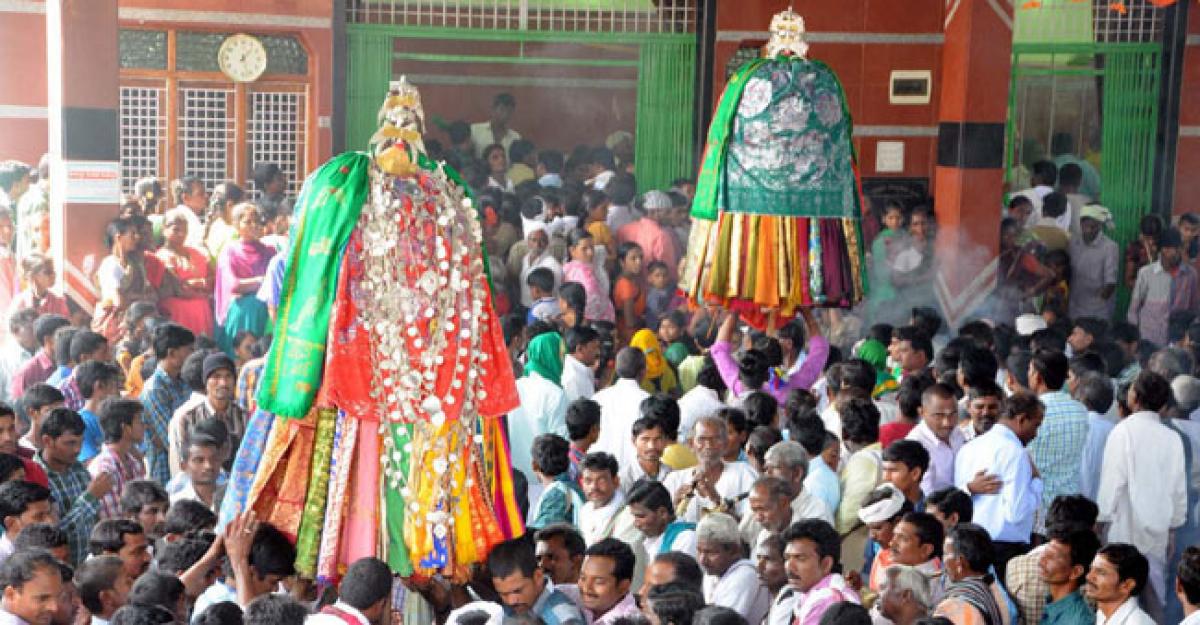 Here in Ruyyadi, a nondescript village in Adilabad district, 310 kms north of Hyderabad, Muharram, peerla panduga in local parlance, is a festival of Hindus

Adilabad: Here in Ruyyadi, a nondescript village in Adilabad district, 310 kms north of Hyderabad, Muharram, peerla panduga in local parlance, is a festival of Hindus.

Yes, you read it right the Ashura that marks the climax of the remembrance of Muharram and commemorates the death of Husayn ibn Ali, the grandson of Prophet Muhammad, in the Battle of Karbala – is for those in this part of tribal hinterland is an inseparable custom for over a century-and-a-half.

You may have heard of quite a few instances of Hindus joining the Muharram, but Hasan-Husayn Devasthanam in Ruyyadi is one such a place where entirety of commemorative observance is carried by Hindus. Ruyyadi of Talamadugu mandal that has sub-2,000 population has just one Muslim family understandably in-charge of carrying the rituals in the devasthanam (temple).

Albeit there was no historical evidence that suggests when and where the 10-day mourning in Ruyyadi, a predominantly tribal region, had begun, the festivity is believed to have embraced by the local tribes and non-tribes during the regime of Nizam.

The beauty of this Mohammedan observance is that it gradually evolved into an Adivasi festival, besides attracting scores of devotees cutting across religions from neighbouring districts and as well as Maharashtra. The three-day festival draws no less 1.50 lakh devotees, including Hindu-Muslims.

Talking to The Hans India, Hasan-Husayn Devasthanam honorary president Loka Bhooma Reddy, who is also the chairman of Telangana State Dairy Development Cooperative Federation, said: “According to the folklore, locals had found a yantra in a snake hole and since then Ruyyadi villagers have been observing the festival tying the yantra to the sawaris (peereelu). The belief is that it augurs well for the villagers who predominantly dependent of agriculture.”

The other interesting fact is that a huge chunk of locals have their children named Ashanna and Ushanna, derived from Hasan and Husayn, it is learnt. The sawaris (peereelu) which represent martyrs Hasan and Husayn go around the village allowing people to pay their respects. On the 10th day of Muharram, devotees would make a wish and they were seen offering sacrifices to the almighty after their wish is fulfilled. It’s learnt that the locals abstain from liquor during the Muharam festivity.

Since the festivity started to draw more and more devotees, the devasthanam committee has reconstructed the temple some four years ago. a guest house and other amenities have also come up for the convenience of devotees in last few years.

The legend says that the annual commemorative is known as Ashura (the 10th day of Muharram), the first month in the Islamic calendar, the day Husayn was martyred. Muslims mourn the death of Imam Husayn and his family, respecting the sacrifice of the martyrs by refraining from all joyous events.

Meanwhile, Ruyyadi is abuzz with thousands of devotees on Friday. Among those dignitaries who turned to the shrine was Minister Jogu Ramanna and District Collector D Divya. It may be noted here that Saturday is the last day of festivity at Ruyyadi.