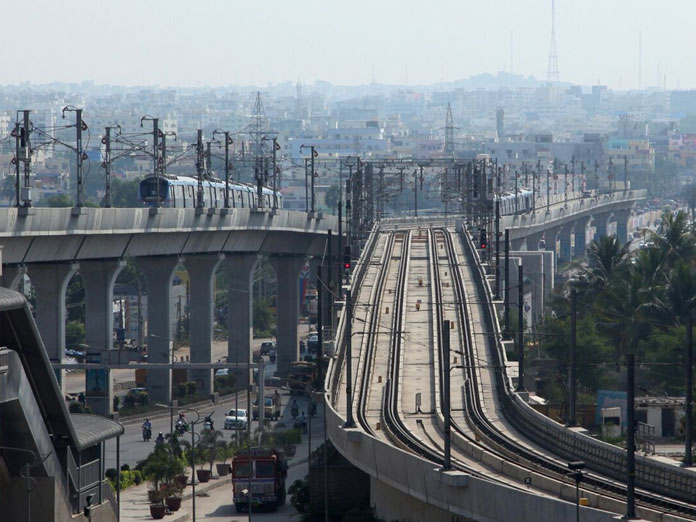 Hyderabad: The much-anticipated Hitech city- Ameerpet corridor of Hyderabad Metro services is yet to commence its services even after 43 days of trial runs. The wait for it seems to be endless as the authorities have not provided any clear answers on the exact date of commencement. Hyderabad Metro had already missed the earlier deadlines of December and January and it is doubtful given the number of works pending at various stations on the corridor.

There are eight stations on the corridor spanning the length of 10 km and most of the road and footpath works and under the Metro stations are yet to be completed. The works for installing escalators, lifts and staircases in many stations are still pending. At Durgam Tank Metro station, the works are done on only one side of the station while the staircases, lifts and escalators on other side are yet to be installed.

At Jubilee Hills Road no.5, the construction works for staircase is still in progress. Beautification work at the metro stations Yousufguda check post and Madhura Nagar is yet to begin. Similarly, there are several works yet to be completed at most of the stations. Added to these hurdles, Hyderabad Metro is yet to receive commissioner of metro rail safety (CMR) certificate to commence services. Before this certificate is issued, a specialist team would inspect trial runs at field level.

It has already been stated that operating the Communication-Based Train Control (CBTC) got complicated owing to the delay in ‘reversal’ viaduct construction. Hence, metro trains would be running on independent single lines from Ameerpet to Jubilee Hills Check Post station and switch lines towards Hi-Tec City station and vice-versa using a mix of conventional railway signalling and CBTC systems.

City commuters, especially those who are working in IT hubs near Hitech city, are eagerly waiting for Metro services to commence. Let’s hope that the Hyderabad Metro authorities speed up things and start the services at the earliest.