The story of change 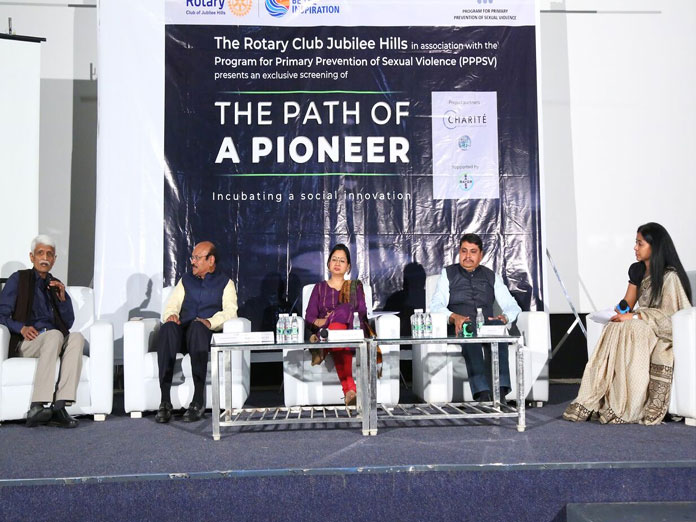 Rotary Club, Jubilee Hills, presented a preview of a documentary on a social innovation Program for Primary Prevention of Sexual Violence PPPSV a...

Rotary Club, Jubilee Hills, presented a preview of a documentary on a social innovation – Program for Primary Prevention of Sexual Violence (PPPSV) - a collaborative initiative of King Edward Memorial Hospital Research Centre, Pune, Berlin Institute of Sexology at the Charité, Bayer Group in India and an advisory council of experts from India. The film screening was conducted at Prasad Labs, on Saturday.

Speaking about the objective of PPPSV, Suhas Joshi, Chair for PPPSV group said “Under PPPSV we believe that one of the ways to fight an epidemic like Child Sexual Abuse is by focusing on prevention. As a society we also need to focus on preventing potential offenders from offending in the first place. Towards this goal, KEM hospital and research centre, Pune has taken up an active step in setting up a treatment centre for non-offending, self-identified, help seeking pedophiles/hebephiles as the first phase of the project. The treatment scope is being implemented along with our collaboration partner The Dunkelfeld Project in Charité, Berlin. So far, the project is showing positive results.”

In 2005, Dr Klaus Beier, renowned sexologist, started the "Prevention Project Dunkelfeld" at the Institute of Sexology and Sexual Medicine at Charité Hospital, Berlin which has now developed into a nationwide network of outpatient clinics providing treatment for self-identifying and help-seeking pedophiles and hebephiles outside of the legal system.