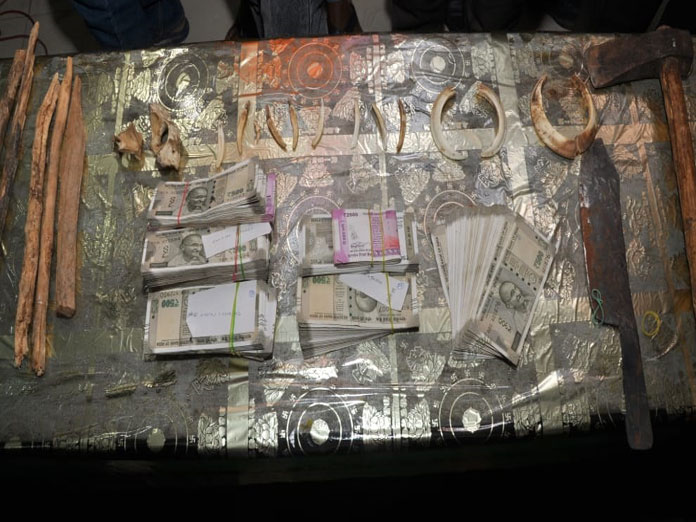 Peddapalli: The Ramagundam CCS and Task Force police officials on Wednesday cracked the sensational case of tiger skin that was obtained in Mandamarri forest of Mancherial district on January 24 by the forest department. They have arrested 16 culprits involved in the case.

Presenting the arrested persons before the media at Peddapalli on Wednesday, Ramagundam Police Commissioner P Satyanarayana said that following the orders from State DGP and Intelligence IG Mahender Reddy, four special teams were appointed under Task Force Circle Inspector Sagar for cracking down the case, under the supervision of Additional DCP (Administration) Ashok Kumar.

The arrested persons are the members of Tiger Hunting and Association, including the association president Kishore Pimpley. Of these 16, three were poachers, four were middlemen and two were animal trackers.

The accused were identified as Md Sharif, T Raja Lingam, N Mallaiah, T Buchhi Rajam, T Shekar, I Anjaiah, Ch Purnachandar, K Pandu, G Suresh, B Bhima, N Kishore Pimpley, Piyush Boarde, Ashwin, Rakesh Chakravarti, T Thomas, and I Lingaiah. According to the CP, after the animal trackers gave the foot prints of the tiger, the 16-member gang trapped it and killed it by electrocution. They were caught while trying to sell the tiger’s nails and skin after consulting Tiger Hunting Association president Ashok Pimpley. Police seized Tata Indica car, Mahendra Scorpio and Rs 4,80,000 along with other materials used for hunting tigers.