TRANSCO employee striving for good use of Bhagavad Gita 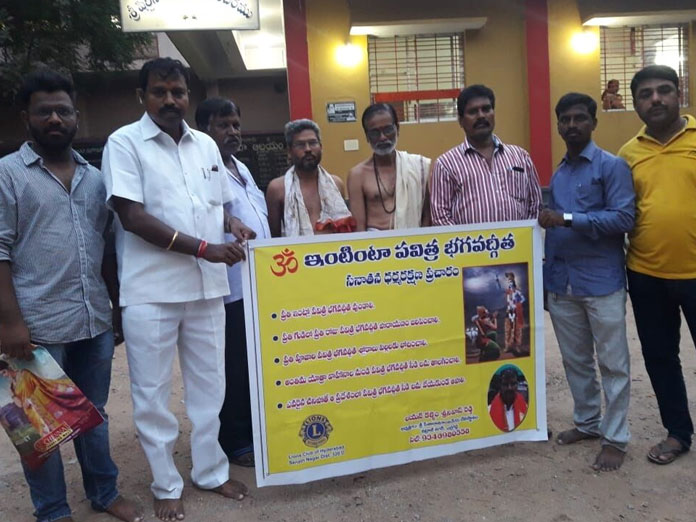 Hyderabad: Aggrieved with the use of Hindus sacred book-the Bhagavad Gita in funeral processions, an employee of TSTRANSCO had taken the responsibility to bring a change and his efforts are now fetching positive results.The Bhagavad Gita is the sacred book of Hindus but of late, the holy book is being used during funeral processions in vehicles and only during a death in a house.

Kallem Srinivas Reddy started his campaign to ensure that the Bhagavad Gita is used at home, at temples and in schools. Srinivas Reddy’s efforts started fetching results as everybody who listened to him started rethinking their choice. An account officer in TSTRANSCO, Srinivas Reddy said that one day while working in his office, he heard Bhagavad Gita.

The voice enthralled him and as he looked from his office, he was saddened to see that the sound was coming from a funeral vehicle. “Bhagavad Gita in the voice of Ghantasala was very pleasing to my ears but when I saw from the window, I was heartbroken to see such a holy book used for funerals. It is also used in houses only during death,” said Srinivas Reddy talking to The Hans India.

This incident made Srinivas Reddy strive for change and immediately, he contacted Smashana Vatika authorities at ESI and explained them the specialty of the Bhagavad Gita. On September 24, 2018, Srinivas Reddy started his campaign, soon after he started noticing positive results as funeral vehicles in the State are now not using Bhagavad Gita.

Srinivas Reddy said that he started this effort from his own house. “Bhagavad Gita has message to everyone in the world. When I started playing Bhagavad Gita in my house, my children asked why I was doing it, but when I explained them they started understanding the Shlokas,” said Srinivas Reddy.

He said that after convincing the authorities in Smashana Vatikas, he started his campaign in temples urging the priests to use Bhagavad Gita after Suprabhatam. Srinivas Reddy also used social media platform to reach out to maximum people. “Along with my friends and few others we started printing pamphlets and posters and distributed them in temples and schools.

As we could not afford to spend more, we decided to use social media to reach out to many more people and this helped us,” said Srinivas Reddy. He said that there are 60 groups on Facebook, which provide connectivity to about 60 lakh people.