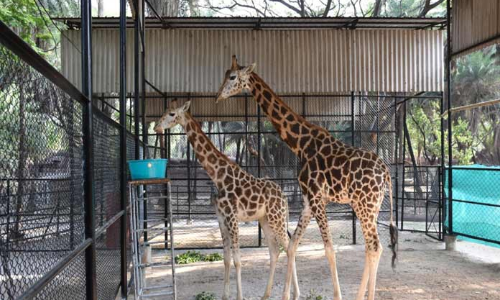 According to officials, these animals were transported by road in specially designed truck and crates. The veterinary wing comprising Dr MA Hakeem, Deputy Director (Veterinary), Dr Navin Kumar, former Deputy Director, Para Vet staff and animal keepers at Nehru Zoological Park, along with veterinary staff and animal keepers from Alipore zoo, accompanied them all along the journey from Kolkata to Nehru Zoological Park in Hyderabad.

The team started on March 4 at from Alipore Zoological Garden, Kolkata, and made stopover at Vizag zoo and Eluru forest complex en route before reaching Hyderabad on March 7. “The giraffes will be kept in the quarantine and will not be exposed to any other person other than veterinary staff and animal keepers till the quarantine period of 4 weeks is over. Then the pair will be released for public display in newly designed enclosure after the completion of period,” N Kshitija, Curator of Zoo informed. “Tsunami Basant, the giraffe present in Zoo park, was brought in 2009 and is extremely happy and is joyous to see its own kind nearly after 10 years,” added the Curator.