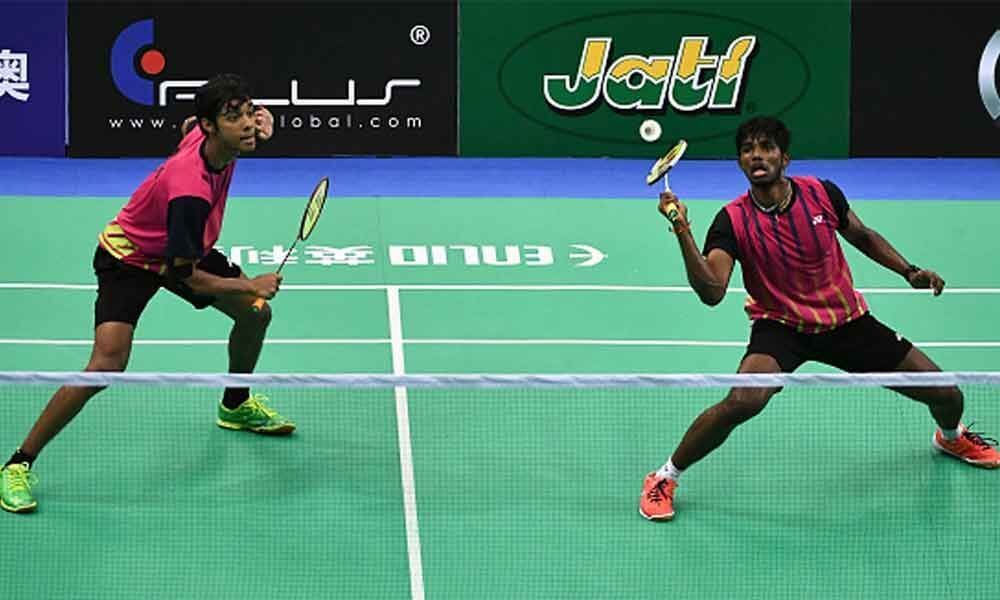 The Indian duo became the first men's doubles pair from the country to win a BWF Super 500 title last Sunday, helping them break into the top 10 ranking.

Chirag and Satwik emerged victorious from a draw that saw the participation of nine of the top-10 world ranked pairs.

Chirag and Satwik came up trumps against reigning world champions Li Jun Hui and Liu Yu Chen in the summit clash at Bangkok. Chirag said their performance in the Thai capital gave them the confidence to win a medal at the World Championship.

"World Championship is next week and we have done well in the run up to the event. Most of the top players participated at Thailand and beating them gave us a big boost.

We know we won't enter as favourites but it does raise hopes of winning a medal now," Chirag said.

"We have the potential to be a World champion. The level of Thailand Open was high. It could have been easily a world championship, so I think we do stand a chance to win a medal," he added.

Chirag said they would look to maintain their top 10 ranking by year end to ensure a Tokyo Olympic qualification.

"Next six months, the aim will be to maintain the top 10 ranking. It will be lot more difficult because all the ranking points that we have scored were from playing in tournaments from September to December last year," said the 22-year-old from Mumbai.

"So the major goal will be to play quarters and semifinals and also look to win another title, that will give us a chance to enter top 5 early next year.

If we are in top 10 by this year end, then we will remain in the top 10 before Tokyo Olympic qualification as we don't have to defend any ranking points early next year because we didn't play from January to April this year," he said.

The duo had reached the semi-finals of the French Open Super 750, quarters of the China Open Super 750 event and final of Syed Modi International before a freak injury to Satwik forced them out for four months.

The injury phase coincided with the departure of Malaysian doubles coach Tan Kim Her, who was responsible for bringing them together.

Chirag said the injury setback had derailed their targets but they battled through the difficult phase to make a successful comeback.

"There were doubts in our minds because for 4-5 months we couldn't play and it was first time we were out of circuit for such a long time.

We didn't know when his injury will heal and when we will be able to resume. Then Tan Kim Her left, leaving a big void. It was a difficult period but we handled it well," he said.

"We started with Brazil Open and though we were not at our best, we won the totle and it gave a good boost. At Sudirman Cup playing three games against world no 6 also gave our confidence back. So soon we got over that phase."

With Tan Kim Her stepping down, Badminton Association of India (BAI) brought in Flandy Limpele as new coach, and Chirag attributed their fitness to the training methods of the Indonesian.

"After Flandy joined, it was difficult for the first month because we couldn't adjust to the physical training.

But gradually we got used to his training method and it made us very fit on court and it helped us during the matches in Thailand," Chirag said.

"We were doing a lot more running and Flandy made us extremely fit and so we were not tired even after playing three games, so multi-feed training has helped, made us more consistent.

"We did lot of drills where we keep on rotating as 40-60 shuttles are thrown and we have to hit and keep moving. So enhanced fitness and better rotation helped us to do well in Thailand."

Chirag also cleared all doubts regarding the fitness of Satwik, who was troubled by his shoulder during the final at Thailand. "Satwik had some shoulder issues.

It was sometimes hurting when he was playing full bloodied smashes, so we were mixing with half smashes and drops. It was not serious. He took a few days rest.