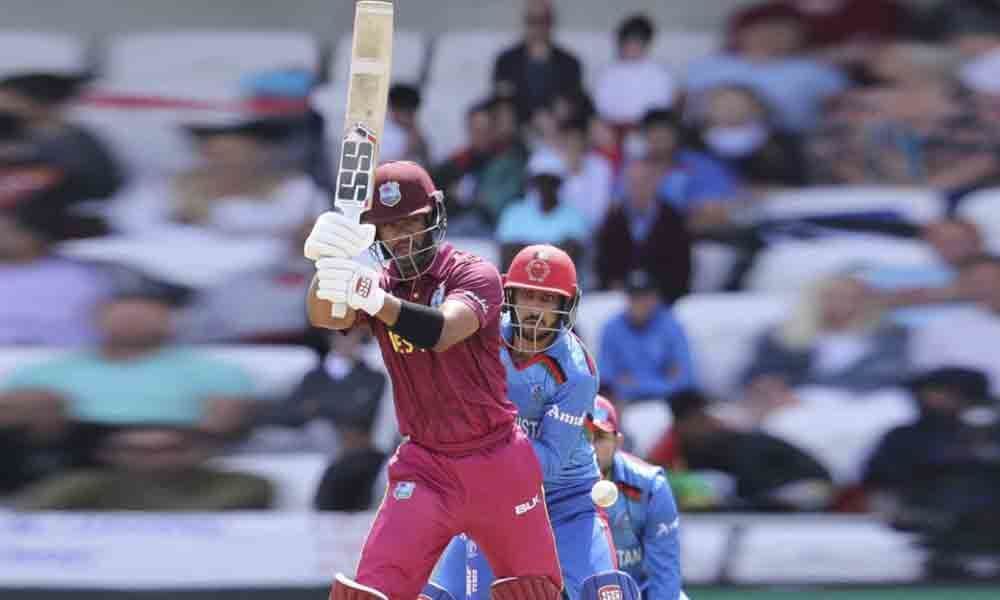 A collective batting effort propelled West Indies to 311/6 against Afghanistan in an inconsequential World Cup group match at the Headingley Cricket Ground here on Thursday.

Opener Evin Lewis (58 off 78 balls), stumper Shai Hope (77 off 92 ablls) and Nicholas Pooran (58 off 43 balls) cracked half-centuries while skipper Jason Holder chipped in with a 34-ball 45 to help the Windies post a handsome total.

For Afghanistan, Dawlat Zadran picked up a couple of wickets but leaked 73 runs from his nine overs, while Sayed Shirzad, Mohammad Nabi and Rashid Khan bagged one wicket each.

Opting to bat first, West Indies lost opener Chris Gayle (7) cheaply when the self-proclaimed 'Universe Boss' chased a full and wide delivery by Zadran only to give a simple catch to Ikram Alikhil behind the stumps.

Lewis and Hope then took control of the proceedings, taking Windies past the 50-run mark in 11.5 overs. The duo kept the scoreboard ticking with some cautious batting as the Caribbean side touched the three-digit mark in 23.4 overs.

But just when the partnership looked settled, Rashid came up with the breakthrough, dismissing Lewis in the 25th over to leave the Windies at 109/2. Lewis' knock was studded with six boundaries and two hits into the stands.

Hope was then involved in a 65-run partnership with Shimron Hetmyer (39 off 31) before Zadran struck again to pack back the latter. Hetmyer smashed three fours and couple of sixes before departing.

Hope also fell soon as Nabi accounted for his wicket to reduce the Windies to 192/4 in the 38th over.

Pooran and Holder then took charge of the proceedings as they swiftly added 105 runs for the fifth wicket, propelling their team near the 300-run mark before they both fell off consecutive deliveries in the final over.

Pooran's knock was laced with six boundaries and a six while Holder clobbered one four and four sixes.

Carlos Brathwaite then hit a quickfire four-ball 14 as the Windies posted a challenging total.