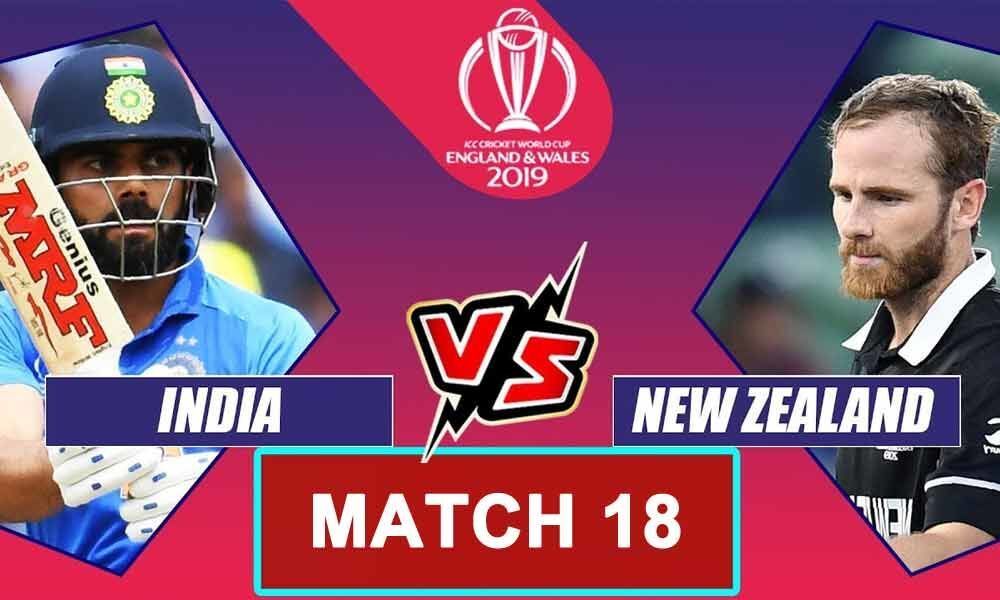 India will take on New Zealand at Nottingham in Match 18 of the ongoing World Cup. Being the only teams to remain unbeaten so far in the tournament, India and New Zealand will look to carry the momentum forward and inch closer towards making it to the semi-finals. Expect sparks to fly when they lock horns on Thursday.

After thumping two tough oppositions, in South Africa and Australia, India will be riding high on confidence. With all three departments motoring in a fantastic state, the men in blue will be backing themselves to overcome the Kiwis on Thursday.

However, the loss of Shikhar Dhawan comes as a major blow to the team ahead of the big clash in Nottingham. The southpaw essayed a match-winning hundred against Australia on Sunday and his services might be dearly missed against New Zealand's quality pace attack. The mantle now majorly lies with Rohit Sharma and Virat Kohli, who would once again be the key to India's batting form.

While KL Rahul is likely to open the innings along with Rohit Sharma, one of Dinesh Karthik and Vijay Shankar is expected to be slotted straight into the no 4 position in the batting lineup.

The bowling, on the other hand, looks well-settled. With Bhuvneshwar Kumar chipping in with crucial wickets against Australia, Mohammed Shami may have to wait a bit more before he finds a spot in the team.

Table toppers New Zealand will have their tails up going into the clash on Thursday. Putting on a thoroughly professional show so far, the blackcaps have registered victories in their previous three encounters to make a strong statement in the competition.

However, after facing Sri Lanka, Bangladesh and Afghanistan until now, the Kane Williamson-led side faces the mighty Indians in their next challenge. The Kiwis will be keen on bringing their best game to the fore and cause a major upset by thrashing title favourites India.

The batting, led by Williamson and Ross Taylor looks in a good shape while the bowling unit is being shouldered well by Matt Henry, Trent Boult and Lockie Ferguson. Also, the team would draw confidence from their laudable performance when they beat India in the recent warm-up fixture between the two sides.

Who will win the match?

With both teams looking in red hot form, the game on Thursday promises to be a humdinger. However, the men in blue look a better side on paper and come as a team that is tough to beat. Expect India to defeat New Zealand and register their third consecutive victory of the tournament.