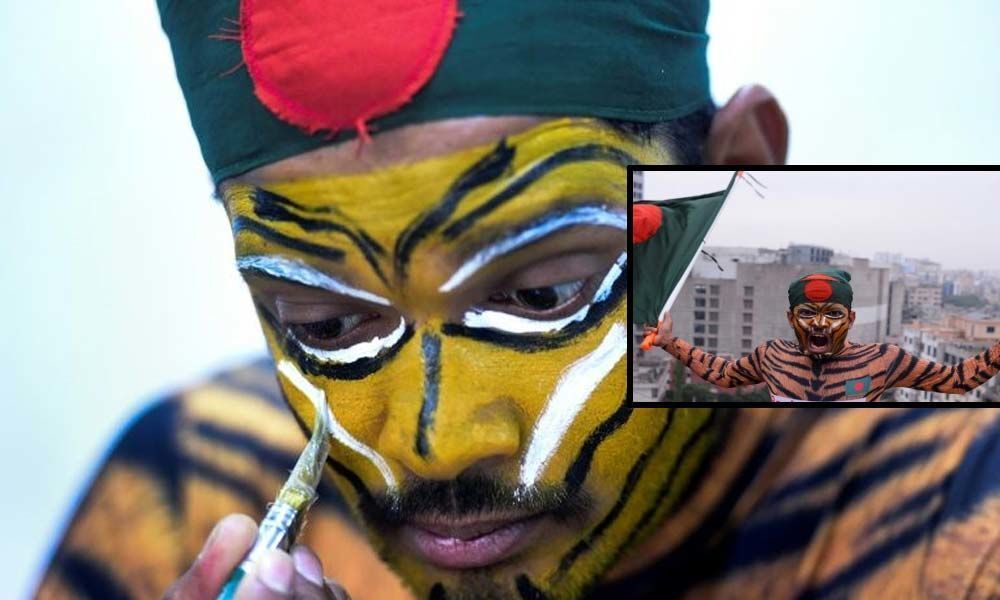 Desperate times call for desperate measures and colourful cricket superfan Shoyab Ali has had to deploy a full arsenal as he follows his beloved Bangladesh around the globe.

Dhaka: Desperate times call for desperate measures and colourful cricket superfan Shoyab Ali has had to deploy a full arsenal as he follows his beloved Bangladesh around the globe.

The 31-year-old Dhaka car mechanic, known at grounds worldwide for his distinctive tiger body and face paint, has injured himself, paid a bribe and spent his life savings to pursue his passion for the game. But Ali insists there has been more gain than pain, and he is determined to become a fixture at the World Cup in England cheering on the South Asian nation, who begin their campaign against South Africa on Sunday. Ali fixed the car of Bangladesh fast bowler Shahdat Hossain who gave him a ticket to his first game, which turned out to be a landmark.

Bangladesh defeated India by five wickets in Dhaka even though Sachin Tendulkar ended his long wait for his 100th international century in the Asia Cup game. "After Bangladesh won, I cried in the stand for a long time. I saw the famous Indian fan Sudhir Gautam," he said, referring to the India superfan who also dons body paint in national colours and has been seen around the world. "I decided I will be like him and watch every game Bangladesh plays," Ali said. Since then Ali, who left school at 13, has missed just one home game and not many abroad. It has brought an innings of adventures.

In his first match abroad in 2013, Ali saw Bangladesh avoid defeat for the first time in a Test in Sri Lanka when they claimed a creditable draw. Before that match, Bangladesh had lost eight Tests in Sri Lanka -- seven by an innings margin. - Ali earns his stripes - He arrived in Sri Lanka with just $250 in his pocket and spent several nights sleeping in the garage of a Sri Lankan fan. Bangladesh players and officials gave him money for food throughout the tour. Travelling to Zimbabwe the same year, Ali left his visa support documents at Dhaka airport. In Harare, the Zimbabwean immigration authorities decided to send him back. The tricks started.

"I bribed an official $10 just to let me make a call. Then I called the Bangladesh team officials to explain my situation. "They were at the training ground and promised to see if they could help," he said. "Then I realised no immigration authority would send back a sick man. "I hit a wall with my head to make myself collapse and acted as though I was unconscious to buy some time. "After spending a night in airport, the Bangladesh officials brought my documents and took me to Harare."

Australia would not give him a visa to go to the 2015 World Cup, but now Bangldesh businesses are happy to sponsor his trips and Ali hopes his presence will help the team in England. "Bangladesh have won most of the matches when I have watched them. I hope I can bring similar luck for them at the World Cup," he said. Ali said he would continue using his tiger face paint despite warnings that it could damage his health. "Many people scare me with skin cancer stories... but I don't care. Nothing is more important to me than my country," he said.