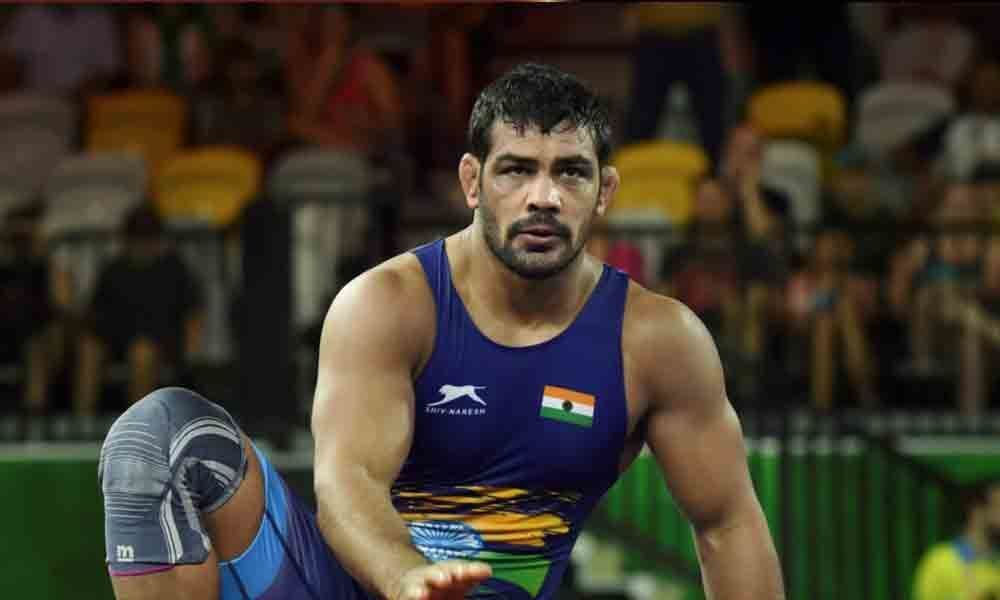 Struggling star Sushil Kumar sealed a berth in India's squad for the World Championship, pipping a spirited Jitender Kumar 4-2 in a bitterly-fought 74kg final of the selection trials here on Tuesday.

Consistent attacks from both the wrestlers in the fast-paced final bout had the fans on the edge of their seats. Close to 1500 gathered at the IGI stadium to watch their favourite star in action.

Sushil opened up a 4-0 lead in the first period and ended up inflicting an eye injury on Jitender early in the second period. Sushil, whose return to the mat after a year at an event in Belarus met with a disappointing end, apologised immediately.

Later, another attacking move from Sushil had Jitender wincing in pain as he suffered an elbow injury. Nevertheless, Jitender did not give up and thrice he had got hold of Sushil's right leg but lack of proper grip meant he could not convert them into points.

The two-time Olympic medallist was feeling the heat and to the discerning, it seemed the two medical breaks he took was a ploy to catch some breath. With two push-out points, Jitender reduced the margin of defeat.

It still is not over for Jitender as the federation has given him the option to book a World Championship berth in 79kg by challenging Tuesday's winner Virdev Gulia.

"Everyone saw how he (Sushil) fought. I was just doing wrestling and he was ... I had trouble seeing after that eye injury. I had prepared well. He was also taking unnecessary breaks," alleged Jitender, his left eye red-shot and elbow wrapped tightly.

"In a day or two I should be fit. I will try to make it to the squad in 79kg," he added. His coach Jaiveer accused Sushil of indulging in unfair practices.

"He did it on purpose. He has been doing it for years. He employed same tactics in the 2012 Olympics. It was definitely deliberate. The referees were also hand in glove. They don't want any other to win against Sushil," alleged Jaiveer.

Sushil, India's only individual double Olympic medallist, though outrightly rejected the charge. "It was not done deliberately. He is like my younger brother. It was a good fight and if such bouts are fought consistently, the country will see good results," said Sushil.

"My style is not rough. My style is to win by technical superiority or pin the opponent. Today the instruction from the coaches was to just win the bout. It's an art to win wrestling bouts. I wish Jitender all the best. He respects me and even touches my feet whenever we meet," he said.

The Wrestling Federation of India (WFI) President Brij Bhushan Sharan Singh also backed Sushil. "It was not rough. When Vinesh Phogat suffered a broken knee, was her opponent rough. It happens in wrestling. No wrestlers comes with hands tied on the wrestling mat," said Singh.

When asked if it was fair on Gulia to be asked to fight again despite winning the trials, WFI assistant secretary Vinod Tomar said, "This is not to favour any one particular wrestler. We want to send a strong team. Jitender is an excellent wrestler and should be given a chance to go to World Championships."

Sushil said he plans to get a training programme abroad approved from the WFI for his preparations for the World Championship, scheduled to be held in Nur-Sultan, Kazakhstan from September 14-22.

Multiple-time national champion Amit Dhankar came a cropper in 74kg as he was no match to the class of Jitender.

The 70kg saw some interesting bouts. Rahul Mann fought intelligently against Majoj but the strategy to playing a waiting game cost him dear in the semifinal against Karan.

In the top half of the draw, Rajneesh faced a stiff challenge from Pankaj Rana before prevailing, but eventually lost to Karan in the final.