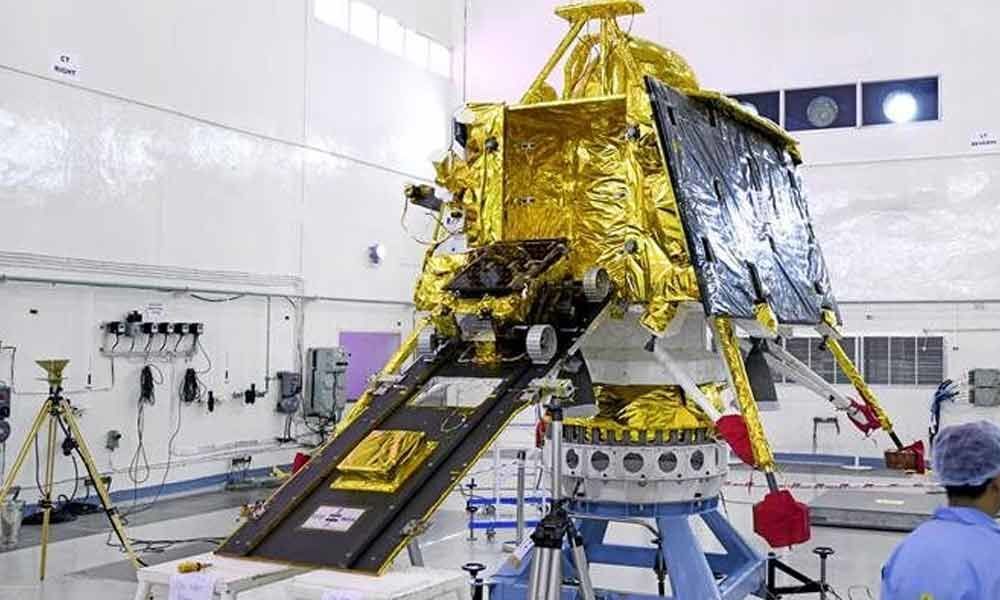 he lift-off of the three-component spacecraft weighing 3,850 kg and comprising an orbiter, the lander and the rover has been scheduled for 2.51 am on Monday from the Satish Dhawan Space Centre (SDSC) at Sriharikota

Sriharikota: Aimed at taking a giant leap in its space programme, India launches its second Moon mission Chandrayaan-2 onboard its heavy-lift rocket GSLV-MkIII, nicknamed Baahubali, from the spaceport here, to land a rover near the unexplored Lunar Southern Pole.

The mission places the three-component spacecraft weighing 3,850 kg and comprising an orbiter, the lander and the rover on the dark side of the Moon

Eleven years after its successful first Lunar mission, the Indian Space Research Organisation (ISRO) launches the Rs 978-crore Chandrayan-2 onboard GSLV-MkIII on a voyage which will then take 54 days to accomplish the task of landing on the Moon through meticulously planned orbital phases.

After a full-dress rehearsal last week, the countdown for the mission commenced on Sunday and scientists were involved in propellant filling, ISRO officials said.

Billed as the most complex and prestigious mission ever undertaken by the ISRO since its inception, Chandrayaan-2 will make India the fourth country to soft land on the lunar surface after Russia, the United States and China. Indicating the challenges involved in soft landing, which will feature a series of critical manoeuvres by scientists, ISRO Chairman K Sivan said they will undergo about "15 minutes of terror (filled moments)." After offering prayers at the hill shrine of Lord Venkateshwara at Tirumala on Saturday, Sivan said all preparations for Chandrayaan-2 were on for the launch scheduled at 2.51 am on July 15.

The Chandrayaan-2 has 13 payloads in total with eight of them in the orbiter, three payloads in Vikram and two in Pragyan. Five payloads are from India, three from Europe, two from the US and one from Bulgaria.

A Laser Retroreflector Array (LRA) of NASA is among the payloads and is aimed at understanding dynamics of Earth's Moon system and deriving clues on Lunar interior.

President Ram Nath Kovind reached Sriharikota on Sunday to witness the launch of the Moon mission.

About 16 minutes after the lift-off, the GSLV MkIII will inject Chandrayan-2 into 170 x 40400 km Earth orbit. From then onwards, the mission will witness a series of manoeuvres by scientists to carry out different phases of the mission. For the first 17 days from lift-off, the spacecraft will be in Earth-bound phase before its orbit is finally raised to over 1.05 lakh km.

After that, it will be nudged into the Lunar Transfer Trajectory taking it to the proximity of Moon in the next two days. Then gradually over the next few days, it will be brought to 100 X 100 km circular orbit when the lender will separate and after another few days of orbiting it will make a soft landing at a chosen place on Lunar surface.