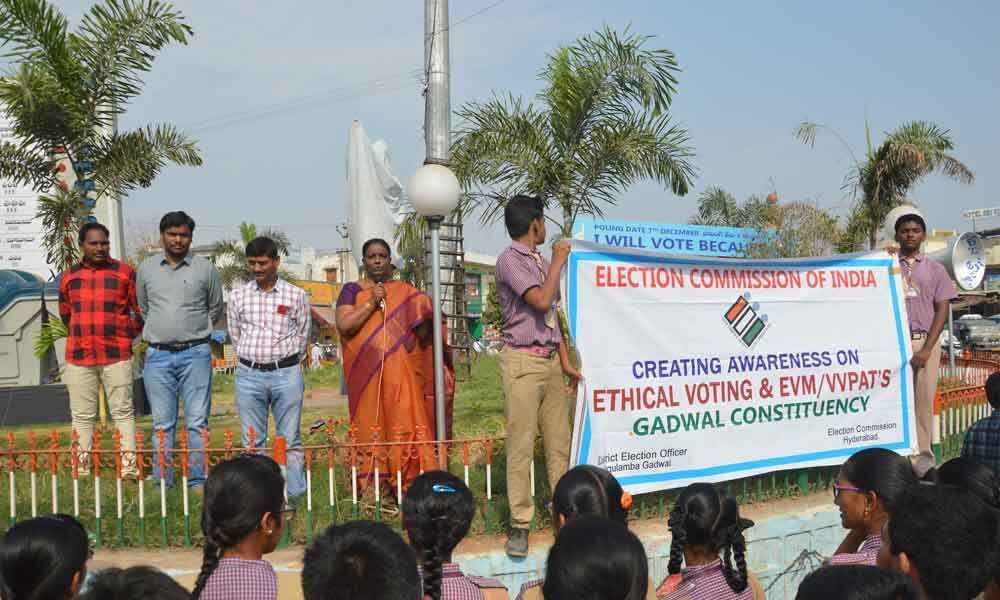 With an aim to create more awareness about the vote and voting rights of the citizens, the district administration along with some of the media houses conducted awareness programmes across erstwhile Mahbubnagar district on Wednesday.

Mahbubnagar: With an aim to create more awareness about the vote and voting rights of the citizens, the district administration along with some of the media houses conducted awareness programmes across erstwhile Mahbubnagar district on Wednesday.

In an awareness programme held Palamuru University (PU), students, teachers along with media representatives took part in a seminar and deliberated on the importance of voting rights and said that people should utilise their votes wisely and elect the right persons who can lead the country onto the path of development and who can respond to the people's problems and issues with utmost concern.

Post Graduate students of the university delivered their speeches with enthusiasm on the importance of vote and voting rights. They reminded the people of their rights and responsibilities with regard to the society and advised them to use their vote wisely to elect the best candidate.

"They said vote is an important weapon in the hands of common man, using which they can dictate terms and change governments. So, every citizen must utilise this opportunity and play a key role in electing right candidate and thereby extend their hand to drive the country onto the right path," observed District Revenue Officer Swarnalatha, while taking part in awareness meet.

Registrar of PU K Girija Mangatayaru, while addressing the students, said that in India 50 per cent of population was youth and the future of the country was in the hands of these youth. And therefore, the youth must come forward and take the responsibility to impress up on the large sections of the society.

"Many a times we have seen people not giving much importance to voting and they prefer to ignore to cast their vote on the election day. This kind of attitude must change. The election day is the only day which our Constitution has given us the opportunity to change our destiny and the destiny of our country by electing the right candidate," said the Registrar.

In Gadwal district, Joint Collector Niranjan took part in a programme to spread the awareness on the topic of ethical voting. He said that people should not fall prey to the offers and gifts given by the political parties and added that it was an unethical practise to take money, gifts or any other favours in return to their votes.

"If any party offers money for vote, people must reject it. If corrupt persons are elected, country will be deprived of development and our future will be at stake," said the Joint Collector.

Later, awareness on Electronic Voting Machines and Voter Verifiable Paper Audit Trails (VVPATs) was held. The authorities cleared the doubts of the people pertaining to functioning of EVMs and VVPATs.

In Kodangal, a voter awareness seminar was held where in DRO of Vikarabad district Motilal took part in the programme and urged the people not to get influenced by money, gifts and favours to cast their votes. He said the people must cast their vote without any favour or fear and must elect the right candidate in the upcoming Parliamentary elections.