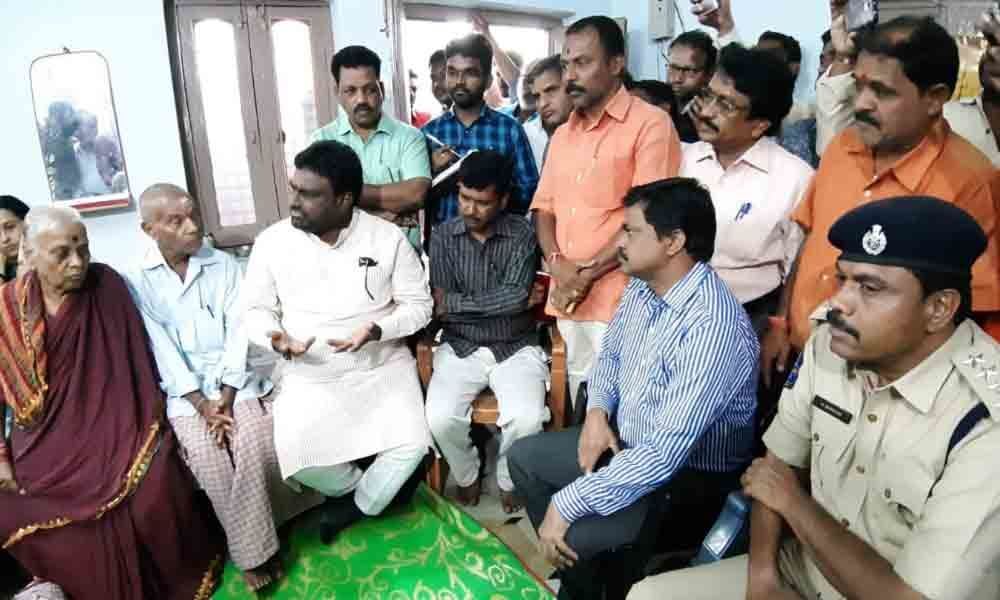 x
National BC Commission Member Achari along with DSP Bhaskar and other members of the Commission consoling the kin of Sri Harshini, in Jadcherla on Thursday
Highlights

The National Backward Classes Commission members called on the parents of Sri Harshini, the Class 10 girl who was reportedly murdered by her Facebook friend, at their home in Jadcherla on Thursday and consoled them.

Mahbubnagar: The National Backward Classes Commission members called on the parents of Sri Harshini, the Class 10 girl who was reportedly murdered by her Facebook friend, at their home in Jadcherla on Thursday and consoled them.

Speaking on the occasion, Achari, one of the members of the BC Commission said that the murder of the innocent girl was unfortunate and demanded that the police must conduct the investigation at a brisk pace and must take similar steps that they had taken in the murder of nine-month-old girl in Warangal and see to it that death sentence was awarded to the accused Y Naveen Reddy.

He said that the Palamuru police, who had resolved the case in just 24 hours, must also file the charge sheets in the court immediately and at the same time, the judiciary and district administration should understand the seriousness of the case and immediately set up a fast track court so that culprit can be awarded capital punishment as early as possible.

"It is really an unfortunate incident. Of late, such inhuman incidents are increasing in the society and it has become a big concern as the people are getting terrified with such incidents of cruelty against the innocent minor girls. The police as well as the civil society must awake and there is a need to take immediate action to contain such incidents in future. Particularly, the girl children must be alert and avoid falling the trap of unknown people," said Achari, expressing his concern.