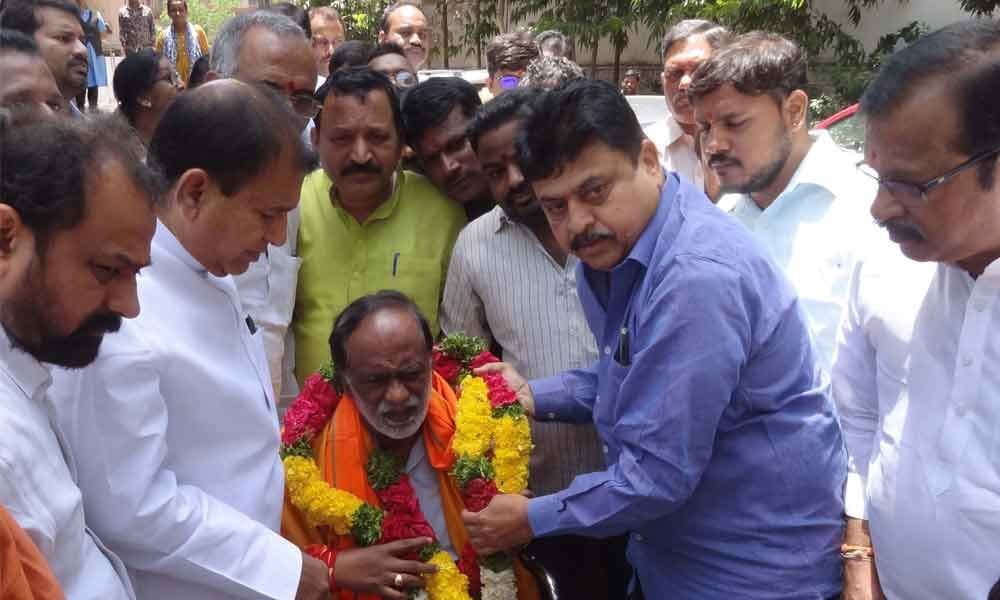 Hyderabad: Bharatiya Janata Party (BJP), which has been organising protests against the Intermediate results alleged goof-up, has decided to visit families of nearly 26 students, who committed suicide after the declaration of results, to console their parents.

BJP State unit president K Laxman made this announcement while talking to the media after his discharge from NIMS here on Saturday. The BJP leader was on hunger strike for five days seeking justice for the students.

"This is a foolish government. We will not rest, and our fight will continue until we get justice for the students and their parents," he said.

The party also planned to meet the National Human Rights Commission (NHRC) over the alleged police detention of the BJP workers and how force was allegedly used to suppress the agitation by students and organisations like the ABVP, the BJP leader added.

Laxman pointed out that the BJP organised protests and waged democratic fight including hunger strike against the government since April 15.

The autocratic and stubborn government tried to suppress dissent and gagged the voice of the opposition by not even allowing the protestors to sit on hunger strike, he fumed.

It is unfortunate that in Telangana, that was formed after relentless agitation, attempts are being made to suppress agitations of any kind, Laxman said.

He had called off his indefinite fast on Friday following an appeal from BJP president Amit Shah and Union Minister of State for Home Hansraj Ahir.

The BJP chief said that Amit Shah and Hansraj Ahir assured him that this fight would be continued at the national level and even Centre would intervene if needed.