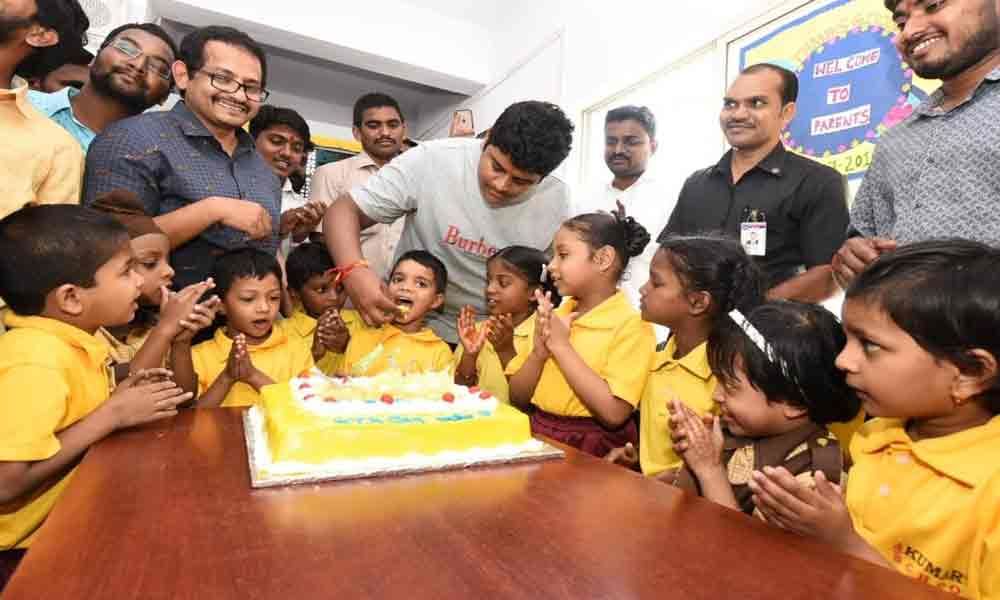 While the TRS working president K T Rama Rao and his family members made his birthday a low-key affair, the party cadre celebrated event by organising blood donation camps, tree plantation and various other philanthropic works on Wednesday.

Hyderabad: While the TRS working president K T Rama Rao and his family members made his birthday a low-key affair, the party cadre celebrated event by organising blood donation camps, tree plantation and various other philanthropic works on Wednesday.

Thousands of people, activists of TRS, Ministers, legislators, professionals, movie personalities, celebrities and many others greeted KTR on his birthday. The #GiftASmileChallenge campaign started by the TRS leader's well-wishers and friends was a huge hit as it encouraged many people to participate and also motivate party cadre to donate generously and gift a smile to the people.

The campaign had started when a well-wisher of KTR donated prosthetic limbs to a person, Praveen, from Nirmal district, who lost both his legs in an accident a few years ago and sought a help from KTR through twitter. He was provided with the necessary assistance.

As the #GiftASmileChallenge was catching up in the next 24 hours, KTR himself tweeted urging people not to bring bouquets, cakes and splurge money on advertisements and hoardings. Instead, he urged his well-wishers to #GiftASmile.

Taking cue from this appeal, thousands of people came forth to donate blood.

TRS MP J Santosh Kumar had adopted a forest in Keesara to develop it. City Mayor B Rammohan donated prosthetic limb to a person from L B Nagar area. Accepting the challenge from MLC Naveen Rao, popular film star Vijay Devarakonda said he would develop a miniforest.

Some people donated notebooks, textbooks, school uniforms, while some enthusiasts donated blood. TRS leader M Rajasekhara Reddy conducted a blood donation camp for the benefit of thalassemia patients. At some other place, KTR's admirers donated grocery and provisions sufficient for one month to an orphanage.

Two persons who were injured in Telangana agitation Shiva and Raju were given Rs 1 Lakh each. KTR's son Himanshu celebrated his father's birthday by organising poor-feeding at Indo-American cancer hospital.