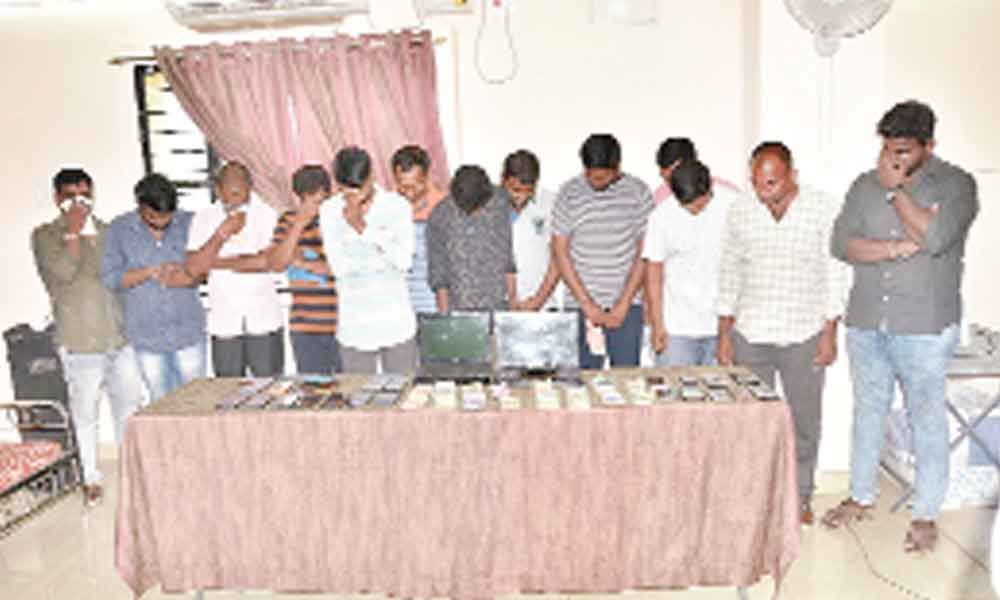 x
Thirteen persons, who are arrested for organising cricket betting at Peddpalli on Saturday.
Highlights

Ramagundam police busted a cricket betting racket and arrested 13 persons and seized Rs 1.08 lakhs, 30 mobiles and two laptops from them

Following the orders of Ramagundam Commissioner of Police V Satyanarayana, who was tipped off about online cricket betting, special teams kept a close eye on those, involved in cricket betting in many areas in the two districts of Peddapalli and Mancherial and nabbed 13 persons and two persons managed to escape.

The Police Commissioner said many youth including others were involved in cricket betting to earn easy money. Students, who are having summer holidays, are placing betting on cricket at tea stalls, bakeries, biryani points and other places in certain colonies.

Special vigil will be kept on such places further along with opening charge sheets against those involved in betting and they will be asked to attend police station every week, he added. Some influential people and police personnel were reportedly supporting such illegal activities.

Any person or police official, who support and involve in such illegal activities will not be spared and will be suspended immediately if they were caught involved in such activities or support either directly or indirectly, the Commissioner warned.

After enquiry, the police found out that Pavan Kabra of Nizamabad and Virat of Maharashtra are running the betting racket with Hyderabad as headquarters.

The police started man hunt in Maharashtra, Nizamabad and Hyderabad deploying special task force for nabbing the main culprits, who are running the betting racket in many areas of Peddapalli and Mancherial districts.