Defection of MLAs : CLP to wage political battle against TRS 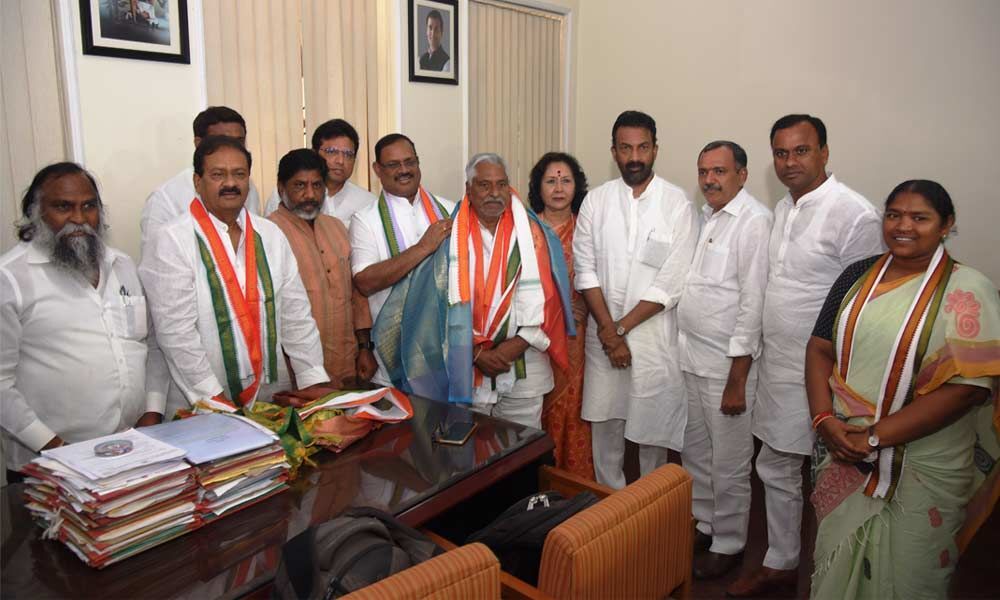 x
Congress Legislature Party, which meets under the leadership of Mallu Bhatti Vikramarka, is confident that people will teach a lesson to the ruling party in Lok Sabha elections
Highlights

Congress Legislature Party, which meets under the leadership of Mallu Bhatti Vikramarka, is confident that people will teach a lesson to the ruling party in Lok Sabha elections

Congress Legislature Party, which meets under the leadership of Mallu Bhatti Vikramarka, is confident that people will teach a lesson to the ruling party in

Lok Sabha elections: Stung by continuous exodus of MLAs from the party, the Congress Legislature Party (CLP), which met here on Friday, decided to wage a fight against the ruling TRS party for encouraging defections.

The CLP also resolved to take both political and legal measures to put an end to politics of defection.

The Congress MLAs met Assembly secretary in the afternoon and submitted a memorandum. According to sources, the Secretary advised the MLAs to submit the memorandum to the Speaker.

Eight MLAs attended the meeting. TPCC president N Uttam Kumar Reddy, who is also an MLA, could not attend the meeting as he is busy campaigning in his home constituency, Nalgonda.

The MLAs felicitated T Jeevan Reddy on his being elected as MLC from the Graduates Constituency in the Legislative Council elections.

The CLP meeting was held in the backdrop of one more MLA J Surender announcing his decision to defect to the TRS. With the number of MLAs, who announced their decision to join the ruling party, rose to 10.

Later addressing the media, Bhatti Vikramarka criticised Chief Minister K Chandrashekar Rao for engineering the defections. He said that the objective of the Chief Minister was to make Narendra Modi Prime Minister again.

He asked the people to teach a lesson to the Chief Minister who has been buying the MLAs belonging to the Opposition party. He said that victory of T Jeevan Reddy in the MLC polls would be a game changer in the State politics.

He said that voters of about 42 Assembly constituencies had taught a lesson to the Chief Minister who has unleashed anarchy in the State in the recently held MLC elections. He said same result would repeat in the Parliament elections.