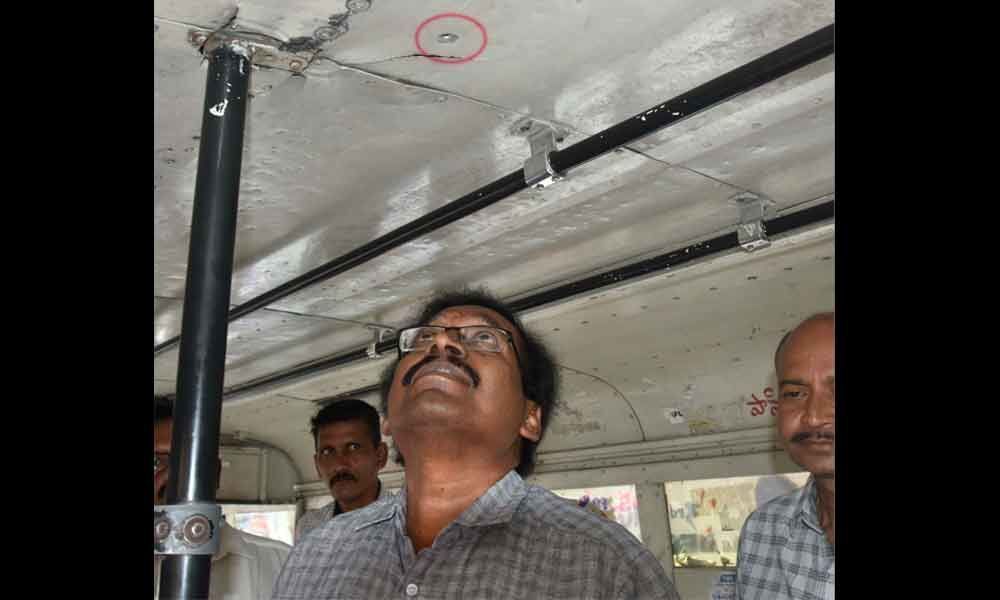 In a shocking incident, a person created panic among the passengers by opening fire in an RTC bus in Hyderabad on Thursday.

Hyderabad: In a shocking incident, a person created panic among the passengers by opening fire in an RTC bus in Hyderabad on Thursday.

The bus route number 47 L of the Ranigunj bus depot was proceeding from Secunderabad to Manikonda when the incident occurred at Nagarjuna circle near Panjagutta.

The accused has been identified as Srinivas, who is a constable in Intelligence security wing of Andhra Pradesh. He was nabbed by the West Zone Task force police.

The incident occurred when the bus halted at the Punjagutta, Nagarjuna circle bus stop, the miscreant was asked to get off the foot-board by a fellow passenger to allow others to board the bus and this led to a heated exchange between the man and the other passenger, consequently miscreant had opened fire.

According to the police, on Thursday afternoon Punjagutta police received a complaint from M Boopathi, (48) TSRTC conductor of Cantonment depot, in which he stated that he along with bus driver by name Mohammed Yakub Pasha was going from Secunderabad to Filmnagar.

Around 11 am near Panjagutta crematorium, he heard a sound like gunfire from the rear side of bus. Immediately, he asked the driver to stop the bus.

He saw one person getting down from the bus from backside exit and hurriedly walked away.

When the conductor went to backside exit he noticed a hole on the top of the bus.

He enquired with a passenger and came to know that on the issue of foot boarding two people had an argument and the man suddenly took out a gun from his bag and fired in the air, triggering panic among the other passengers. The bullet pierced the roof of the bus and the man fled the spot immediately.

After that bus proceeded to Filmnagar and after all passengers alighted, the bus conductor and driver informed the incident to their superiors and lodged a complaint in the police station.

Basing on the complaint police registered a case under sections 307 IPC & 27 Arms Act and Sec-3 of PDPP Act.