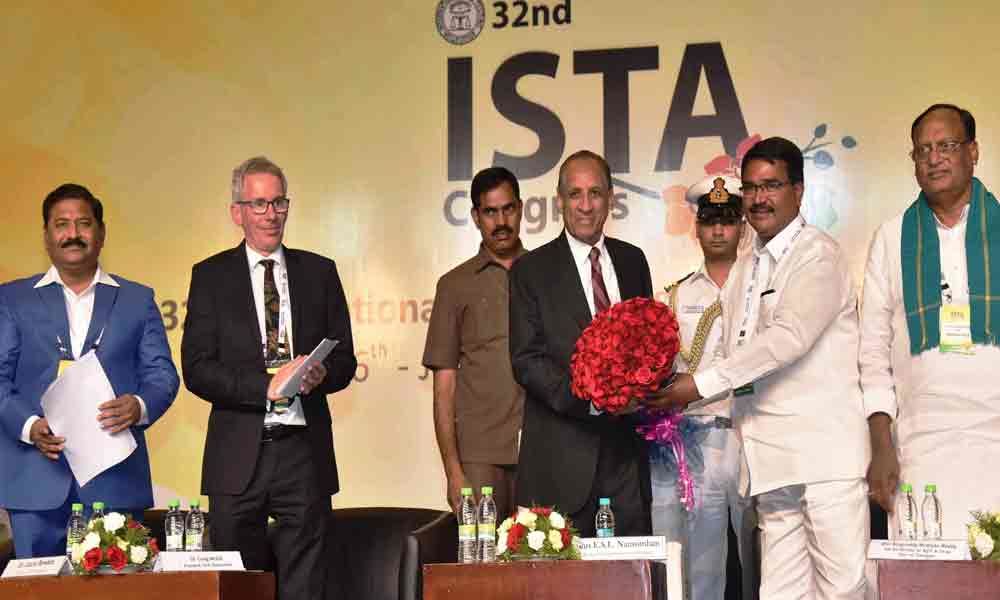 Governor E S L Narasimhan on Friday stressed the need for providing quality seeds to farmers as it would ensure food security.

Hyderabad: Governor E S L Narasimhan on Friday stressed the need for providing quality seeds to farmers as it would ensure food security. Addressing as the Chief Guest at the valedictory session of the ISTA Congress here on Friday, Narasimhan said the agrarian distress had led to farmers migrating to urban areas.

If the migration continued, he asked who would take care of agriculture and provide food to the growing population. It was against this backdrop, he stressed on the importance of supplying quality seeds.

Agriculture Minister S Niranjan Reddy said the State government was making plans for the development of the seed sector in the State to make it as the seed bowl of the world. He said that the State was already supplying seeds to 10 States in the country.

The State was the home for quality seed production with a support system of three lakh skilled human resources engaged in the production of the seeds. Telangana has a net yield of 65 lakh quintals of seed annually. The deliberations at the symposium had enabled Telangana to further reach out to the global markets to export its seeds, he added.

The Minister said the Congress had deliberated on several key issues like 'seed traceability," and stressed the need that the Indian seed industry to work closely with ISTA to prepare for future challenges in quality seed development.

ISTA President Craig McGill said that the seed symposium had focussed on the theme of 'Seed Technology and Quality in a changing world' to take into the future the key issues of the high-quality seeds for food security.

Expressing happiness over the successful conduct of the Congress at Hyderabad, which was the seed capital of India. He said excellent discussions have taken place and hoped they would continue in the future and the new relations forged at the Congress would contribute to the production of the seed quality, he said.

McGill said that the conduct of the ISTA in Telangana which is giving priority to the seed sector development should act as an example for others in the world to take forward the importance of quality seed development into the future.

Deliberations of on different issues relating to the seed development would continue till July 3, as part of the ISTA Congress.