Healthcare has gone for a toss: Bhatti Vikramarka 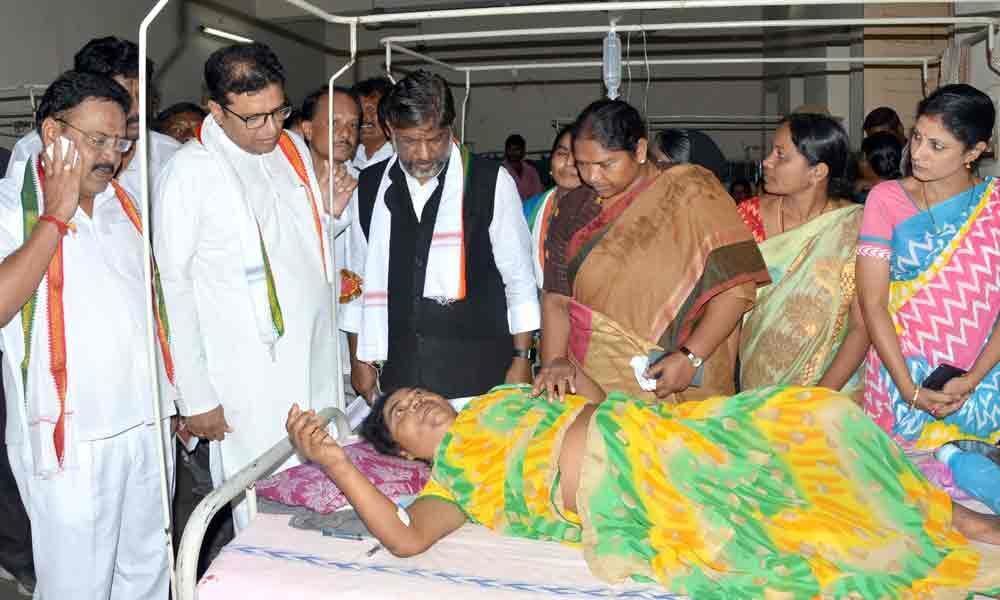 Instead of fighting for the ‘ownership’ title, the time has come for the people’s representatives of the Telangana Rashtra Samithi (TRS) need to open their eyes and fight for wiping out the problems faced by the people, the Congress Legislature Party (CLP) Leader Mallu Bhatti Vikramarka quipped, referring to the Health Minister Eatala Rajender’s ‘outburst’ over his own party.

Warangal/Bhupalpally: Instead of fighting for the 'ownership' title, the time has come for the people's representatives of the Telangana Rashtra Samithi (TRS) need to open their eyes and fight for wiping out the problems faced by the people, the Congress Legislature Party (CLP) Leader Mallu Bhatti Vikramarka quipped, referring to the Health Minister Eatala Rajender's 'outburst' over his own party.

"It's been more than five years since the formation of the State; however, the government is yet to provide better healthcare facilities to the people. The appalling state of affairs in MGM Hospital indicates that the State government had not sanctioned funds for the betterment of the facility," he said. He alleged that the hospital had not procured any new equipment since the TRS government came to power.

"While the people are reeling under viral fevers, dengue, swine flu and other contagious diseases, the government appears to be in deep slumber," he said, referring to the lack of facilities and staff in the hospital.

He said it was ridiculous not to have some basic diagnostic facilities such as complete blood picture (CBP) in a hospital like MGM. He said that there are only six ventilators out of which only two are in working condition, this against the requirement of 40 machines in the 1,000-bedded hospital.

Referring to the Cardiology Department in the hospital, the said it was even in a deplorable state with no surgeon at all. Even the patients who admitted to the hospital with cardiac complaint are being provided primary treatment only, he alleged. He blamed present and erstwhile health ministers – Eatela Rajender and C Laxma Reddy – for the deplorable situation of hospitals.

"If the healthcare situation is like this, Eatela Rajender and other TRS leaders are engaged in a war of words over the the 'ownership' title of the TRS," he said, appealing to the ruling party leaders to focus on patients struggling to get healthcare services after the shutdown of Aarogyasri services by private hospitals.

At least 250-bedded hospital should be there in a district headquarters," Bhatti said. People who lost faith in the healthcare services provided by the government didn't even turning to State-run hospitals, he alleged, stating that there was just out-patient in the hospital when he visited.