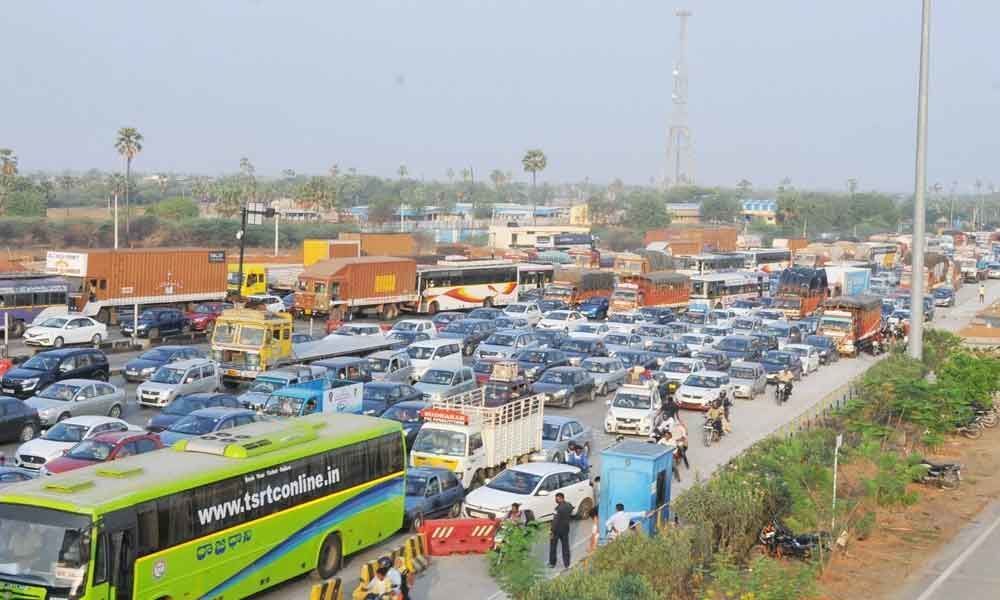 Heavy traffic jam was witnessed at toll plazas including Panthangi Toll Plaza at Choutuppal on Vijayawada National Highway on Wednesday.

Hyderabad: Heavy traffic jam was witnessed at toll plazas including Panthangi Toll Plaza at Choutuppal on Vijayawada National Highway on Wednesday. As both the Telugu States go for polls on Thursday, Andhra Pradesh voters started moving to their native places from Tuesday night.

When the vehicles reached the Panthangi Toll Plaza at Choutuppal in large numbers heavy traffic jam occurred. Cars were stuck in queues for hours and some people even faced difficulties while paying the toll fee.

When the temperatures increased after 10 am, the travellers staged agitations over poor facilities arranged by the toll plaza management and even picked up arguments with the staff. As there was no change in the scene at toll plaza, police rushed to the spot and with the help of the toll gate staff tried to clear the vehicles as soon as possible.

Apart from the counters, the staff started collecting toll fee by going to the vehicles and made efforts to clear the traffic quickly. Enraged travellers demanded cancellation of the toll fee and alternate arrangements to avoid heavy traffic jams on Wednesday.

As the voters rushed to their native places in Andhra Pradesh, the private buses hiked the fares due to which passengers turned towards RTC buses and trains. But when they found heavy rush at MGBS bus stand and Secunderabad, Nampally and Kachiguda Railway stations, they preferred personal vehicles over public transport.