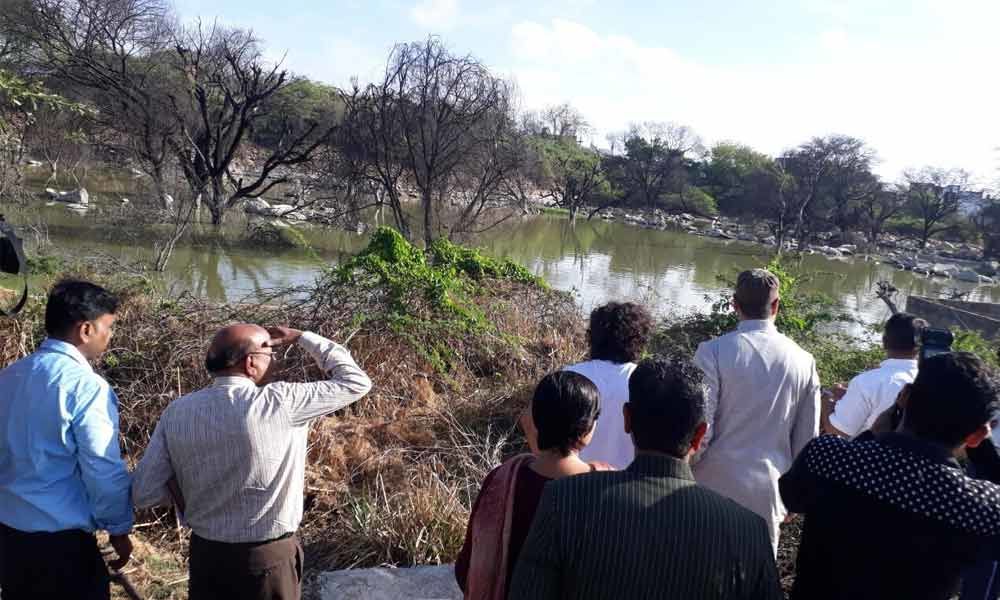 He took stock of the issues raised by the locals about increasing water pollution owing to heavy inflow of sewerage from surrounding areas. He also examined the demarcation of full tank level (FTL) of the water body afresh by authorities.

The top official reached the spot in the wee hours and took note of the grievances of the locals in the presence of the other senior officials of GHMC, Revenue and Irrigation Department.

They informed the PS that that lake water was getting polluted and causing stench due to heavy inflow of the sewer from surrounding areas that make them gasping for air all the time. They alleged that the HMDA had recently revised demarcation of full tank level despite the existence of the older one.

The lake has no inlet channels, catchment area while the second outlet near Janatha Petrol Pump located on Hyderabad-Bangalore National Highway is completely closed. Hence the water body became a source of untreated sewage water.

"GHMC is just scared to make storm-water drainage operational citing one excuse or the other and passing buck to irrigation department," bemoaned Dr Srinivas Reddy, a plot owner of Raghavandra Colony.

Due to the closure of two existing water outlets over the years and with heavy inflow of sewage water into the lake from surrounding colonies, the level of the lake rose up further.

This is also causing a health risk to nearby residents who are crying for a formal sewerage line in their colonies for long. "Instead of making water outlets functional, the GHMC is taking up new FTL work by demolishing the houses even before the re-survey is approved by the government," he contended.

When contacted, assistant executive engineer Vishwam said that the department started fencing works a few days ago around the water body to protect it from encroachments.

"As per the NGT orders, we are moving ahead to preserve the lake. To clean the polluted water here we are roping in a government organisation which will treat the water through the phytoremediation process. The work of fencing will go as usual from Monday."

"As per the NGT orders, we are moving ahead to preserve the lake. To clean the polluted water here we are roping in a government organisation which will treat the water through the phytoremediation process. The work of fencing will go as usual from Monday."

With regard to the FTL, the officer informed that the matter was sub judice at NGT and the higher-ups are looking into the issue.

"The crux of the matter is that the all the government departments are working in collaboration to eliminate the historic water body by allowing encroachments over the natural resource.

The government has informed the National Green Tribunal that the historic lake called 'Bum-Rukn-ud-Daula' doesn't exist over 100 acres and submitted that the extent of area over which the water body exists is barely 17 acres.

Government's ulterior motives behind can easily be understood as it is avoiding release of maps of the survey done by the agency appointed by the government five years ago.

A survey was done by the government appointed agency called RV Consultants in 2014 to determine the full tank level (FTL) of the water body but till now neither the maps have been uploaded on the HMDA or GHMC websites nor the copy was provided to our organization which is a de-facto party in the case pending before NGT," bemoaned Dr Lubna Sarwath, ex-convener, SOUL, an NGO which raised the issue of Bum-Rukn-ud-Doula lake that was taken up suo-moto by the National Green Tribunal.

"At least in the earlier administration, the officials showed some responsibility towards conservation of water bodies. However, the whole situation has turned upside down after the TRS government came to power.

The water body is reeling under encroachments, that too under the noses of GHMC and HMDA and the government is paving way for real estate to thrive on the lake bed, while the people living in surrounding areas are suffering from scarcity of water.

The feeder channels that are supposed to carry rainwater into the lake are closed and the pipeline carrying sewage is opened into the lake," she elaborated.